1 To the chiefe Musician, A Psalme of Dauid. Hold not thy peace, O God of my praise.

3 They compassed mee about also with wordes of hatred: and fought against me without a cause.

4 For my loue, they are my aduersaries: but I giue my selfe vnto prayer.

5 And they haue rewarded me euill for good: and hatred for my loue.

6 Set thou a wicked man ouer him: and let Satan stand at his right hand.

7 When he shall be iudged, let him be condemned: and let his prayer become sinne.

8 Let his dayes be few: and let another take his office.

9 Let his children bee fatherlesse: and his wife a widow.

10 Let his children bee continually vagabonds, & begge: let them seeke their bread also out of their desolate places.

11 Let the extortioner catch all that he hath: and let the strangers spoile his labour.

12 Let there be none to extend mercy vnto him: neither let there be any to fauour his fatherlesse children.

13 Let his posteritie be cut off: and in the generation folowing let their name be blotted out.

14 Let the iniquitie of his fathers be remembred with the Lord: and let not the sinne of his mother be blotted out.

15 Let them be before the Lord continually: that he may cut off the memory of them from the earth.

16 Because that he remembred not to shew mercy, but persecuted the poore and needy man: that he might euen slay the broken in heart.

18 As he clothed himselfe with cursing like as with his garment: so let it come into his bowels like water, and like oyle into his bones.

19 Let it be vnto him as the garment which couereth him: and for a girdle wherewith he is girded continually.

20 Let this be the reward of mine aduersaries from the Lord: and of them that speake euill against my soule.

21 But do thou for me, O God the Lord, for thy Names sake: because thy mercie is good: deliuer thou me.

22 For I am poore and needie: and my heart is wounded within me.

23 I am gone like the shadow, when it declineth: I am tossed vp and downe as the locust.

24 My knees are weake through fasting: and my flesh faileth of fatnesse.

25 I became also a reproch vnto them: when they looked vpon me, they shaked their heads.

26 Helpe me, O Lord my God: O saue me according to thy mercie.

27 That they may know, that this is thy hand: that thou, Lord, hast done it.

28 Let them curse, but blesse thou: when they arise, let them be ashamed, but let thy seruant reioyce.

29 Let mine aduersaries be clothed with shame: and let them couer them selues with their owne confusion, as with a mantle.

30 I will greatly praise the Lord with my mouth: yea I will praise him among the multitude.

31 For he shal stand at the right hand of the poore: to saue him from those that condemne his soule.

1-5. It is the unspeakable comfort of all believers, that whoever is against them, God is for them; and to him they may apply as to one pleased to concern himself for them. David's enemies laughed at him for his devotion, but they could not laugh him out of it.

6-20 The Lord Jesus may speak here as a Judge, denouncing sentence on some of his enemies, to warn others. When men reject the salvation of Christ, even their prayers are numbered among their sins. See what hurries some to shameful deaths, and brings the families and estates of others to ruin; makes them and theirs despicable and hateful, and brings poverty, shame, and misery upon their posterity: it is sin, that mischievous, destructive thing. And what will be the effect of the sentence, "Go, ye cursed," upon the bodies and souls of the wicked! How it will affect the senses of the body, and the powers of the soul, with pain, anguish, horror, and despair! Think on these things, sinners, tremble and repent.

21-31 The psalmist takes God's comforts to himself, but in a very humble manner. He was troubled in mind. His body was wasted, and almost worn away. But it is better to have leanness in the body, while the soul prospers and is in health, than to have leanness in the soul, while the body is feasted. He was ridiculed and reproached by his enemies. But if God bless us, we need not care who curses us; for how can they curse whom God has not cursed; nay, whom he has blessed? He pleads God's glory, and the honour of his name. Save me, not according to my merit, for I pretend to none, but according to thy-mercy. He concludes with the joy of faith, in assurance that his present conflicts would end in triumphs. Let all that suffer according to the will of God, commit the keeping of their souls to him. Jesus, unjustly put to death, and now risen again, is an Advocate and Intercessor for his people, ever ready to appear on their behalf against a corrupt world, and the great accuser.

View All Discussusion for Psalms Chapter 109... 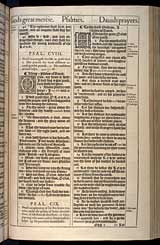