1 O giue thankes vnto the Lord, for hee is good: for his mercie endureth for euer.

2 Let the redeemed of the Lord say so: whome he hath redeemed from the hand of the enemie:

4 They wandred in the wildernes, in a solitary way: they found no citie to dwell in.

5 Hungry and thirstie: their soule fainted in them.

6 Then they cryed vnto the Lord in their trouble: and he deliuered them out of their distresses.

7 And hee led them forth by the right way: that they might goe to a citie of habitation.

8 Oh that men would praise the Lord, for his goodnesse: and for his wonderfull workes to the children of men.

9 For he satisfieth the longing soule: and filleth the hungry soule with goodnesse.

10 Such as sit in darknesse and in the shadowe of death: being bound in affliction and yron:

11 Because they rebelled against the words of God: and contemned the counsell of the most high:

12 Therefore hee brought downe their heart with labour: they fel downe, and there was none to helpe.

13 Then they cryed vnto the Lord in their trouble: and he saued them out of their distresses.

14 Hee brought them out of darkenesse, and the shadowe of death: and brake their bands insunder.

15 Oh that men would praise the Lord for his goodnesse: and for his wonderfull workes to the children of men.

16 For he hath broken the gates of brasse: and cut the barres of yron in sunder.

18 Their soule abhorreth all manner of meate: and they drawe neere vnto the gates of death.

19 Then they crie vnto the Lord in their trouble: he saueth them out of their distresses.

20 Hee sent his word, and healed them: and deliuered them from their destructions.

21 Oh that men would praise the Lord for his goodnesse: and for his wonderfull workes, to the children of men.

22 And let them sacrifice the sacrifices of thankesgiuing: and declare his workes with reioycing.

23 They that goe downe to the sea in shippes: that doe businesse in great waters:

24 These see the workes of the Lord: and his wonders in the deepe.

25 For he commandeth, and raiseth the stormy winde: which lifteth vp the waues thereof.

26 They mount vp to the heauen: they goe downe againe to the depthes: their soule is melted because of trouble.

27 They reele to and fro, and stagger like a drunken man; and are at their wits end.

28 Then they cry vnto the Lord in their trouble: and hee bringeth them out of their distresses.

29 He maketh the storme a calme: so that the waues thereof are still.

30 Then are they glad, because they be quiet: so he bringeth them vnto their desired hauen.

31 Oh that men would praise the Lord for his goodnesse; and for his wonderfull workes to the children of men:

32 Let them exalt him also in the congregation of the people, and praise him in the assembly of the Elders.

33 Hee turneth riuers into a wildernesse: and the water springs into dry ground:

34 A fruitfull land into barrennesse; for the wickednesse of them that dwell therein.

35 He turneth the wildernesse into a standing water: and dry ground into water-springs.

36 And there he maketh the hungry to dwell; that they may prepare a citie for habitation,

37 And sowe the fields, and plant vineyards; which may yeeld fruits of increase.

38 He blesseth them also, so that they are multiplied greatly: and suffreth not their cattell to decrease.

39 Againe, they are minished and brought lowe through oppression, affliction and sorrow.

40 Hee powreth contempt vpon princes: and causeth them to wander in the wildernesse, where there is no way.

41 Yet setteth he the poore on high from affliction: and maketh him families like a flocke.

42 The righteous shall see it, and reioyce; and all iniquitie shall stop her mouth.

43 Who so is wise, and will obserue those things; euen they shall vnderstand the louing kindenesse of the Lord.

1-9 In these verses there is reference to the deliverance from Egypt, and perhaps that from Babylon: but the circumstances of travellers in those countries are also noted. It is scarcely possible to conceive the horrors suffered by the hapless traveller, when crossing the trackless sands, exposed to the burning rays of the sum. The words describe their case whom the Lord has redeemed from the bondage of Satan; who pass through the world as a dangerous and dreary wilderness, often ready to faint through troubles, fears, and temptations. Those who hunger and thirst after righteousness, after God, and communion with him, shall be filled with the goodness of his house, both in grace and glory.

10-16 This description of prisoners and captives intimates that they are desolate and sorrowful. In the eastern prisons the captives were and are treated with much severity. Afflicting providences must be improved as humbling providences; and we lose the benefit, if our hearts are unhumbled and unbroken under them. This is a shadow of the sinner's deliverance from a far worse confinement. The awakened sinner discovers his guilt and misery. Having struggled in vain for deliverance, he finds there is no help for him but in the mercy and grace of God. His sin is forgiven by a merciful God, and his pardon is accompanied by deliverance from the power of sin and Satan, and by the sanctifying and comforting influences of God the Holy Spirit.

17-22 If we knew no sin, we should know no sickness. Sinners are fools. They hurt their bodily health by intemperance, and endanger their lives by indulging their appetites. This their way is their folly. The weakness of the body is the effect of sickness. It is by the power and mercy of God that we are recovered from sickness, and it is our duty to be thankful. All Christ's miraculous cures were emblems of his healing diseases of the soul. It is also to be applied to the spiritual cures which the Spirit of grace works. He sends his word, and heals souls; convinces, converts them, makes them holy, and all by the word. Even in common cases of recovery from sickness, God in his providence speaks, and it is done; by his word and Spirit the soul is restored to health and holiness.

23-32 Let those who go to sea, consider and adore the Lord. Mariners have their business upon the tempestuous ocean, and there witness deliverances of which others cannot form an idea. How seasonable it is at such a time to pray! This may remind us of the terrors and distress of conscience many experience, and of those deep scenes of trouble which many pass through, in their Christian course. Yet, in answer to their cries, the Lord turns their storm into a calm, and causes their trials to end in gladness.

33-43 What surprising changes are often made in the affairs of men! Let the present desolate state of Judea, and of other countries, explain this. If we look abroad in the world, we see many greatly increase, whose beginning was small. We see many who have thus suddenly risen, as suddenly brought to nothing. Worldly wealth is uncertain; often those who are filled with it, ere they are aware, lose it again. God has many ways of making men poor. The righteous shall rejoice. It shall fully convince all those who deny the Divine Providence. When sinners see how justly God takes away the gifts they have abused, they will not have a word to say. It is of great use to us to be fully assured of God's goodness, and duly affected with it. It is our wisdom to mind our duty, and to refer our comfort to him. A truly wise person will treasure in his heart this delightful psalm. From it, he will fully understand the weakness and wretchedness of man, and the power and loving-kindness of God, not for our merit, but for his mercy's sake.

View All Comments for Psalms Chapter 107... 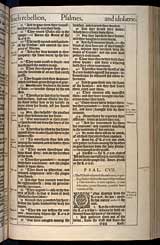