1 Praise ye the Lord. O giue thankes vnto the Lord, for he is good: for his mercie endureth for euer.

2 Who can vtter the mighty acts of the Lord? who can shew foorth all his praise?

3 Blessed are they that keepe iudgement: and he that doeth righteousnesse at all times.

4 Remember me, O Lord, with the fauour that thou bearest vnto thy people: O visite me with thy saluation:

5 That I may see the good of thy chosen, that I may reioyce in the gladnesse of thy nation: that I may glory with thine inheritance.

7 Our fathers vnderstood not thy wonders in Egypt, they remembred not the multitude of thy mercies: but prouoked him at the sea, euen at the Red-sea.

8 Neuerthelesse hee saued them for his Names sake: that hee might make his mighty power to be knowen.

9 He rebuked the Red sea also, and it was dried vp: so hee led them through the depthes, as through the wildernes.

11 And the waters couered their enemies: there was not one of them left.

12 Then beleeued they his words: they sang his praise.

13 They soone forgate his works: they waited not for his counsell:

14 But lusted exceedingly in the wildernes: & tempted God in the desert.

15 And he gaue them their request: but sent leannesse into their soule.

16 They enuied Moses also in the campe: and Aaron the Saint of the Lord.

17 The earth opened and swallowed vp Dathan: and couered the company of Abiram.

18 And a fire was kindled in their company: the flame burnt vp the wicked.

19 They made a calfe in Horeb: and worshipped the molten image.

20 Thus they changed their glory, into the similitude of an oxe that eateth grasse.

21 They forgate God their Sauiour: which had done great things in Egypt:

22 Wonderous workes in the lande of Ham: and terrible things by the red Sea.

24 Yea, they despised the pleasant land: they beleeued not his word:

25 But murmured in their tents: and hearkened not vnto the voyce of the Lord.

26 Therefore he lifted vp his hande against them: to ouerthrow them in the wildernesse:

27 To ouerthrow their seed also among the nations, and to scatter them in the lands.

28 They ioyned themselues also vnto Baal-Peor: and ate the sacrifices of the dead.

29 Thus they prouoked him to anger with their inuentions: and the plague brake in vpon them.

30 Then stood vp Phinehas, and executed iudgement: and so the plague was stayed.

31 And that was counted vnto him for righteousnesse: vnto all generations for euermore.

32 They angred him also at the waters of strife: so that it went ill with Moses for their sakes:

33 Because they prouoked his spirit: so that hee spake vnaduisedly with his lippes.

34 They did not destroy the nations, concerning whom the Lord commanded them:

35 But were mingled among the heathen, and learned their workes.

36 And they serued their idoles: which were a snare vnto them.

37 Yea they sacrificed their sonnes, and their daughters vnto deuils,

38 And shed innocent blood, euen the blood of their sons and of their daughters, whome they sacrificed vnto the idoles of Canaan: and the land was polluted with blood.

40 Therefore was the wrath of the Lord kindled against his people: insomuch that he abhorred his owne inheritance.

41 And he gaue them into the hand of the heathen: and they that hated them, ruled ouer them.

42 Their enemies also oppressed them: and they were brought into subiection vnder their hand.

43 Many times did he deliuer them: but they prouoked him with their counsell, and were brought low for their iniquitie.

44 Neuertheles he regarded their affliction: when he heard their crie.

45 And hee remembred for them his couenant: and repented according to the multitude of his mercies.

46 He made them also to be pitied, of all those that caried them captiues.

47 Saue vs, O Lord our God, and gather vs from among the heathen to giue thankes vnto thy holy Name: and to triumph in thy praise.

48 Blessed bee the Lord God of Israel from euerlasting to euerlasting: and let all the people say, Amen. Praise ye the Lord.

1-5 None of our sins or sufferings should prevent our ascribing glory and praise to the Lord. The more unworthy we are, the more is his kindness to be admired. And those who depend on the Redeemer's righteousness will endeavour to copy his example, and by word and deed to show forth his praise. God's people have reason to be cheerful people; and need not envy the children of men their pleasure or pride.

6-12 Here begins a confession of sin; for we must acknowledge that the Lord has done right, and we have done wickedly. We are encouraged to hope that though justly corrected, yet we shall not be utterly forsaken. God's afflicted people own themselves guilty before him. God is distrusted because his favours are not remembered. If he did not save us for his own name's sake, and to the praise of his power and grace, we should all perish.

13-33 Those that will not wait for God's counsel, shall justly be given up to their own hearts' lusts, to walk in their own counsels. An undue desire, even for lawful things, becomes sinful. God showed his displeasure for this. He filled them with uneasiness of mind, terror of conscience, and self-reproach. Many that fare deliciously every day, and whose bodies are healthful, have leanness in their souls: no love to God, no thankfulness, no appetite for the Bread of life, and then the soul must be lean. Those wretchedly forget themselves, that feast their bodies and starve their souls. Even the true believer will see abundant cause to say, It is of the Lord's mercies that I am not consumed. Often have we set up idols in our hearts, cleaved to some forbidden object; so that if a greater than Moses had not stood to turn away the anger of the Lord, we should have been destroyed. If God dealt severely with Moses for unadvised words, what do those deserve who speak many proud and wicked words? It is just in God to remove those relations that are blessings to us, when we are peevish and provoking to them, and grieve their spirits.

34-48 The conduct of the Israelites in Canaan, and God's dealings with them, show that the way of sin is down-hill; omissions make way for commissions: when they neglected to destroy the heathen, they learned their works. One sin led to many more, and brought the judgments of God on them. Their sin was, in part, their own punishment. Sinners often see themselves ruined by those who led them into evil. Satan, who is a tempter, will be a tormentor. At length, God showed pity to his people for his covenant's sake. The unchangeableness of God's merciful nature and love to his people, makes him change the course of justice into mercy; and no other change is meant by God's repentance. Our case is awful when the outward church is considered. When nations professing Christianity, are so guilty as we are, no wonder if the Lord brings them low for their sins. Unless there is general and deep repentance, there can be no prospect but of increasing calamities. The psalm concludes with prayer for completing the deliverance of God's people, and praise for the beginning and progress of it. May all the people of the earth, ere long, add their Amen.

View All Discussusion for Psalms Chapter 106... 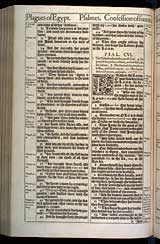