2 Sing vnto him; sing Psalmes vnto him: talke yee of all his wondrous workes.

3 Glory yee in his holy name: let the heart of them reioyce, that seeke the Lord.

4 Seeke the Lord, and his strength: seeke his face euermore.

5 Remember his maruellous workes, that hee hath done: his wonders, and the iudgements of his mouth,

6 O yee seede of Abraham his seruant: yee children of Iacob his chosen.

7 He is the Lord our God: his iudgements are in all the earth.

8 He hath remembred his couenant for euer: the word which he commanded to a thousand generations.

9 Which couenant he made with Abraham, and his oath vnto Isaac:

10 And confirmed the same vnto Iacob for a law: and to Israel for an euerlasting couenant:

11 Saying, Unto thee will I giue the land of Canaan: the lot of your inheritance.

12 When they were but a few men in number: yea very few, & strangers in it.

13 When they went from one nation to another: from one kingdome to another people.

14 He suffred no man to doe them wrong: yea he reproued kings for their sakes:

15 Saying, Touch not mine anointed; and doe my Prophets no harme.

16 Moreouer hee called for a famine vpon the land: he brake the whole staffe of bread.

17 Hee sent a man before them: euen Ioseph, who was sold for a seruant.

18 Whose feete they hurt with fetters: he was layd in iron.

19 Untill the time that his word came: the word of the Lord tried him.

20 The king sent and loosed him: euen the ruler of the people, and let him goe free.

21 Hee made him lord of his house: and ruler of all his substance:

22 To binde his princes at his pleasure: and teach his Senatours wisedome.

23 Israel also came into Egypt: and Iacob soiourned in the land of Ham.

24 And hee increased his people greatly: and made them stronger then their enemies.

25 He turned their heart to hate his people: to deale subtilly with his seruants.

26 Hee sent Moses his seruant: and Aaron whom he had chosen.

27 They shewed his signes among them: and wonders in the land of Ham.

28 Hee sent darknesse, and made it darke: and they rebelled not against his word.

29 Hee turned their waters into blood: and slew their fish.

30 The land brought foorth frogs in abundance: in the chambers of their kings.

31 He spake, and there came diuers sorts of flies: and lice in all their coasts.

32 Hee gaue them haile for raine: and flaming fire in their laud.

33 Hee smote their Uines also, and their figge trees: and brake the trees of their coastes.

34 He spake, and the locusts came: and catterpillers, and that without number,

35 And did eate vp all the herbes in their land: and deuoured the fruite of their ground.

36 Hee smote also all the first borne in their land: the chiefe of all their strength.

37 Hee brought them foorth also with siluer and gold: and there was not one feeble person among their tribes.

38 Egypt was glad when they departed: for the feare of them fell vpon them.

39 He spread a cloud for a couering: and fire to giue light in the night.

40 The people asked, and he brought quailes: and satisfied them with the bread of heauen.

41 He opened the rocke, and the waters gushed out: they ranne in the dry places like a riuer.

42 For he remembred his holy promise: and Abraham his seruant.

43 And he brought forth his people with ioy: and his chosen with gladnesse:

44 And gaue them the lands of the heathen: and they inherited the labour of the people:

45 That they might obserue his statutes, and keepe his Lawes, Praise ye the Lord.

A solemn call to praise and serve the Lord. (1-7) His gracious dealings with Israel. (8-23) Their deliverance from Egypt, and their settlement in Canaan. (24-45)

1-7 Our devotion is here stirred up, that we may stir up ourselves to praise God. Seek his strength; that is, his grace; the strength of his Spirit to work in us that which is good, which we cannot do but by strength derived from him, for which he will be sought. Seek to have his favour to eternity, therefore continue seeking it while living in this world; for he will not only be found, but he will reward those that diligently seek him.

8-23 Let us remember the Redeemer's marvellous works, his wonders, and the judgments of his mouth. Though true Christians are few number, strangers and pilgrims upon earth, yet a far better inheritance than Canaan is made sure to them by the covenant of God; and if we have the anointing of the Holy Spirit, none can do us any harm. Afflictions are among our mercies. They prove our faith and love, they humble our pride, they wean us from the world, and quicken our prayers. Bread is the staff which supports life; when that staff is broken, the body fails and sinks to the earth. The word of God is the staff of spiritual life, the food and support of the soul: the sorest judgment is a famine of hearing the word of the Lord. Such a famine was sore in all lands when Christ appeared in the flesh; whose coming, and the blessed effect of it, are shadowed forth in the history of Joseph. At the appointed time Christ was exalted as Mediator; all the treasures of grace and salvation are at his disposal, perishing sinners come to him, and are relieved by him.

24-45 As the believer commonly thrives best in his soul when under the cross; so the church also flourishes most in true holiness, and increases in number, while under persecution. Yet instruments shall be raised up for their deliverance, and plagues may be expected by persecutors. And see the special care God took of his people in the wilderness. All the benefits bestowed on Israel as a nation, were shadows of spiritual blessings with which we are blessed in Christ Jesus. Having redeemed us with his blood, restored our souls to holiness, and set us at liberty from Satan's bondage, he guides and guards us all the way. He satisfies our souls with the bread of heaven, and the water of life from the Rock of salvation, and will bring us safely to heaven. He redeems his servants from all iniquity, and purifies them unto himself, to be a peculiar people, zealous of good works.

View All Discussusion for Psalms Chapter 105... 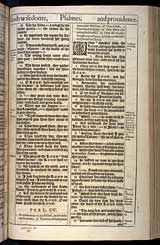