1 The words of Agur the sonne of Iakeh, euen the prophecy: The man spake vnto Ithiel, euen vnto Ithiel and Ucal.

2 Surely I am more brutish then any man, and haue not the vnderstanding of a man.

3 I neither learned wisedome, nor haue the knowledge of the holy.

4 Who hath ascended vp into heauen, or descended? who hath gathered the wind in his fists? who hath bound the waters in a garment? who hath established all the ends of the earth? what is his name, and what is his sonnes name, if thou canst tell?

5 Euery word of God is pure: he is a shield vnto them that put their trust in him.

6 Adde thou not vnto his words, lest he reproue thee, and thou be found a lyar.

7 Two things haue I required of thee, deny me them not before I die.

8 Remoue farre from mee vanity, and lyes; giue me neither pouerty, nor riches, feede me with food conuenient for me.

9 Lest I be full, and deny thee, and say, Who is the Lord? or lest I be poore, and steale, and take the name of my God in vaine.

10 Accuse not a seruant vnto his master; lest he curse thee, and thou be found guilty.

11 There is a generation that curseth their father, and doth not blesse their mother.

12 There is a generation that are pure in their owne eyes, and yet is not washed from their filthinesse.

13 There is a generation, O howe lofty are their eyes! and their eye-lids are lifted vp.

14 There is a generation, whose teeth are as swords, and their iaw-teeth as kniues, to deuoure the poore from off the earth, and the needy from among men.

15 The horse-leach hath two daughters, crying, Giue, giue. There are three things that are neuer satisfied, yea foure things say not, It is enough:

16 The graue; and the barren wombe; the earth that is not filled with water; and the fire that saith not, It is enough.

17 The eye that mocketh at his father, and despiseth to obey his mother; the rauens of the valley shall picke it out, and the young Eagles shall eate it.

18 There be three things which are too wonderfull for me; yea foure, which I know not:

20 Such is the way of an adulterous woman: she eateth, and wipeth her mouth, and saith, I haue done no wickednesse.

21 For three things the earth is disquieted, and for foure which it cannot beare:

22 For a seruant when he reigneth, and a foole when hee is filled with meate:

23 For an odious woman when shee is married, and an handmayd that is heire to her mistresse.

24 There be foure things which are little vpon the earth; but they are exceeding wise:

25 The Ants are a people not strong, yet they prepare their meate in the summer.

26 The conies are but a feeble folke, yet make they their houses in the rocks

27 The locustes haue no king, yet goe they forth all of them by bands.

28 The spider taketh hold with her hands, and is in kings palaces.

29 There be three things which goe well, yea foure are comely in going:

30 A lyon which is strongest among beastes, and turneth not away for any:

31 A gray-hound; an hee-goate also; and a king, against whom there is no rising vp.

32 If thou hast done foolishly in lifting vp thy selfe, or if thou hast thought euill, lay thine hand vpon thy mouth.

1-6 Agur speaks of himself as wanting a righteousness, and having done very foolishly. And it becomes us all to have low thoughts of ourselves. He speaks of himself as wanting revelation to guide him in the ways of truth and wisdom. The more enlightened people are, the more they lament their ignorance; the more they pray for clearer, still clearer discoveries of God, and his rich grace in Christ Jesus. In ver. 4|, there is a prophetic notice of Him who came down from heaven to be our Instructor and Saviour, and then ascended into heaven to be our Advocate. The Messiah is here spoken of as a Person distinct from the Father, but his name as yet secret. The great Redeemer, in the glories of his providence and grace, cannot be found out to perfection. Had it not been for Christ, the foundations of the earth had sunk under the load of the curse upon the ground, for man's sin. Who, and what is the mighty One that doeth all this? There is not the least ground to suspect anything wanting in the word of God; adding to his words opens the way to errors and corruptions.

7-9 Agur wisely prayed for a middle state, that he might be kept at a distance from temptations; he asked daily bread suited to his station, his family, and his real good. There is a remarkable similarity between this prayer and several clauses of the Lord's prayer. If we are removed from vanity and lies; if we are interested in the pardoning love of Christ, and have him for our portion; if we walk with God, then we shall have all we can ask or think, as to spiritual things. When we consider how those who have abundance are prone to abuse the gift, and what it is to suffer want, Agur's prayer will ever be found a wise one, though seldom offered. Food convenient; what is so for one, may not be so for another; but we may be sure that our heavenly Father will supply all our need, and not suffer us to want anything good for us; and why should we wish for more?

10 Slander not a servant to his master, accuse him not in small matters, to make mischief. #11-14|. In every age there are monsters of ingratitude who ill-treat their parents. Many persuade themselves they are holy persons, whose hearts are full of sin, and who practise secret wickedness. There are others whose lofty pride is manifest. There have also been cruel monsters in every age. #15-17|. Cruelty and covetousness are two daughters of the horseleech, that still cry, "Give, give," and they are continually uneasy to themselves. Four things never are satisfied, to which these devourers are compared. Those are never rich that are always coveting. And many who have come to a bad end, have owned that their wicked courses began by despising their parents' authority. #18-20|. Four things cannot be fully known. The kingdom of nature is full of marvels. The fourth is a mystery of iniquity; the cursed arts by which a vile seducer gains the affections of a female; and the arts which a vile woman uses to conceal her wickedness. #21-23| Four sorts of persons are very troublesome. Men of low origin and base spirit, who, getting authority, become tyrants. Foolish and violent men indulging in excesses. A woman of a contentious spirit and vicious habits. A servant who has obtained undue influence. Let those whom Providence has advanced from low beginnings, carefully watch against that sin which most easily besets them. 24-28|. Four things that are little, are yet to be admired. There are those who are poor in the world, and of small account, yet wise for their souls and another world. #29-33|. We may learn from animals to go well; also to keep our temper under all provocations. We must keep the evil thought in our minds from breaking out into evil speeches. We must not stir up the passions of others. Let nothing be said or done with violence, but every thing with softness and calmness. Alas, how often have we done foolishly in rising up against the Lord our King! Let us humble ourselves before him. And having found peace with Him, let us follow peace with all men.

View All Discussusion for Proverbs Chapter 30... 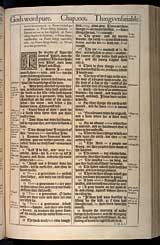