1 The wicked flee when no man pursueth: but the righteous are bolde as a lyon.

2 For the transgression of a land, many are the princes thereof: but by a man of vnderstanding and knowledge the state thereof shall bee prolonged.

3 A poore man that oppresseth the poore, is like a sweeping raine which leaueth no food.

4 They that forsake the law, praise the wicked: but such as keepe the Law, contend with them.

5 Euill men vnderstand not iudgement: but they that seeke the Lord, vnderstand all things.

6 Better is the poore that walketh in his vprightnesse, then he that is peruerse in his wayes, though he be rich.

7 Whoso keepeth the law, is a wise sonne: but he that is a companion of riotous men, shameth his father.

8 He that by vsurie and vniust gaine increaseth his substance, he shall gather it for him that wil pity the poore.

9 He that turneth away his eare from hearing the law, euen his prayer shalbe abomination.

10 Who so causeth the righteous to goe astray in an euill way, he shall fall himselfe into his owne pit: but the vpright shall haue good things in possession.

11 The rich man is wise in his owne conceit: but the poore that hath vnderstanding searcheth him out.

12 When righteous men do reioyce, there is great glory: but when the wicked rise, a man is hidden.

13 He that couereth his sinnes, shall not prosper: but who so confesseth and forsaketh them, shall haue mercie.

14 Happy is the man that feareth always: but he that hardeneth his heart, shall fall into mischiefe.

15 As a roaring lyon and a ranging beare: so is a wicked ruler ouer the poore people.

16 The prince that wanteth vnderstanding, is also a great oppressour: but he that hateth couetousnesse, shall prolong his dayes.

17 A man that doth violence to the blood of any person, shall flie to the pit, let no man stay him.

18 Whoso walketh vprightly, shall be saued: but he that is peruerse in his wayes, shall fall at once.

19 He that tilleth his land, shal haue plentie of bread: but he that followeth after vaine persons, shall haue pouerty enough.

20 A faithfull man shall abound with blessings: but hee that maketh haste to be rich, shall not be innocent.

21 To haue respect of persons, is not good: for, for a piece of bread that man will transgresse.

22 He that hasteth to bee rich, hath an euill eye, and considereth not that pouerty shall come vpon him.

23 He that rebuketh a man, afterwards shall find more fauour, then he that flattereth with the tongue.

24 Who so robbeth his father or his mother, and saith, it is no transgression, the same is the companion of a destroyer.

25 He that is of a proud heart, stirreth vp strife: but he that putteth his trust in the Lord, shalbe made fat.

26 Hee that trusteth in his owne heart, is a foole: but who so walketh wisely, he shall be deliuered.

27 He that giueth vnto the poore, shall not lacke: but he that hideth his eyes, shall haue many a curse.

28 When the wicked rise, men hide themselues: but when they perish, the righteous increase.

1 Sin makes men cowards. Whatever difficulties the righteous meet in the way of duty, they are not daunted. #2|. National sins disturb the public repose. #3|. If needy persons get opportunities of oppressing, their extortion will be more severe than that of the more wealthy. #4|. Wicked people strengthen one another in wicked ways. #5|. If a man seeks the Lord, it is a good sign that he understands much, and it is a good means of understanding more. #6|. An honest, godly, poor man, is better than a wicked, ungodly, rich man; has more comfort in himself, and is a greater blessing to the world. #7|. Companions of riotous men not only grieve their parents, but shame them. #8|. That which is ill got, though it may increase much, will not last long. Thus the poor are repaid, and God is glorified. #9|. The sinner at whose prayers God is angry, is one who obstinately refuses to obey God's commands. #10|. The success of ungodly men is their own misery. #11|. Rich men are so flattered, that they think themselves superior to others. #12|. There is glory in the land when the righteous have liberty. #13|. It is folly to indulge sin, and excuse it. He who covers his sins, shall not have any true peace. He who humbly confesses his sins, with true repentance and faith, shall find mercy from God. The Son of God is our great atonement. Under a deep sense of our guilt and danger, we may claim salvation from that mercy which reigns through righteousness unto eternal life, by Jesus Christ our Lord. #14|. There is a fear which causes happiness. Faith and love will deliver from the fear of eternal misery; but we should always fear offending God, and fear sinning against him. #15|. A wicked ruler, whatever we may call him, this scripture calls a roaring lion, and a ranging bear. #16|. Oppressors want understanding; they do not consult their own honour, ease, and safety. #17|. The murderer shall be haunted with terrors. None shall desire to save him from deserved punishment, nor pity him. 18|. Uprightness will give men holy security in the worst times; but the false and dishonest are never safe. #19|. Those who are diligent, take the way to live comfortably. #20|. The true way to be happy, is to be holy and honest; not to raise an estate suddenly, without regard to right or wrong. #21|. Judgment is perverted, when any thing but pure right is considered. #22|. He that hastens to be rich, never seriously thinks how quickly God may take his wealth from him, and leave him in poverty. #23|. Upon reflection, most will have a better opinion of a faithful reprover than of a soothing flatterer. 24|. Here is the wickedness of those who think it no sin to rob their parents, by wheedling them or threatening them, or by wasting what they have, and running into debt. #25|. Those make themselves always easy, that live in continual dependence upon God and his grace, and live by faith. #26|. A fool trusts to his own strength, merit, and righteousness. And trusts to his own heart, which is not only deceitful above all things, but which has often deceived him. #27|. A selfish man not only will not look out for objects of compassion, but will look off from those that call for his attention. #28|. When power is put into the hands of the wicked, wise men decline public business. If the reader will go diligently over this and the other chapters, in many places where at first he may suppose there is least of Christ, still he will find what will lead to him.

View All Discussusion for Proverbs Chapter 28... 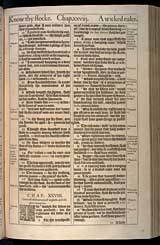