1 As snow in summer, and as raine in haruest: so honour is not seemely for a foole.

2 As the bird by wandring, as the swallow by flying: so the curse causelesse shall not come.

3 A whip for the horse, a bridle for the asse; and a rod for the fooles backe.

4 Answere not a foole according to his folly, lest thou also be like vnto him.

5 Answere a foole according to his folly, lest hee be wise in his owne conceit.

6 He that sendeth a message by the hand of a foole, cutteth off the feete, and drinketh dammage.

7 The legges of the lame are not equall: so is a parable in the mouth of fooles.

8 As hee that bindeth a stone in a sling; so is hee that giueth honour to a foole.

9 As a thorne goeth vp into the hand of a drunkard; so is a parable in the mouth of fooles.

10 The great God that formed all things, both rewardeth the foole, and rewardeth transgressours.

12 Seest thou a man wise in his owne conceit? there is more hope of a foole then of him.

13 The slothfull man sayth, There is a lion in the way, a lion is in the streets.

14 As the doore turneth vpon his hinges: so doeth the slothfull vpon his bedde.

15 The slothfull hideth his hand in his bosome, it grieueth him to bring it againe to his mouth.

16 The sluggard is wiser in his owne conceit, then seuen men that can render a reason.

17 He that passeth by, and medleth with strife belonging not to him, is like one that taketh a dog by the eares.

18 As a mad man, who casteth firebrands, arrowes, and death:

19 So is the man that deceiueth his neighbour, & sayth, Am not I in sport?

20 Where no wood is, there the fire goeth out: so where there is no tale-bearer, the strife ceaseth.

21 As coales are to burning coales, and wood to fire; so is a contentious man to kindle strife.

22 The words of a tale-bearer are as woundes, and they goe downe into the innermost parts of the belly.

23 Burning lips, and a wicked heart, are like a potsheard couered with siluer drosse.

24 Hee that hateth, dissembleth with his lips, and layeth vp deceit within him.

25 When he speaketh faire, beleeue him not: for there are seuen abominations in his heart.

26 Whose hatred is couered by deceit, his wickednesse shall be shewed before the whole congregation.

27 Whoso diggeth a pit, shall fall therein: and he that rolleth a stone, it will returne vpon him.

28 A lying tongue hateth those that are afflicted by it, and a flattering mouth worketh ruine.

1 Honour is out of season to those unworthy and unfit for it. 2|. He that is cursed without cause, the curse shall do him no more harm than the bird that flies over his head. #3|. Every creature must be dealt with according to its nature, but careless and profligate sinners never will be ruled by reason and persuasion. Man indeed is born like the wild ass's colt; but some, by the grace of God, are changed. #4,5|. We are to fit our remarks to the man, and address them to his conscience, so as may best end the debate. #6-9|. Fools are not fit to be trusted, nor to have any honour. Wise sayings, as a foolish man delivers and applies them, lose their usefulness. #10|. This verse may either declare how the Lord, the Creator of all men, will deal with sinners according to their guilt, or, how the powerful among men should disgrace and punish the wicked. #11|. The dog is a loathsome emblem of those sinners who return to their vices, #2Pe 2:22|. #12|. We see many a one who has some little sense, but is proud of it. This describes those who think their spiritual state to be good, when really it is very bad. #13|. The slothful man hates every thing that requires care and labour. But it is foolish to frighten ourselves from real duties by fancied difficulties. This may be applied to a man slothful in the duties of religion. #14|. Having seen the slothful man in fear of his work, here we find him in love with his ease. Bodily ease is the sad occasion of many spiritual diseases. He does not care to get forward with his business. Slothful professors turn thus. The world and the flesh are hinges on which they are hung; and though they move in a course of outward services, yet they are not the nearer to heaven. #15|. The sluggard is now out of his bed, but he might have lain there, for any thing he is likely to bring to pass in his work. It is common for men who will not do their duty, to pretend they cannot. Those that are slothful in religion, will not be at the pains to feed their souls with the bread of life, nor to fetch in promised blessings by prayer. #16|. He that takes pains in religion, knows he is working for a good Master, and that his labour shall not be in vain. #17|. To make ourselves busy in other men's matters, is to thrust ourselves into temptation. #18,19|. He that sins in jest, must repent in earnest, or his sin will be his ruin. #20-22|. Contention heats the spirit, and puts families and societies into a flame. And that fire is commonly kindled and kept burning by whisperers and backbiters. #23|. A wicked heart disguising itself, is like a potsherd covered with the dross of silver. 24-26|. Always distrust when a man speaks fair unless you know him well. Satan, in his temptations, speaks fair, as he did to Eve; but it is madness to give credit to him. #27|. What pains men take to do mischief to others! but it is digging a pit, it is rolling a stone, hard work; and they prepare mischief to themselves. #28|. There are two sorts of lies equally detestable. A slandering lie, the mischief of this every body sees. A flattering lie, which secretly works ruin. A wise man will be more afraid of a flatterer than of a slanderer.

View All Discussusion for Proverbs Chapter 26... 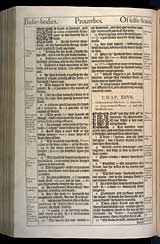