1 Euery wise woman buildeth her house; but the foolish plucketh it downe with her hands.

2 He that walketh in his vprightnesse, feareth the Lord: but he that is peruerse in his wayes, despiseth him.

3 In the mouth of the foolish is a rod of pride: but the lippes of the wise shall preserue them.

4 Where no Oxen are, the crib is cleane: but much increase is by the strength of the Oxe.

6 A scorner seeketh wisedome, and findeth it not: but knowledge is easie vnto him that vnderstandeth.

7 Goe from the presence of a foolish man, when thou perceiuest not in him the lippes of knowledge.

8 The wisedome of the prudent is to vnderstand his way: but the folly of fooles is deceit.

9 Fooles make a mocke at sinne: but among the righteous there is fauour.

10 The heart knoweth his owne bitternesse; and a stranger doth not intermeddle with his ioy.

11 The house of the wicked shall bee ouerthrowen: but the tabernacle of the vpright shall flourish.

12 There is a way which seemeth right vnto a man: but the end thereof are the wayes of death.

13 Euen in laughter the heart is sorrowfull; and the end of that mirth is heauinesse.

14 The backslider in heart shall be filled with his owne wayes: and a good man shall be satisfied from himselfe.

15 The simple beleeueth euery word: but the prudent man looketh well to his going.

16 A wise man feareth, and departeth from euill: but the foole rageth, and is confident.

17 Hee that is soone angry, dealeth foolishly: and a man of wicked deuices is hated.

18 The simple inherite folly: but the prudent are crowned with knowledge.

19 The euill bowe before the good: and the wicked at the gates of the righteous.

20 The poore is hated euen of his owne neighbour: but the rich hath many friends.

21 He that despiseth his neighbour, sinneth: but he that hath mercy on the poore, happy is he.

22 Doe they not erre that deuise euil? but mercy and trueth shall be to them that deuise good.

23 In all labour there is profit: but the talke of the lippes tendeth onely to penury.

24 The crowne of the wise is their riches: but the foolishnesse of fooles is folly.

26 In the feare of the Lord is strong confidence: and his children shall haue a place of refuge.

27 The feare of the Lord, is a fountaine of life, to depart from the snares of death.

29 Hee that is slow to wrath, is of great vnderstanding: but hee that is hasty of spirit, exalteth folly.

30 A sound heart, is the life of the flesh: but enuie, the rottennesse of the bones.

31 Hee that oppresseth the poore, reprocheth his Maker: but hee that honoureth him, hath mercy on the poore.

32 The wicked is driuen away in his wickednes: but the righteous hath hope in his death.

33 Wisedome resteth in the heart of him that hath vnderstanding: but that which is in the midst of fooles, is made knowen.

34 Righteousnes exalteth a nation: but sinne is a reproch to any people.

35 The Kings fauour is toward a wise seruant: but his wrath, is against him that causeth shame.

1 A woman who has no fear of God, who is wilful and wasteful, and indulges her ease, will as certainly ruin her family, as if she plucked her house down. #2|. Here are grace and sin in their true colours. Those that despise God's precepts and promises, despise God and all his power and mercy. #3|. Pride grows from that root of bitterness which is in the heart. The root must be plucked up, or we cannot conquer this branch. The prudent words of wise men get them out of difficulties. #4|. There can be no advantage without something which, though of little moment, will affright the indolent. #5|. A conscientious witness will not dare to represent anything otherwise than according to his knowledge. #6|. A scorner treats Divine things with contempt. He that feels his ignorance and unworthiness will search the Scriptures in a humble spirit. #7|. We discover a wicked man if there is no savour of piety in his discourse. #8|. We are travellers, whose concern is, not to spy out wonders, but to get to their journey's end; to understand the rules we are to walk by, also the ends we are to walk toward. The bad man cheats himself, and goes on in his mistake. #9|. Foolish and profane men consider sin a mere trifle, to be made light of rather than mourned over. Fools mock at the sin-offering; but those that make light of sin, make light of Christ. #10|. We do not know what stings of conscience, or consuming passions, torment the prosperous sinner. Nor does the world know the peace of mind a serious Christian enjoys, even in poverty and sickness. #11|. Sin ruins many great families; whilst righteousness often raises and strengthens even mean families. #12|. The ways of carelessness, of worldliness, and of sensuality, seem right to those that walk in them; but self-deceivers prove self-destroyers. See the vanity of carnal mirth. #14|. Of all sinners backsliders will have the most terror when they reflect on their own ways. #15|. Eager readiness to believe what others say, has ever proved mischievous. The whole world was thus ruined at first. The man who is spiritually wise, depends on the Saviour alone for acceptance. He is watchful against the enemies of his salvation, by taking heed to God's word. #16|. Holy fear guards against every thing unholy. #17|. An angry man is to be pitied as well as blamed; but the revengeful is more hateful. 18|. Sin is the shame of sinners; but wisdom is the honour of the wise. #19|. Even bad men acknowledge the excellency of God's people. #20|. Friendship in the world is governed by self-interest. It is good to have God our Friend; he will not desert us. #21|. To despise a man for his employment or appearance is a sin. #22|. How wisely those consult their own interest, who not only do good, but devise it! #23|. Labour of the head, or of the hand, will turn to some good account. But if men's religion runs all out in talk and noise, they will come to nothing. #24|. The riches of men of wisdom and piety enlarge their usefulness. #25|. An upright man will venture the displeasure of the greatest, to bring truth to light. #26,27|. Those who fear the Lord so as to obey and serve him, have a strong ground of confidence, and will be preserved. Let us seek to this Fountain of life, that we may escape the snares of death. #28|. Let all that wish well to the kingdom of Christ, do what they can, that many may be added to his church. #29|. A mild, patient man is one that learns of Christ, who is Wisdom itself. Unbridled passion is folly made known. #30|. An upright, contented, and benevolent mind, tends to health. #31|. To oppress the poor is to reproach our Creator. #32|. The wicked man has his soul forced from him; he dies in his sins, under the guilt and power of them. But godly men, though they have pain and some dread of death, have the blessed hope, which God, who cannot lie, has given them. #33|. Wisdom possesses the heart, and thus regulates the affections and tempers. #34|. Piety and holiness always promote industry, sobriety, and honesty. #35|. The great King who reigns over heaven and earth, will reward faithful servants who honour his gospel by the proper discharge of the duties of their stations: he despises not the services of the lowest.

View All Discussusion for Proverbs Chapter 14... 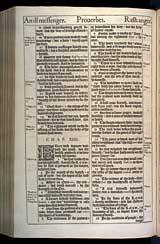