1 The Prouerbes of Solomon: A wise sonne maketh a glad father: but a foolish sonne is the heauinesse of his mother.

2 Treasures of wickednesse profit nothing: but righteousnes deliuereth from death.

3 The Lord will not suffer the soule of the righteous to famish: but he casteth away the substance of the wicked.

4 Hee becommeth poore that dealeth with a slacke hand: but the hand of the diligent, maketh rich.

5 Hee that gathereth in Summer, is a wise sonne: but hee that sleepeth in haruest, is a sonne that causeth shame.

6 Blessings are vpon the head of the iust: but violence couereth the mouth of the wicked.

7 The memorie of the iust is blessed: but the name of the wicked shall rot.

8 The wise in heart will receiue commaundements: but a prating foole shall fall.

9 He that walketh vprightly, walketh surely: but he that peruerteth his wayes, shalbe knowen.

10 Hee that winketh with the eye, causeth sorrow: but a prating foole shall fall.

11 The mouth of a righteous man is a well of life: but violence couereth the mouth of the wicked.

14 Wise men lay vp knowledge: but the mouth of the foolish is neere destruction.

15 The rich mans wealth is his strong citie: the destruction of the poore is their pouertie.

16 The labour of the righteous tendeth to life: the fruite of the wicked to sinne.

17 He is in the way of life that keepeth instruction: but hee that refuseth reproofe, erreth.

18 Hee that hideth hatred with lying lippes, and he that vttereth a slander, is a foole.

19 In the multitude of words there wanteth not sinne: but he that refraineth his lippes, is wise.

20 The tongue of the iust is as choise siluer: the heart of the wicked is little worth.

21 The lippes of the righteous feed many: but fooles die for want of wisedome.

22 The blessing of the Lord, it maketh rich, and hee addeth no sorrow with it.

23 It is as a sport to a foole to doe mischiefe: but a man of vnderstanding hath wisedome.

24 The feare of the wicked, it shall come vpon him: but the desire of the righteous shalbe granted.

25 As the whirlewinde passeth, so is the wicked no more: but the righteous is an euerlasting foundation.

26 As vineger to the teeth, and as smoke to the eyes, so is the sluggard to them that send him.

27 The feare of the Lord prolongeth dayes: but the yeeres of the wicked shalbe shortened.

28 The hope of the righteous shall bee gladnesse: but the expectation of the wicked shall perish.

29 The way of the Lord is strength to the vpright: but destruction shall bee to the workers of iniquitie.

30 The righteous shall neuer bee remooued: but the wicked shall not inhabite the earth.

31 The mouth of the iust bringeth foorth wisedome: but the froward tongue shalbe cut out.

32 The lips of the righteous know what is acceptable: but the mouth of the wicked speaketh frowardnesse.

Through the whole of the Proverbs, we are to look for somewhat beyond the first sense the passage may imply, and this we shall find to be Christ. He is the Wisdom so often spoken of in this book.1 The comfort of parents much depends on their children; and this suggests to both, motives to their duties. #2,3|. Though the righteous may be poor, the Lord will not suffer him to want what is needful for spiritual life. #4|. Those who are fervent in spirit, serving the Lord, are likely to be rich in faith, and rich in good works. #5|. Here is just blame of those who trifle away opportunities, both for here and for hereafter. #6|. Abundance of blessings shall abide on good men; real blessings. 7|. Both the just and the wicked must die; but between their souls there is a vast difference. #8|. The wise in heart puts his knowledge in practice. #9|. Dissemblers, after all their shuffling, will be exposed. #10|. Trick and artifice will be no excuse for iniquity. #11|. The good man's mouth is always open to teach, comfort, and correct others. #12|. Where there is hatred, every thing stirs up strife. By bearing with each other, peace and harmony are preserved. #13|. Those that foolishly go on in wicked ways, prepare rods for themselves. #14|. Whatever knowledge may be useful, we must lay it up, that it may not be to seek when we want it. The wise gain this wisdom by reading, by hearing the word, by meditation, by prayer, by faith in Christ, who is made of God unto us wisdom. #15|. This refers to the common mistakes both of rich and poor, as to their outward condition. Rich people's wealth exposes them to many dangers; while a poor man may live comfortably, if he is content, keeps a good conscience, and lives by faith. #16|. Perhaps a righteous man has no more than what he works hard for, but that labour tends to life. #17|. The traveller that has missed his way, and cannot bear to be told of it, and to be shown the right way, must err still. #18|. He is especially a fool who thinks to hide anything from God; and malice is no better. #19|. Those that speak much, speak much amiss. He that checks himself is a wise man, and therein consults his own peace. #20,21|. The tongue of the just is sincere, freed from the dross of guile and evil design. Pious discourse is spiritual food to the needy. Fools die for want of a heart, so the word is; for want of thought. 22|. That wealth which is truly desirable, has no vexation of spirit in the enjoyment; no grief for the loss; no guilt by the abuse of it. What comes from the love of God, has the grace of God for its companion. #23|. Only foolish and wicked men divert themselves with doing harm to others, or tempting to sin. #24|. The largest desire of eternal blessings the righteous can form, will be granted. #25|. The course of prosperous sinners is like a whirlwind, which soon spends itself, and is gone. #26|. As vinegar sets the teeth on edge, and as the smoke causes the eyes to smart, so the sluggard vexes his employer. #27,28|. What man is he that loves life? Let him fear God, and that will secure to him life enough in this world, and eternal life in the other. 29|. The believer grows stronger in faith, and obeys with increased delight. #30|. The wicked would be glad to have this earth their home for ever, but it cannot be so. They must die and leave all their idols behind. #31,32|. A good man discourses wisely for the benefit of others. But it is the sin, and will be the ruin of a wicked man, that he speaks what is displeasing to God, and provoking to those he converses with. The righteous is kept by the power of God; and nothing shall be able to separate him from the love of God which is in Christ Jesus.

View All Discussusion for Proverbs Chapter 10... 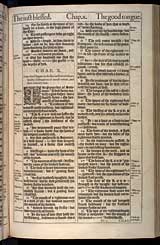