1 And the Lord spake vnto Moses in the plaines of Moab by Iordane, neere Iericho, saying,

2 Command the children of Israel, that they giue vnto the Leuites of the inheritance of their possession, cities to dwell in: and yee shall giue also vnto the Leuites suburbs for the cities round about them.

3 And the cities shall they haue to dwell in, and the suburbs of them shall be for their cattell, and for their goods, and for all their beasts.

4 And the suburbs of the cities, which yee shall giue vnto the Leuites, shall reach from the wall of the citie, and outward, a thousand cubites round about.

6 And among the cities which yee shal giue vnto the Leuites, there shalbe sixe cities for refuge, which ye shall appoint for the manslayer, that hee may flee thither: And to them ye shall adde fourty and two cities.

7 So all the cities which ye shall giue to the Leuites, shall be fourty and eight cities: them shall yee giue with their suburbs.

10 Speake vnto the children of Israel, and say vnto them, When ye bee come ouer Iordane, into the land of Canaan:

11 Then ye shall appoint you cities, to be cities of refuge for you; that the slayer may flee thither which killeth any person at vnawares.

12 And they shall be vnto you cities for refuge from the auenger, that the man-slayer die not, vntill he stand before the Congregation in iudgement.

13 And of these cities which ye shall giue, sixe cities shall ye haue for refuge.

14 Yee shall giue three cities on this side Iordane, and three cities shall yee giue in the land of Canaan, which shall be cities of refuge.

15 These sixe cities shall be a refuge, both for the children of Israel, and for the stranger, and for the soiourner among them: that euery one that killeth any person vnawares, may flee thither.

16 And if he smite him with an instrument of Iron, (so that he die,) hee is a murderer: the murderer shall surely be put to death.

17 And if he smite him with throwing a stone, (wherewith hee may die) and he die, he is a murderer: the murderer shall surely be put to death.

18 Or if he smite him with an handweapon of wood, (wherewith he may die) and he die, hee is a murderer: the murderer shall surely be put to death.

19 The reuenger of blood himselfe shall slay the murtherer: when he meeteth him, he shall slay him.

20 But if he thrust him of hatred, or hurle at him by laying of waite that he die,

21 Or in enmitie smite him with his hand, that he die: hee that smote him shall surely be put to death, for hee is a murderer: the reuenger of blood shall slay the murderer, when hee meeteth him.

22 But if hee thrust him suddenly without enmitie, or haue cast vpon him any thing without laying of wait,

23 Or with any stone wherewith a man may die, seeing him not, and cast it vpon him, that he die, and was not his enemie, neither sought his harme:

24 Then the Congregation shall iudge betweene the slayer, and the reuenger of blood, according to these iudgements.

26 But if the slayer shall at any time come without the border of the citie of his refuge, whither he was fled:

29 So these things shall be for a statute of iudgment vnto you, thorowout your generations in al your dwellings.

30 Who so killeth any person, the murderer shall be put to death, by the mouth of witnesses: but one witnesse shall not testifie against any person, to cause him to die.

31 Moreouer, yee shall take no satisfaction for the life of a murderer, which is guiltie of death, but he shalbe surely put to death.

32 And yee shall take no satisfaction for him that is fled to the citie of his refuge, that hee should come againe to dwell in the land, vntil the death of the Priest.

33 So ye shall not pollute the lande wherein ye are: for blood, it defileth the land: and the land cannot bee cleansed of the blood that is shed therein, but by the blood of him that shed it.

34 Defile not therefore the lande which yee shall inhabite, wherein I dwell: for I the Lord dwell among the children of Israel.

The cities of the Levites. (1-8) The cities of refuge, The laws about murder. (9-34)1-8 The cities of the priests and Levites were not only to accommodate them, but to place them, as religious teachers, in several parts of the land. For though the typical service of the tabernacle or temple was only in one place, the preaching of the word of God, and prayer and praise, were not thus confined. These cities were to be given out of each tribe. Each thus made a grateful acknowledgement to God. Each tribe had the benefit of the Levites dwelling amongst them, to teach them the knowledge of the Lord; thus no parts of the country were left to sit in darkness. The gospel provides that he who is taught in the word, should communicate to him that teaches, in all good things, #Ga 6:6|. We are to free God's ministers from distracting cares, and to leave them at leisure for the duties of their station; so that they may be wholly employed therein, and avail themselves of every opportunity, by acts of kindness, to gain the good-will of the people, and to draw their attention.

9-34 To show plainly the abhorrence of murder, and to provide the more effectually for the punishment of the murderer, the nearest relation of the deceased, under the title of avenger of blood, (or the redeemer of blood,) in notorious cases, might pursue, and execute vengeance. A distinction is made, not between sudden anger and malice aforethought, both which are the crime of murder; but between intentionally striking a man with any weapon likely to cause death, and an unintentional blow. In the latter case alone, the city of refuge afforded protection. Murder in all its forms, and under all disguises, pollutes a land. Alas! that so many murders, under the name of duels, prize-fights, &c. should pass unpunished. There were six cities of refuge; one or other might be reached in less than a day's journey from any part of the land. To these, man-slayers might flee for refuge, and be safe, till they had a fair trial. If acquitted from the charge, they were protected from the avenger of blood; yet they must continue within the bounds of the city till the death of the high priest. Thus we are reminded that the death of the great High Priest is the only means whereby sins are pardoned, and sinners set at liberty. These cities are plainly alluded to, both in the Old and New Testament, we cannot doubt the typical character of their appointment. Turn ye to the strong hold, ye prisoners of hope, saith the voice of mercy, #Zec 9:12|, alluding to the city of refuge. St. Paul describes the strong consolation of fleeing for refuge to the hope set before us, in a passage always applied to the gracious appointment of the cities of refuge, #Heb 6:18|. The rich mercies of salvation, through Christ, prefigured by these cities, demand our regard. 1. Did the ancient city rear its towers of safety on high? See Christ raised up on the cross; and is he not exalted at the right hand of his Father, to be a Prince and a Saviour, to give repentance and remission of sins? 2. Does not the highway of salvation, resemble the smooth and plain path to the city of refuge? Survey the path that leads to the Redeemer. Is there any stumbling-block to be found therein, except that which an evil heart of unbelief supplies for its own fall? 3. Waymarks were set up pointing to the city. And is it not the office of the ministers of the gospel to direct sinners to Him? 4. The gate of the city stood open night and day. Has not Christ declared, Him that cometh unto me I will in nowise cast out? 5. The city of refuge afforded support to every one who entered its walls. Those who have reached the refuge, may live by faith on Him whose flesh is meat indeed, and whose blood is drink indeed. 6. The city was a refuge for all. In the gospel there is no respect of persons. That soul lives not which deserves not Divine wrath; that soul lives not which may not in simple faith hope for salvation and life eternal, through the Son of God.

View All Discussusion for Numbers Chapter 35... 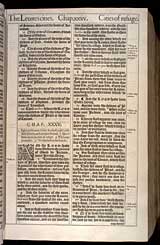