1 And when king Arad the Canaanite, which dwelt in the South, heard tell that Israel came by the way of the spies, then hee fought against Israel, and tooke some of them prisoners.

2 And Israel vowed a vow vnto the Lord, and said, If thou wilt in deed deliuer this people into my hand, then I wil vtterly destroy their cities.

3 And the Lord hearkened to the voyce of Israel, and deliuered vp the Canaanites: and they vtterly destroyed them, and their cities, and hee called the name of the place Hormah.

4 ¶ And they iourneyed from mount Hor, by the way of the red sea, to compasse the land of Edom: and the soule of the people was much discouraged because of the way.

5 And the people spake against God and against Moses, Wherefore haue ye brought vs vp out of Egypt, to die in the wildernesse? for there is no bread, neither is there any water, and our soule loatheth this light bread.

7 ¶ Therefore the people came to Moses, and said, We haue sinned: for wee haue spoken against the Lord, and against thee: pray vnto the Lord that hee take away the serpents from vs: and Moses prayed for the people.

8 And the Lord said vnto Moses, Make thee a fierie serpent, and set it vpon a pole: and it shall come to passe, that euery one that is bitten, when hee looketh vpon it, shall liue.

10 ¶ And the children of Israel set forward, and pitched in Oboth.

11 And they iourneyed from Oboth, and pitched at Iie-Abarim, in the wildernes which is before Moab, toward the Sunne rising.

12 ¶ From thence they remooued, and pitched in the valley of Zared.

13 From thence they remooued, and pitched on the other side of Arnon, which is in the wildernesse that commeth out of the coasts of the Amorites: for Arnon is the border of Moab, betweene Moab and the Amorites.

14 Wherefore it is said in the booke of the warres of the Lord, what he did in the Red sea, and in the brookes of Arnon,

15 And at the streame of the brookes that goeth downe to the dwelling of Ar, & lieth vpon the border of Moab.

16 And from thence they went to Beer: that is the well whereof the Lord spake vnto Moses, Gather the people together, and I will giue them water.

18 The Princes digged the well, the nobles of the people digged it, by the direction of the Law-giuer, with their staues. And from the wildernesse they went to Mattanah:

19 And from Mattanah, to Nahaliel, and from Nahaliel to Bamoth:

20 And from Bamoth in the valley, that is in the countrey of Moab, to the toppe of Pisgah, which looketh toward Ieshimon.

22 Let me passe thorow thy land, we will not turne into the fields, or into the vineyards, we will not drinke of the waters of the well: but we will goe along by the kings high way, vntill wee be past thy borders.

23 And Sihon would not suffer Israel to passe thorow his border: but Sihon gathered all his people together, and went out against Israel into the wildernes: and he came to Iahaz, and fought against Israel.

25 And Israel tooke all these cities: and Israel dwelt in all the cities of the Amorites, in Heshbon, and in all the villages thereof.

26 For Heshbon was the citie of Sihon the King of the Amorites, who had fought against the former King of Moab, and taken all his land out of his hand, euen vnto Arnon.

27 Wherefore they that speake in prouerbes, say, Come into Heshbon: let the citie of Sihon bee built and prepared.

28 For there is a fire gone out of Heshbon, a flame from the citie of Sihon: it hath consumed Ar of Moab, and the lordes of the high places of Arnon.

29 Woe to thee, Moab, thou art vndone, O people of Chemosh: he hath giuen his sonnes that escaped, and his daughters, into captiuitie vnto Sihon King of the Amorites.

30 We haue shot at them; Heshbon is perished euen vnto Dibon, and we haue layde them waste euen vnto Nophah, which reacheth vnto Medeba.

31 ¶ Thus Israel dwelt in the land of the Amorites.

32 And Moses sent to spy out Iaazer, and they tooke the villages thereof, and droue out the Amorites that were there.

33 ¶ And they turned and went vp by the way of Bashan: and Og the King of Bashan went out against them, he, and all his people, to the battell at Edrei.

34 And the Lord said vnto Moses, Feare him not: for I haue deliuered him into thy hand, and all his people, and his land, and thou shalt doe to him as thou didst vnto Sihon King of the Amorites, which dwelt at Heshbon.

35 So they smote him & his sonnes, and all his people, vntill there was none left him aliue, and they possessed his land.

The Canaanites of Arad destroyed. (1-3) The people murmuring, are plagued with fiery serpents, They repenting, are healed through the brazen serpent. (4-9) Further journeys of the Israelites. (10-20) Sihon and Og overcome, Their land possessed. (21-35)1-3 Before the people began their march round the country of Edom, the king of Arad, a Canaanite, who inhabited the southern part of the country, attacked them in the wilderness, and took some prisoners. This was to lead the Israelites to look more thoroughly to the Lord.

4-9 The children of Israel were wearied by a long march round the land of Edom. They speak discontentedly of what God had done for them, and distrustfully of what he would do. What will they be pleased with, whom manna will not please? Let not the contempt which some cast on the word of God, make us value it less. It is the bread of life, substantial bread, and will nourish those who by faith feed upon it, to eternal life, whoever may call it light bread. We see the righteous judgment God brought upon them for murmuring. He sent fiery serpents among them, which bit or stung many to death. It is to be feared that they would not have owned the sin, if they had not felt the smart; but they relent under the rod. And God made a wonderful provision for their relief. The Jews themselves say it was not the sight of the brazen serpent that cured; but in looking up to it, they looked up to God as the Lord that healed them. There was much gospel in this. Our Saviour declared, #Joh 3:14,15|, that as Moses lifted up the serpent in the wilderness, so the Son of man must be lifted up, that whatsoever believeth in him, should not perish. Compare their disease and ours. Sin bites like a serpent, and stings like an adder. Compare the application of their remedy and ours. They looked and lived, and we, if we believe, shall not perish. It is by faith that we look unto Jesus, #Heb 12:2|. Whosoever looked, however desperate his case, or feeble his sight, or distant his place, was certainly and perfectly cured. The Lord can relieve us from dangers and distresses, by means which human reason never would have devised. Oh that the venom of the old serpent, inflaming men's passions, and causing them to commit sins which end in their eternal destruction, were as sensibly felt, and the danger as plainly seen, as the Israelites felt pain from the bite of the fiery serpents, and feared the death which followed! Then none would shut their eyes to Christ, or turn from his gospel. Then a crucified Saviour would be so valued, that all things else would be accounted loss for him; then, without delay, and with earnestness and simplicity, all would apply to him in the appointed way, crying, Lord, save us; we perish! Nor would any abuse the freeness of Christ's salvation, while they reckoned the price which it cost him.

10-20 We have here the removes of the children of Israel, till they came to the plains of Moab, from whence they passed over Jordan into Canaan. The end of their pilgrimage was near. "They set forward." It were well if we did thus; and the nearer we come to heaven, were so much the more active and abundant in the work of the Lord. The wonderful success God granted to his people, is here spoken of, and, among the rest, their actions on the river Arnon, at Vaheb in Suphah, and other places on that river. In every stage of our lives, nay, in every step, we should notice what God has wrought for us; what he did at such a time, and what in such a place, ought to be distinctly remembered. God blessed his people with a supply of water. When we come to heaven, we shall remove to the well of life, the fountain of living waters. They received it with joy and thankfulness, which made the mercy doubly sweet. With joy must we draw water out of the wells of salvation, #Isa 12:3|. As the brazen serpent was a figure of Christ, who is lifted up for our cure, so is this well a figure of the Spirit, who is poured forth for our comfort, and from whom flow to us rivers of living waters, #Joh 7:38,39|. Does this well spring up in our souls? If so, we should take the comfort to ourselves, and give the glory to God. God promised to give water, but they must open the ground. God's favours must be expected in the use of such means as are within our power, but still the power is only of God.

21-35 Sihon went with his forces against Israel, out of his own borders, without provocation, and so ran upon his own ruin. The enemies of God's church often perish by the counsels they think most wisely taken. Og, king of Bashan, instead of being warned by the fate of his neighbours, to make peace with Israel, makes war with them, which proves in like manner his destruction. Wicked men do their utmost to secure themselves and their possessions against the judgments of God; but all in vain, when the day comes on which they must fall. God gave Israel success, while Moses was with them, that he might see the beginning of the glorious work, though he must not live to see it finished. This was, in comparison, but as the day of small things, yet it was an earnest of great things. We must prepare for fresh conflicts and enemies. We must make no peace or truce with the powers of darkness, nor even treat with them; nor should we expect any pause in our contest. But, trusting in God, and obeying his commands, we shall be more than conquerors over every enemy.

View All Discussusion for Numbers Chapter 21... 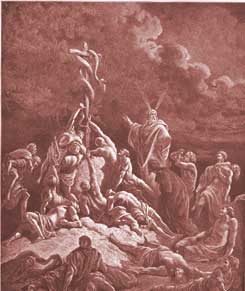 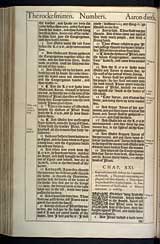