2 Send thou men, that they may search the lande of Canaan, which I giue vnto the children of Israel: of euery tribe of their fathers shal ye send a man, euery one a ruler among them.

3 And Moses by the commaundement of the Lord, sent them from the wildernes of Paran: all those men were heads of the children of Israel.

4 And these were their names. Of the tribe of Reuben, Shammua the sonne of Zaccur.

5 Of the tribe of Simeon, Shaphat the sonne of Hori.

6 Of the tribe of Iudah, Caleb the sonne of Iephunneh.

7 Of the tribe of Issachar, Igal the sonne of Ioseph.

8 Of the tribe of Ephraim, Oshea the sonne of Nun.

9 Of the tribe of Beniamin, Palti the sonne of Raphu.

10 Of the tribe of Zebulun, Gaddiel the sonne of Sodi.

12 Of the tribe of Dan, Ammiel the sonne of Gemalli.

13 Of the tribe of Asher, Sethur the sonne of Michael.

14 Of the tribe of Naphtali, Nahbi the sonne of Uophsi.

15 Of the tribe of Gad, Geuel the sonne of Machi.

16 These are the names of the men which Moses sent to spie out the land: and Moses called Oshea the sonne of Nun, Iehoshua.

17 ¶ And Moses sent them to spie out the land of Canaan, and said vnto them, Get you by this way Southward, and goe vp into the mountaine:

18 And see the lande what it is, and the people that dwelleth therein, whether they bee strong or weake, fewe or many:

20 And what the land is, whether it be fat or leane, whether there be wood therein, or not. And be ye of good courage, and bring of the fruit of the land: (Now the time was the time of the first ripe grapes)

21 ¶ So they went vp, and searched the land, from the wildernesse of Zin, vnto Rehob, as men come to Hamath.

22 And they ascended by the South, and came vnto Hebron: where Ahiman, Sheshai, and Talmai, the children of Anak were: Now Hebron was built seuen yeeres before Zoan in Egypt.

23 And they came vnto the brooke of Eshcol, and cut downe from thence a branch with one cluster of grapes, and they bare it betweene two vpon a staffe, and they brought of the pomegranates and of the figs.

24 The place was called the brooke Eshcol, because of the cluster of grapes which the children of Israel cut downe from thence.

25 And they returned from searching of the land after fourty dayes.

27 And they told him, and said, We came vnto the land whither thou sentest vs, & surely it floweth with milke and honie; and this is the fruit of it.

28 Neuerthelesse, the people bee strong that dwell in the land, and the cities are walled and very great: and moreouer, we saw the children of Anak there.

30 And Caleb stilled the people before Moses, and said, Let vs goe vp at once, and possesse it, for we are well able to ouercome it.

31 But the men that went vp with him, said, Wee be not able to goe vp against the people, for they are stronger then we.

32 And they brought vp an euill report of the land which they had searched, vnto the children of Israel, saying, The land through which we haue gone, to search it, is a land that eateth vp the inhabitants thereof, and all the people that we saw in it, are men of a great stature.

33 And there we saw the giants, the sonnes of Anak, which come of the giants: and wee were in our owne sight as grashoppers, and so wee were in their sight.

Twelve men sent to search the land of Canaan, Their instructions. (1-20) Their proceedings. (21-25) Their account of the land. (26-33)1-20 A memorable and melancholy history is related in this and the following chapter, of the turning back of Israel from the borders of Canaan, and the sentencing them to wander and perish in the wilderness, for their unbelief and murmuring. It appears, #De 1:22|, that the motion to search out the land came from the people. They had a better opinion of their own policy than of God's wisdom. Thus we ruin ourselves by believing the reports and representations of sense rather than Divine revelation. We walk by sight not by faith. Moses gave the spies this charge, Be of good courage. It was not only a great undertaking they were put upon, which required good management and resolution; but a great trust was reposed in them, which required that they should be faithful. Courage in such circumstances can only spring from strong faith, which Caleb and Joshua alone possessed.

21-25 The searchers of the land brought a bunch of grapes with them, and other fruits, as proofs of the goodness of the country; which was to Israel both the earnest and the specimen of all the fruits of Canaan. Such are the present comforts we have in communion with God, foretastes of the fulness of joy we expect in the heavenly Canaan. We may see by them what heaven is.

26-33 We may wonder that the people of Israel staid forty days for the return of their spies, when they were ready to enter Canaan, under all the assurances of success they could have from the Divine power, and the miracles that had hitherto attended them. But they distrusted God's power and promise. How much we stand in our own light by our unbelief! At length the messengers returned; but the greater part discouraged the people from going forward to Canaan. Justly are the Israelites left to this temptation, for putting confidence in the judgment of men, when they had the word of God to trust in. Though they had found the land as good as God had said, yet they would not believe it to be as sure as he had said, but despaired of having it, though Eternal Truth had engaged it to them. This was the representation of the evil spies. Caleb, however, encouraged them to go forward, though seconded by Joshua only. He does not say, Let us go up and conquer it; but, Let us go and possess it. Difficulties that are in the way of salvation, dwindle and vanish before a lively, active faith in the power and promise of God. All things are possible, if they are promised, to him that believes; but carnal sense and carnal professors are not to be trusted. Unbelief overlooks the promises and power of God, magnifies every danger and difficulty, and fills the heart with discouragement. May the Lord help us to believe! we shall then find all things possible.

View All Discussusion for Numbers Chapter 13... 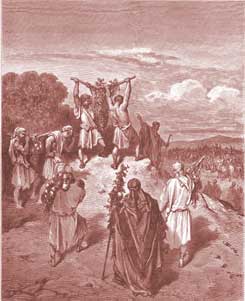 The Spies Return from the Promised Land 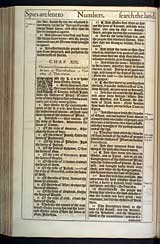