1 And Miriam and Aaron spake against Moses, because of the Ethiophian woman, whom hee had married: for he had married an Ethiopian woman.

2 And they said, Hath the Lord indeed spoken onely by Moses? Hath hee not spoken also by vs? And the Lord heard it.

3 (Now the man Moses was very meeke, aboue all the men which were vpon the face of the earth.)

4 And the Lord spake suddenly vnto Moses, and vnto Aaron, and vnto Miriam, Come out ye three vnto the Tabernacle of the Congregation: and they three came out.

5 And the Lord came downe in the pillar of the cloude, and stood in the doore of the Tabernacle, and called Aaron and Miriam: and they both came foorth.

6 And hee saide, Heare now my words: If there be a Prophet among you, I the Lord will make my selfe knowen vnto him in a vision, and will speake vnto him in a dreame:

7 My seruant Moses is not so, who is faithfull in all mine house.

8 With him will I speake mouth to mouth euen apparantly, and not in darke speeches, and the similitude of the Lord shall hee behold: wherefore then were yee not afraid to speake against my seruant Moses?

9 And the anger of the Lord was kindled against them, and he departed.

10 And the cloud departed from off the Tabernacle, and behold, Miriam became leprous, white as snow: and Aaron looked vpon Miriam, and behold, she was leprous.

12 Let her not bee as one dead, of whom the flesh is halfe consumed, when he commeth out of his mothers wombe.

14 ¶ And the Lord said vnto Moses, If her father had but spit in her face, should she not bee ashamed seuen dayes? let her be shut out from the campe seuen dayes, and after that let her be receiued in againe.

15 And Miriam was shut out from the campe seuen dayes: and the people iourneied not, til Miriam was brought in againe.

16 And afterward the people remoued from Hazeroth, and pitched in the wildernesse of Paran.

God rebukes the murmuring of Aaron and Miriam. (1-9) Miriam struck with leprosy, and healed at the prayer of Moses. (10-16)1-9 The patience of Moses was tried in his own family, as well as by the people. The pretence was, that he had married a foreign wife; but probably their pride was hurt, and their envy stirred up, by his superior authority. Opposition from our near relations, and from religious friends, is most painful. But this is to be looked for, and it will be well if in such circumstances we can preserve the gentleness and meekness of Moses. Moses was thus fitted to the work he was called to. God not only cleared Moses, but praised him. Moses had the spirit of prophecy in a way which set him far above all other prophets; yet he that is least in the kingdom of heaven, is greater than he; and our Lord Jesus infinitely excels him, #Heb 3:1|. Let Miriam and Aaron consider whom it was they insulted. We have reason to be afraid of saying or doing any thing against the servants of God. And those are presumptuous indeed who are not afraid to speak evil of dignities, #2Pe 2:10|. The removal of God's presence is the surest and saddest token of God's displeasure. Woe to us, if he depart! he never departs, till by sin and folly we drive him from us.

10-16 The cloud departed, and Miriam became leprous. When God goes, evil comes: expect no good when God departs. Her foul tongue, as Bishop Hall says, was justly punished with a foul face. Aaron, as priest, was judge of the leprosy. He could not pronounce her leprous without trembling, knowing himself to be equally guilty. But if she was thus punished for speaking against Moses, what will become of those who sin against Christ? Aaron, who joined his sister in speaking against Moses, is forced for himself and his sister, to beseech him, and to speak highly of him whom he had so lately blamed. Those who trample upon the saints and servants of God, will one day be glad to make court to them. It is well when rebukes produce confession of sin and repentance. Such offenders, though corrected and disgraced, shall be pardoned. Moses made it appear, that he forgave the injury done him. To this pattern of Moses, and that of our Saviour, who said, "Father, forgive them," we must conform. A reason is given for Miriam's being put out of the camp for seven days; because thus she ought to accept the punishment of her sin. When under the tokens of God's displeasure for sin, it becomes us to take shame to ourselves. This hindered the people's progress in their march forward towards Canaan. Many things oppose us, but nothing so hinders us in the way to heaven, as sin.

View All Discussusion for Numbers Chapter 12... 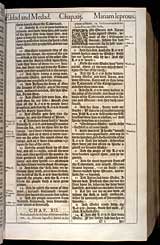