2 Make thee two trumpets of siluer: of an whole piece shalt thou make them, that thou mayest vse them for the calling of the assembly, and for the iourneying of the campes.

3 And when they shall blow with them, all the assembly shall assemble themselues to thee, at the doore of the Tabernacle of the Congregation.

4 And if they blow but with one trumpet, then the Princes, which are heads of the thousands of Israel, shall gather themselues vnto thee.

5 When ye blow an alarme, then the campes that lie on the East parts, shall goe forward.

7 But when the Congregation is to be gathered together, you shal blow: but you shall not sound an alarme.

8 And the sonnes of Aaron the Priests shall blow with the trumpets; and they shalbe to you for an ordinance for euer throughout your generations.

9 And if ye goe to warre in your land, against the enemie that oppresseth you, then ye shall blow an alarme with the trumpets, and ye shalbe remembred before the Lord your God, and yee shalbe saued from your enemies.

10 Also in the day of your gladnesse, and in your solemne dayes, and in the beginnings of your monethes, ye shall blow with the trumpets ouer your burnt offerings, and ouer the sacrifices of your peace offerings, that they may bee to you for a memoriall before your God: I am the Lord your God.

11 ¶ And it came to passe on the twentieth day of the second moneth, in the second yeere, that the cloude was taken vp from off the Tabernacle of the Testimony.

13 And they first tooke their iourney, according to the commandement of the Lord, by the hand of Moses.

14 ¶ In the first place went the standerd of the campe of the children of Iudah, according to their armies, and ouer his hoste was Nahshon the sonne of Amminadab.

15 And ouer the hoste of the tribe of the children of Issachar, was Nethaneel the sonne of Zuar.

16 And ouer the hoste of the tribe of the children of Zebulun, was Eliab the sonne of Helon.

18 ¶ And the standerd of the campe of Reuben set forward according to their armies: and ouer his hoste was Elizur the sonne of Shedeur.

19 And ouer the hoste of the tribe of the children of Simeon, was Shelumiel the sonne of Zurishaddai.

20 And ouer the hoste of the tribe of the children of Gad, was Eliasaph the sonne of Deuel.

21 And the Kohathites set forward, bearing the Sanctuary, and the other did set vp the Tabernacle against they came.

22 ¶ And the standerd of the campe of the children of Ephraim set forward, according to their armies, and ouer his hoste was Elishama the sonne of Ammiud.

23 And ouer the hoste of the tribe of the children of Manasseh was Gamaliel the sonne of Pedazur.

24 And ouer the hoste of the tribe of the children of Beniamin, was Abidan the soune of Gideoni.

25 ¶ And the standerd of the campe of the children of Dan set forward, which was the rere-ward of all the campes throughout their hostes: and ouer his hoste was Ahiezer the sonne of Ammishaddai.

26 And ouer the hoste of the tribe of the children of Asher, was Pagiel the sonne of Ocran.

27 And ouer the hoste of the tribe of the children of Naphtali was Ahira the sonne of Enan.

28 Thus were the iourneyings of the children of Israel, according to their armies, when they set forward.

29 ¶ And Moses said vnto Hobab the sonne of Raguel the Midianite Moses father in law, Wee are iourneying vnto the place of which the Lord said, I wil giue it you: come thou with vs, and we will doe thee good: for the Lord hath spoken good concerning Israel.

30 And he said vnto him, I will not goe, but I will depart to mine owne land, and to my kinred.

31 And he said, Leaue vs not, I pray thee, forasmuch as thou knowest how we are to encampe in the wilderuesse, and thou mayest bee to vs in stead of eyes.

32 And it shall bee if thou goe with vs, yea it shall be, that what goodnesse the Lord shall doe vnto vs, the same will we doe vnto thee.

34 And the cloude of the Lord was vpon them by day, when they went out of the campe.

35 And it came to passe when the Arke set forward, that Moses said, Rise vp Lord, and let thine enemies be scattered, and let them that hate thee, flee before thee.

36 And when it rested, he said, Returne, O Lord, vnto the many thousands of Israel.

The silver trumpets. (1-10) The Israelites remove from Sinai to Paran. (11-28) Hobab entreated by Moses to continue. (29-32) The blessing pronounced by Moses. (33-36)1-10 Here are directions concerning the public notices to be given the people by sound of trumpet. Their laws in every case were to be Divine, therefore, even in this matter Moses is directed. These trumpets typify the preached gospel. It sounds an alarm to sinners, calls them to repent, proclaims liberty to the captives and slaves of Satan, and collects the worshippers of God. It directs and encourages their heavenly journey; stirs them up to combat against the world and sin, encouraging them with the assurance of victory. It leads their attention to the sacrifice of Christ, and shows the Lord's presence for their protection. It is also necessary that the gospel trumpet give a distinct sound, according to the persons addressed, or the end proposed; whether to convince, humble, console, exhort, reprove, or teach. The sounding of the trumpet of the gospel is God's ordinance, and demands the attention of all to whom it is sent.

11-28 After the Israelites had continued nearly a year at mount Sinai, and all was settled respecting their future worship, they began their march to Canaan. True religion begins with the knowledge of the holy law of God, and humiliation for sin, but we must go on towards perfection, in acquaintance with Christ and his gospel, and those effectual encouragements, motives, and assistances to holiness, which it proposes. They took their journey according to the commandment of the Lord, #De 1:6-8|, and as the cloud led them. Those who give themselves to the direction of God's word and Spirit, steer a steady course, even when they seem bewildered. While they are sure they cannot lose their God and Guide, they need not fear losing their way. They went out of the wilderness of Sinai, and rested in the wilderness of Paran. All our removes in this world are but from one wilderness to another. The changes we think will be for the better do not always prove so. We shall never be at rest, never at home, till we come to heaven, but all will be well there.

29-32 Moses invites his kindred to go to Canaan. Those that are bound for the heavenly Canaan, should ask and encourage their friends to go with them: we shall have none the less of the joys of heaven, for others coming to share with us. It is good having fellowship with those who have fellowship with God. But the things of this world, which are seen, draw strongly from the pursuit of the things of the other world, which are not seen. Moses urges that Hobab might be serviceable to them. Not to show where they must encamp, nor what way they must march, the cloud was to direct that; but to show the conveniences of the place they marched through, and encamped in. It well consists with our trust in God's providence, to use the help of our friends.

33-36 Their going out and coming in, gives an example to us to begin and end every day's journey and every day's work with prayer. Here is Moses's prayer when the ark set forward, "Rise up, and let thine enemies be scattered." There are those in the world who are enemies to God and haters of him; secret and open enemies; enemies to his truths, his laws, his ordinances, his people. But for the scattering and defeating of God's enemies, there needs no more than God's arising. Observe also the prayer of Moses when the ark rested, that God would cause his people to rest. The welfare and happiness of the Israel of God, consist in the continual presence of God among them. Their safety is not in their numbers, but in the favour of God, and his gracious return to them, and resting with them. Upon this account, Happy art thou, O Israel! who is like unto thee, O people! God will go before them, to find them resting-places by the way. His promise is, and their prayers are, that he will never leave them nor forsake them.

View All Discussusion for Numbers Chapter 10... 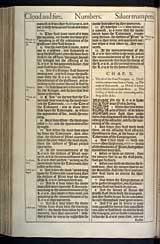