1 And all the people gathered themselues together, as one man, into the street that was before the water gate, and they spake vnto Ezra the scribe, to bring the booke of the Law of Moses, which the Lord had commanded to Israel.

2 And Ezra the priest brought the Law before the Congregation, both of men and women, and all that could heare with vnderstanding, vpon the first day of the seuenth moneth.

3 And hee read therein before the street that was before the water gate, from the morning vntill midday, before the men and the women, and those that could vnderstand: And the eares of all the people were attentiue vnto the booke of the law.

4 And Ezra the scribe, stood vpon a pulpit of wood, which they had made for the purpose, and beside him stood Mattithiah, and Shema, and Anaiah, and Urijah, and Hilkiah, and Maaseiah, on his right hand: and on his left hand, Pedaiah, and Mishael, and Malchiah, and Hashum, and Hashbadana, Zechariah, and Meshullam.

6 And Ezra blessed the Lord the great God: and al the people answered, Amen, Amen, with lifting vp their hands: and they bowed their heads, and worshipped the Lord, with their faces to the ground.

7 Also Ieshua and Bani, and Sherebiah, Iamin, Akkub, Shabbethai, Hodijah, Maaseiah, Kelita, Azariah, Iozabad, Hanan, Pelaiah, and the Leuites, caused the people to vnderstand the law: and the people stood in their place.

8 So they read in the booke, in the Law of God distinctly, and gaue the sense, and caused them to vnderstand the reading.

9 ¶ And Nehemiah, which is the Tirshatha, and Ezra the Priest the Scribe, and the Leuites that taught the people, said vnto all the people, This day is holy vnto the Lord your God, mourne not, nor weepe: for all the people wept, when they heard the words of the Law.

10 Then hee sayd vnto them, Goe your way, eat the fat, & drinke the sweet, and send portions vnto them, for whom nothing is prepared: for this day is holy vnto our Lord: neither be ye sory, for the ioy of the Lord is your strength.

11 So the Leuites stilled all the people, saying, Holde your peace, for the day is holy, neither be ye grieued.

12 And all the people went their way to eate, and to drinke, and to send portions, and to make great mirth, because they had vnderstood the wordes that were declared vnto them.

13 ¶ And on the second day were gathered together the chiefe of the fathers of all the people, the Priestes and the Leuites, vnto Ezra the Scribe, euen to vnderstand the wordes of the Law.

14 And they found written in the Law whith the Lord had commanded by Moses, that the children of Israel should dwell in boothes, in the feast of the seuenth moneth:

17 And all the congregation of them that were come againe out of the captiuitie, made boothes, and sate vnder the boothes: for since the dayes of Ieshua the sonne of Nun, vnto that day, had not the children of Israel done so: and there was very great gladnesse.

18 Also day by day from the first day vnto the last day, he read in the booke of the Law of God: and they kept the feast seuen dayes, and on the eight day was a solemne assembly according vnto the maner.

The reading and expounding the law. (1-8) The people called upon to be joyful. (9-12) The feast of tabernacles, The joy of the people. (13-18)1-8 Sacrifices were to be offered only at the door of the temple; but praying and preaching were, and are, services of religion, as acceptably performed in one place as in another. Masters of families should bring their families with them to the public worship of God. Women and children have souls to save, and are therefore to acquaint themselves with the word of God, and to attend on the means of grace. Little ones, as they come to reason, must be trained up in religion. Ministers when they go to the pulpit, should take their Bibles with them; Ezra did so. Thence they must fetch their knowledge; according to that rule they must speak, and must show that they do so. Reading the Scriptures in religious assemblies is an ordinance of God, whereby he is honoured, and his church edified. Those who hear the word, should understand it, else it is to them but an empty sound of words. It is therefore required of teachers that they explain the word, and give the sense of it. Reading is good, and preaching is good, but expounding makes reading the better understood, and preaching the more convincing. It has pleased God in almost every age of the church to raise up, not only those who have preached the gospel, but also those who have given their views of Divine truth in writing; and though many who have attempted to explain Scripture, have darkened counsel by words without knowledge, yet the labours of others are of excellent use. All that we hear must, however, be brought to the test of Scripture. They heard readily, and minded every word. The word of God demands attention. If through carelessness we let much slip in hearing, there is danger that through forgetfulness we shall let all slip after hearing.

9-12 It was a good sign that their hearts were tender, when they heard the words of the law. The people were to send portions to those for whom nothing was prepared. It is the duty of a religious feast, as well as of a religious fast, to draw out the soul to the hungry; God's bounty should make us bountiful. We must not only give to those that offer themselves, but send to those out of sight. Their strength consisted in joy in the Lord. The better we understand God's word, the more comfort we find in it; the darkness of trouble arises from the darkness of ignorance.

13-18 They found written in the law about the feast of tabernacles. Those who diligently search the Scriptures, find things written there which they have forgotten. This feast of tabernacles was a representation of the believer's tabernacle state in this world, and a type of the holy joy of the gospel church. The conversion of the nations to the faith of Christ, is foretold under the figure of this feast, #Zec 14:16|. True religion will render us strangers and pilgrims upon earth. We read and hear the word acceptably and profitably, when we do according to what is written therein; when what appears to be our duty is revived, after it has been neglected. They minded the substance; else the ceremony had been of no use. They did it, rejoicing in God and his goodness. These are the means which the Spirit of God crowns with success, in bringing the hearts of sinners to tremble and to become humbled before God. But those are enemies to their own growth in holiness, who always indulge sorrow, even for sin, and put away from them the consolations tendered by the word and Spirit of God.

View All Discussusion for Nehemiah Chapter 8... 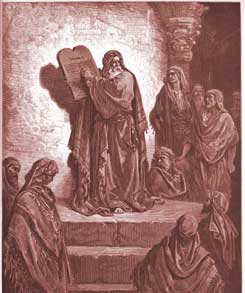 Ezra Reads the Law to the People 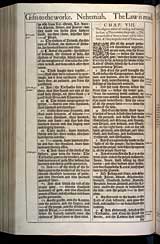