1 But it came to passe, that when Sanballat heard, that we builded the wall, he was wroth, and tooke great indignation, and mocked the Iewes.

2 And he spake before his brethren, and the army of Samaria, and said, What doe these feeble Iewes? wil they fortifie themselues? will they sacrifice? wil they make an end in a day? wil they reuiue the stones, out of the heapes of the rubbish, which are burnt?

3 Now Tobiah the Ammonite was by him, and he said, Euen that which they build, if a foxe goe vp, he shall euen breake downe their stone wall.

4 Heare, O our God, for we are despised: and turne their reproch vpon their owne head, and giue them for a pray, in the land of captiuitie.

5 And couer not their iniquitie, and let not their sinne bee blotted out from before thee: for they haue prouoked thee to anger before the builders.

6 So built we the wall, and all the wall was ioyned together vnto the halfe therof: for the people had a minde to worke.

7 ¶ But it came to passe that when Sanballat and Tobiah, and the Arabians, and the Ammonites, and the Ashdodites, heard that the walles of Ierusalem were made vp, and that the breaches began to bee stopped, then they were very wroth,

8 And conspired all of them together, to come and to fight against Ierusalem, and to hinder it.

9 Neuertheles, we made our prayer vnto our God, and set a watch against them, day and night, because of them.

10 And Iudah said, The strength of the bearers of burdens is decayed, and there is much rubbish, so that we are not able to build the wall.

11 And our aduersaries said, They shall not know, neither see, till wee come in the midst among them, and slay them, and cause the worke to cease.

12 And it came to passe that when the Iewes which dwelt by them, came, they said vnto vs ten time, From all places, whence yee shall returne vnto vs, they will be vpon you.

13 ¶ Therefore set I in the lower places behind the wall, and on the higher places, I euen set the people, after their families, with their swords, their speares, and their bowes.

14 And I looked, and rose vp, and said vnto the Nobles, and to the rulers, and to rest of the people, Bee not ye afraid of them: Remember the Lord which is great and terrible, and fight for your brethren, your sonnes and your daughters, your wiues & your houses.

15 And it came to passe when our enemies heard that it was knowen vnto vs, and God had brought their counsell to nought, that we returned all of vs to the wall, euery one vnto his worke.

16 And it came to passe from that time forth, that the halfe of my seruants wrought in the worke, and the other halfe of them held both the speares, the shields and the bowes, and the habergeons, and the rulers were behind all the house of Iudah.

17 They which builded on the wall, and they that bare burdens, with those that laded, euery one with one of his hands wrought in the worke, and with the other hand held a weapon.

18 For the builders, euery one had his sword girded by his side, and so builded: and he that sounded the trumpet was by mee.

19 ¶ And I said vnto the Nobles, and to the rulers, and to the rest of the people, The worke is great and large, and wee are separated vpon the wall, one farre from another:

20 In what place therefore ye heare the sound of the trumpet, resort ye thither vnto vs: our God shal fight for vs.

21 So wee laboured in the worke: and halfe of them held the speares, from the rising of the morning, til the starres appeared.

22 Likewise at the same time said I vnto the people, Let euery one, with his seruant, lodge within Ierusalem, that in the night they may be a guard to vs, and labour on the day.

23 So neither I, nor my brethren, nor my seruants, nor the men of the guard which followed me, none of vs put off our clothes, sauing that euery one put them off for washing.

Opposition of Sanballat and others. (1-6) The designs of the adversaries. (7-15) Nehemiah's precautions. (16-23)1-6 Many a good work has been looked upon with contempt by proud and haughty scorners. Those who disagree in almost every thing, will unite in persecution. Nehemiah did not answer these fools according to their folly, but looked up to God by prayer. God's people have often been a despised people, but he hears all the slights that are put upon them, and it is their comfort that he does so. Nehemiah had reason to think that the hearts of those sinners were desperately hardened, else he would not have prayed that their sins might never be blotted out. Good work goes on well, when people have a mind to it. The reproaches of enemies should quicken us to our duty, not drive us from it.

7-15 The hindering good work is what bad men aim at, and promise themselves success in; but good work is God's work, and it shall prosper. God has many ways of bringing to light, and so of bringing to nought, the devices and designs of his church's enemies. If our enemies cannot frighten us from duty, or deceive us into sin, they cannot hurt us. Nehemiah put himself and his cause under the Divine protection. It was the way of this good man, and should be our way. All his cares, all his griefs, all his fears, he spread before God. Before he used any means, he made his prayer to God. Having prayed, he set a watch against the enemy. If we think to secure ourselves by prayer, without watchfulness, we are slothful, and tempt God; if by watchfulness, without prayer, we are proud, and slight God: either way, we forfeit his protection. God's care of our safety, should engage and encourage us to go on with vigour in our duty. As soon as a danger is over, let us return to our work, and trust God another time.

16-23 We must watch always against spiritual enemies, and not expect that our warfare will be over till our work is ended. The word of God is the sword of the Spirit, which we ought to have always at hand, and never to have to seek for it, either in our labours, or in our conflicts, as Christians. Every true Christian is both a labourer and a soldier, working with one hand, and fighting with the other. Good work is likely to go on with success, when those who labour in it, make a business of it. And Satan fears to assault the watchful Christian; or, if attacked, the Lord fights for him. Thus must we wait to the close of life, never putting off our armour till our work and warfare are ended; then we shall be welcomed to the rest and joy of our Lord.

View All Discussusion for Nehemiah Chapter 4... 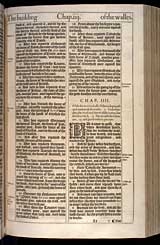