2 And next vnto him builded the men of Iericho: and next to them builded Zaccur the sonne of Imri.

5 And uext vnto them, the Tekoites repaired; but their nobles put not their neckes to the worke of their Lord.

7 And next vnto them repaired Melatiah the Gibeonite, and Iadon the Meronothite, the men of Gibeon, and of Mizpah, vnto the throne of the gouernour on this side the Riuer.

9 And next vnto them repaired Rephaiah the sonne of Hur, the ruler of the halfe part of Ierusalem.

11 Malchiiah the sonne of Harim, and Hashub the son of Pahath Moab, repaired the other piece, & the towre of the furnaces.

12 And next vnto him repaired Shallum the sonne of Halloesh the ruler of the halfe part of Ierusalem, hee, and his daughters.

13 The valley-gate repaired Hanun, and the inhabitants of Zanoah; they built it, and set vp the doores thereof, the lockes thereof, and the bars thereof, and a thousand cubits on the wall, vnto the doung-gate.

14 But the doung-gate repaired Malchiah the sonne of Rechab, the ruler of part of Beth-haccerem: hee built it, and set vp the doores thereof, the lockes thereof, and the barres thereof.

15 But the gate of the fountaine repaired Shallum the sonne of Col-hozeh, the ruler of part of Mizpah: hee built it, and couered it, and set vp the doores thereof, the lockes thereof, and the barres thereof, and the wall of the poole of Siloah by the kings garden, and vnto the staires that goe downe from the citie of Dauid.

16 After him repaired Nehemiah the sonne of Azbuk, the ruler of the halfe part of Beth-zur, vnto the place ouer against the sepulchres of Dauid, and to the poole that was made, and vnto the house of the mightie.

17 After him repaired the Leuites, Rehum the sonne of Bani: next vnto him repaired Hashabiah the ruler of the halfe part of Keilah in his part.

18 After him repaired their brethren, Bauai, the sonne of Henadad the ruler of the halfe part of Keilah.

19 And next to him repaired Ezer the sonne of Ieshua, the ruler of Mizpah, another piece, ouer against the going vp to the armorie, at the turning of the wall.

20 After him Baruch the sonne of Zabbai, earnestly repaired the other piece, from the turning of the wall vnto the doore of the house of Eliashib the high Priest.

22 And after him repaired the Priests, the men of the plaine.

24 After him repaired Binnui the sonne of Henadad, another piece from the house of Azariah, vnto the turning of the wall, euen vnto the corner.

25 Palal the sonne of Uzai, ouer against the turning of the wall, and the tower which lyeth out, from the kings hie house, that was by the court of the prison: after him, Pedaiah the sonne of Parosh.

26 Moreouer the Nethinims dwelt in Ophel, vnto the place ouer against the water gate, toward the East, and the tower that lieth out.

27 After them the Tekoites repaired another piece, ouer against the great tower that lieth out, euen vnto the wall of Ophel.

28 From aboue the horsegate repaired the Priests, euery one ouer against his house.

29 After them repaired Zadok the sonne of Immer, ouer against his house: after him repaired also Shemaiah, the son of Shechaniah, the keeper of the East-gate.

31 After him repaired Malchiah, the goldsmiths sonne, vnto the place of the Nethinims, and of the merchants, ouer against the gate Miphkad, and to the going vp of the corner.

32 And betweene the going vp of the corner vnto the sheepe-gate, repaired the gold-smithes and the merchants.

The rebuilding the walls of Jerusalem.

- The work was divided, so that every one might know what he had to do, and mind it, with a desire to excel; yet without contention, or separate interests. No strife appears among them, but which should do most for the public good. Every Israelite should lend a hand toward the building up of Jerusalem. Let not nobles think any thing below them, by which they may advance the good of their country. Even some females helped forward the work. Some repaired over against their houses, and one repaired over against his chamber. When a general good work is to be done, each should apply himself to that part which is within his reach. If every one will sweep before his own door, the street will be clean; if every one will mend one, we shall all be mended. Some that had first done helped their fellows. The walls of Jerusalem, in heaps of rubbish, represent the desperate state of the world around, while the number and malice of those who hindered the building, give some faint idea of the enemies we have to contend with, while executing the work of God. Every one must begin at home; for it is by getting the work of God advanced in our own souls that we shall best contribute to the good of the church of Christ. May the Lord thus stir up the hearts of his people, to lay aside their petty disputes, and to disregard their worldly interests, compared with building the walls of Jerusalem, and defending the cause of truth and godliness against the assaults of avowed enemies.

View All Discussusion for Nehemiah Chapter 3... 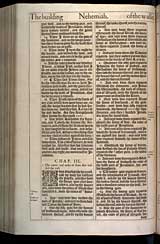