1 On that day they read in the booke of Moses in the audience of the people, and therein was found written, that the Ammonite and the Moabite should not come into the Congregation of God for euer,

2 Because they met not the children of Israel with bread, and with water, but hired Balaam against them, that he should curse them: howbeit our God turned the curse into a blessing.

3 Now it came to passe when they had heard the law, that they separated from Israel all the mixed multitude.

4 ¶ And before this Eliashib the priest hauing the ouersight of the chamber of the house of our God, was allied vnto Tobiah:

5 And hee had prepared for him a great chamber, where aforetime they laid the meat offrings, the frankincense and the vessels, and the tithes of the corne, the new wine, and the oile, which was commanded to be giuen to the Leuites, and the singers, and the porters, and the offerings of the priests.

6 But in all this time was not I at Ierusalem: for in the two and thirtieth yeere of Artaxerxes king of Babylon, came I vnto the king, and after certaine dayes, obtained I leaue of the King:

7 And I came to Ierusalem, and vnderstood of the euil that Eliashib did for Tobiah, in preparing him a chamber in the courts of the house of God.

8 And it grieued me sore, therefore I cast foorth all the houshold stuffe of Tobiah out of the chamber:

9 Then I commanded, and they cleansed the chambers, and thither brought I againe the vessels of the house of God, with the meate offering, and the frankincense.

10 ¶ And I perceiued that the portions of the Leuites had not beene giuen them: for the Leuites and the singers that did the worke, were fled euery one to his field.

11 Then contended I with the rulers, and said, Why is the house of God forsaken? And I gathered them together, and set them in their place.

12 Then brought all Iudah the tithe of the corne, and the new wine, and the oyle, vnto the treasuries.

13 And I made treasurers ouer the treasuries, Shelemiah the priest, and Zadok the scribe, and of the Leuites, Pedaiah: and next to them was Hanan the sonne of Zaccur, the sonne of Mattaniah: for they were counted faithfull, and their office was to distribute vnto their brethren.

14 Remember me, O my God, concerning this, and wipe not out my good deeds, that I haue done for the house of my God, and for the offices thereof.

15 ¶ In those dayes sawe I in Iudah, some treading wine presses on the Sabbath, and bringing in sheaues, and lading asses, as also wine, grapes, and figs, and all maner of burdens, which they brought into Ierusalem on the Sabbath day: and I testified against them in the day wherein they solde victuals.

16 There dwelt men of Tyre also therein, which brought fish and all maner of ware, and solde on the Sabbath vnto the children of Iudah, and in Ierusalem.

17 Then I contended with the Nobles of Iudah, and sayd vnto them, What euill thing is this that ye doe, and profane the Sabbath day?

18 Did not your fathers thus, and did not our God bring all this euill vpon vs, and vpon this citie? yet ye bring more wrath vpon Israel, by profaning the Sabbath.

19 And it came to passe, that when the gates of Ierusalem beganne to be darke before the Sabbath, I commanded that the gates should be shut, and charged that they should not be opened till after the Sabbath: and some of my seruants set I at the gates, that there should no burden be brought in on the Sabbath day.

20 So the merchants, and sellers of all kinde of ware, lodged without Ierusalem once or twice.

21 Then I testified against them, and said vnto them, Why lodge yee about the wall? If ye doe so againe, I will lay hands on you. From that time forth came they no more on the Sabbath.

22 And I commanded the Leuites, that they should cleanse themselues, and that they should come and keepe the gates, to sanctifie the Sabbath day: Remember me, O my God, concerning this also, and spare me, according to the greatnesse of thy mercie.

23 ¶ In those dayes also sawe I Iewes that had maried wiues of Ashdod, of Ammon, and of Moab:

24 And their children spake halfe in the speech of Ashdod, and could not speake in the Iewes language, but according to the language of ech people.

25 And I contended with them, and cursed them, and smote certeine of them, and pluckt off their haire, and made them sweare by God, saying, Yee shall not giue your daughters vnto their sonnes, nor take their daughters vnto your sonnes, or for your selues.

26 Did not Solomon king of Israel sinne by these things? yet among many nations was there no king like him, who was beloued of his God, and God made him king ouer all Israel: neuerthelesse, euen him did outlandish women cause to sinne.

27 Shall wee then hearken vnto you, to doe all this great euill, to transgresse against our God, in marrying strange wiues?

28 And one of the sonnes of Ioiada, the sonne of Eliashib the high Priest, was sonne in law to Sanballat the Horonite: therfore I chased him from me.

30 Thus cleansed I them from all strangers, and appointed the wards of the Priests and the Leuites, euery one in his businesse:

31 And for the wood-offering, at times appointed, and for the first fruits. Remember me, O my God, for good.

Nehemiah turns out the mixed multitude. (1-9) Nehemiah's reform in the house of God. (10-14) Sabbath-breaking restrained. (15-22) The dismissal of strange wives. (23-31)1-9 Israel was a peculiar people, and not to mingle with the nations. See the benefit of publicly reading the word of God; when it is duly attended to, it discovers to us sin and duty, good and evil, and shows wherein we have erred. We profit, when we are thus wrought upon to separate from evil. Those that would drive sin out of their hearts, the living temples, must throw out its household stuff, and all the provision made for it; and take away all the things that are the food and fuel of lust; this is really to mortify it. When sin is cast out of the heart by repentance, let the blood of Christ be applied to it by faith, then let it be furnished with the graces of God's Spirit, for every good work.

10-14 If a sacred character will not keep men from setting an evil example, it must not shelter any one from deserved blame and punishment. The Levites had been wronged; their portions had not been given them. They were gone to get livelihoods for themselves and their families, for their profession would not maintain them. A maintenance not sufficient, makes a poor ministry. The work is neglected, because the workmen are. Nehemiah laid the fault upon the rulers. Both ministers and people, who forsake religion and the services of it, and magistrates, who do not what they can to keep them to it, will have much to answer for. He delayed not to bring the Levites to their places again, and that just payment should be made. Nehemiah on every occasion looked up to God, and committed himself and all his affairs to Him. It pleased him to think that he had been of use to revive and support religion in his country. He here refers to God, not in pride, but with a humble appeal concerning his honest intention in what he had done. He prays, "Remember me;" not, Reward me. "Wipe not out my good deeds;" not, Publish them, or record them. Yet he was rewarded, and his good deeds recorded. God does more than we are able to ask.

15-22 The keeping holy the Lord's day forms an important object for their attention who would promote true godliness. Religion never prospers while sabbaths are trodden under foot. No wonder there was a general decay of religion, and corruption of manners among the Jews, when they forsook the sanctuary and profaned the sabbath. Those little consider what an evil they do, who profane the sabbath. We must answer for the sins others are led to commit by our example. Nehemiah charges it on them as an evil thing, for so it is, proceeding from contempt of God and our own souls. He shows that sabbath-breaking was one of the sins for which God had brought judgments upon them; and if they did not take warning, but returned to the same sins again, they had to expect further judgments. The courage, zeal, and prudence of Nehemiah in this matter, are recorded for us to do likewise; and we have reason to think, that the cure he wrought was lasting. He felt and confessed himself a sinner, who could demand nothing from God as justice, when he thus cried unto him for mercy.

23-31 If either parent be ungodly, corrupt nature will incline the children to take after that one; which is a strong reason why Christians should not be unequally yoked. In the education of children, great care should be taken about the government of their tongues; that they learn not the language of Ashdod, no impious or impure talk, no corrupt communication. Nehemiah showed the evil of these marriages. Some, more obstinate than the rest, he smote, that is, ordered them to be beaten by the officers according to the law, #De 25:2,3|. Here are Nehemiah's prayers on this occasion He prays, "Remember them, O my God." Lord, convince and convert them; put them in mind of what they should be and do. The best services to the public have been forgotten by those for whom they were done, therefore Nehemiah refers himself to God, to recompense him. This may well be the summary of our petitions; we need no more to make us happy than this; Remember me, O my God, for good. We may humbly hope that the Lord will remember us and our services, although, after lives of unwearied activity and usefulness, we shall still see cause to abhor ourselves and repent in dust and ashes, and to cry out with Nehemiah, Spare me, O my God, according to the greatness of they mercy.

View All Discussusion for Nehemiah Chapter 13... 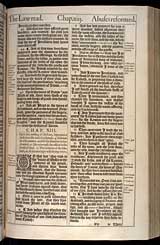