1 In those daies came Iohn the Baptist, preaching in the wildernesse of Iudea,

2 And saying, Repent yee: for the kingdome of heauen is at hand.

3 For this is he that was spoken of by the Prophet Esaias, saying, The voyce of one crying in the wildernes, Prepare ye the way of the Lord, make his paths straight.

4 And the same Iohn had his raiment of camels haire, and a leatherne girdle about his loynes, and his meate was locusts and wilde hony.

5 Then went out to him Hierusalem, and all Iudea, and all the region round about Iordane,

6 And were baptized of him in Iordane, confessing their sinnes.

7 ¶ But when he saw many of the Pharisees and Sadducees come to his Baptisme, he said vnto them, O generation of vipers, who hath warned you to flee from the wrath to come?

9 And thinke not to say within your selues, Wee haue Abraham to our father: For I say vnto you, that God is able of these stones to raise vp children vnto Abraham.

10 And now also the axe is layd vnto the root of the trees: Therefore euery tree which bringeth not foorth good fruite, is hewen downe, and cast into the fire.

11 I indeed baptize you with water vnto repentance: but he that commeth after mee, is mightier then I, whose shooes I am not worthy to beare, hee shall baptize you with the holy Ghost, and with fire.

12 Whose fanne is in his hand, and he will throughly purge his floore, and gather his wheat into the garner: but wil burne vp the chaffe with vnquenchable fire.

13 ¶ Then commeth Iesus from Galilee to Iordane, vnto Iohn, to be baptized of him:

14 But Iohn forbade him, saying, I haue need to bee baptized of thee, and commest thou to me?

15 And Iesus answering, said vnto him, Suffer it to be so now: for thus it becommeth vs to fulfill all righteousnesse. Then he suffered him.

16 And Iesus, when hee was baptized, went vp straightway out of the water: and loe, the heauens were opened vnto him, and he saw the Spirit of God descending like a doue, and lighting vpon him.

17 And loe, a voice from heauen, saying, This is my beloued Sonne, in whom I am well pleased.

John the Baptist, His preaching, manner of life, and baptism. (1-6) John reproves the Pharisees and Sadducees. (7-12) The baptism of Jesus. (13-17)1-6 After Malachi there was no prophet until John the Baptist came. He appeared first in the wilderness of Judea. This was not an uninhabited desert, but a part of the country not thickly peopled, nor much enclosed. No place is so remote as to shut us out from the visits of Divine grace. The doctrine he preached was repentance; "Repent ye." The word here used, implies a total alteration in the mind, a change in the judgment, disposition, and affections, another and a better bias of the soul. Consider your ways, change your minds: you have thought amiss; think again, and think aright. True penitents have other thoughts of God and Christ, sin and holiness, of this world and the other, than they had. The change of the mind produces a change of the way. That is gospel repentance, which flows from a sight of Christ, from a sense of his love, and from hopes of pardon and forgiveness through him. It is a great encouragement to us to repent; repent, for your sins shall be pardoned upon your repentance. Return to God in a way of duty, and he will, through Christ, return unto you in the way of mercy. It is still as necessary to repent and humble ourselves, to prepare the way of the Lord, as it then was. There is a great deal to be done, to make way for Christ into a soul, and nothing is more needful than the discovery of sin, and a conviction that we cannot be saved by our own righteousness. The way of sin and Satan is a crooked way; but to prepare a way for Christ, the paths must be made straight, #Heb 12:13|. Those whose business it is to call others to mourn for sin, and to mortify it, ought themselves to live a serious life, a life of self-denial, and contempt of the world. By giving others this example, John made way for Christ. Many came to John's baptism, but few kept to the profession they made. There may be many forward hearers, where there are few true believers. Curiosity, and love for novelty and variety, may bring many to attend on good preaching, and to be affected for a while, who never are subject to the power of it. Those who received John's doctrine, testified their repentance by confessing their sins. Those only are ready to receive Jesus Christ as their righteousness, who are brought with sorrow and shame to own their guilt. The benefits of the kingdom of heaven, now at hand, were thereupon sealed to them by baptism. John washed them with water, in token that God would cleanse them from all their iniquities, thereby intimating, that by nature and practice all were polluted, and could not be admitted among the people of God, unless washed from their sins in the fountain Christ was to open, #Zec 13:1|.

7-12 To make application to the souls of the hearers, is the life of preaching; so it was of John's preaching. The Pharisees laid their chief stress on outward observances, neglecting the weightier matters of the moral law, and the spiritual meaning of their legal ceremonies. Others of them were detestable hypocrites, making their pretences to holiness a cloak for iniquity. The Sadducees ran into the opposite extreme, denying the existence of spirits, and a future state. They were the scornful infidels of that time and country. There is a wrath to come. It is the great concern of every one to flee from that wrath. God, who delights not in our ruin, has warned us; he warns by the written word, by ministers, by conscience. And those are not worthy of the name of penitents, or their privileges, who say they are sorry for their sins, yet persist in them. It becomes penitents to be humble and low in their own eyes, to be thankful for the least mercy, patient under the greatest affliction, to be watchful against all appearances of sin, to abound in every duty, and to be charitable in judging others. Here is a word of caution, not to trust in outward privileges. There is a great deal which carnal hearts are apt to say within themselves, to put aside the convincing, commanding power of the word of God. Multitudes, by resting in the honours and mere advantages of their being members of an outward church, come short of heaven. Here is a word of terror to the careless and secure. Our corrupt hearts cannot be made to produce good fruit, unless the regenerating Spirit of Christ graft the good word of God upon them. And every tree, however high in gifts and honours, however green in outward professions and performances, if it bring not forth good fruit, the fruits meet for repentance, is hewn down and cast into the fire of God's wrath, the fittest place for barren trees: what else are they good for? If not fit for fruit, they are fit for fuel. John shows the design and intention of Christ's appearing, which they were now speedily to expect. No outward forms can make us clean. No ordinances, by whomsoever administered, or after whatever mode, can supply the want of the baptism of the Holy Ghost and of fire. The purifying and cleansing power of the Holy Spirit alone can produce that purity of heart, and those holy affections, which accompany salvation. It is Christ who baptizes with the Holy Ghost. This he did in the extraordinary gifts of the Spirit sent upon the apostles, #Ac 2:4|. This he does in the graces and comforts of the Spirit, given to those that ask him, #Lu 11:13; Joh 7:38,39|; see #Ac 11:16|. Observe here, the outward church is Christ's floor, #Isa 21:10|. True believers are as wheat, substantial, useful, and valuable; hypocrites are as chaff, light and empty, useless and worthless, carried about with every wind; these are mixed, good and bad, in the same outward communion. There is a day coming when the wheat and chaff shall be separated. The last judgment will be the distinguishing day, when saints and sinners shall be parted for ever. In heaven the saints are brought together, and no longer scattered; they are safe, and no longer exposed; separated from corrupt neighbours without, and corrupt affections within, and there is no chaff among them. Hell is the unquenchable fire, which will certainly be the portion and punishment of hypocrites and unbelievers. Here life and death, good and evil, are set before us: according as we now are in the field, we shall be then in the floor.

13-17 Christ's gracious condescensions are so surprising, that even the strongest believers at first can hardly believe them; so deep and mysterious, that even those who know his mind well, are apt to start objections against the will of Christ. And those who have much of the Spirit of God while here, see that they need to apply to Christ for more. Christ does not deny that John had need to be baptized of him, yet declares he will now be baptized of John. Christ is now in a state of humiliation. Our Lord Jesus looked upon it as well becoming him to fulfil all righteousness, to own every Divine institution, and to show his readiness to comply with all God's righteous precepts. In and through Christ, the heavens are opened to the children of men. This descent of the Spirit upon Christ, showed that he was endued with his sacred influences without measure. The fruit of the Spirit is love, joy, peace, long-suffering, gentleness, goodness, faith, meekness, temperance. At Christ's baptism there was a manifestation of the three Persons in the sacred Trinity. The Father confirming the Son to be Mediator; the Son solemnly entering upon the work; the Holy Spirit descending on him, to be through his mediation communicated to his people. In Him our spiritual sacrifices are acceptable, for He is the altar that sanctifies every gift, #1Pe 2:5|. Out of Christ, God is a consuming fire, but in Christ, a reconciled Father. This is the sum of the gospel, which we must by faith cheerfully embrace.

View All Discussusion for Matthew Chapter 3... 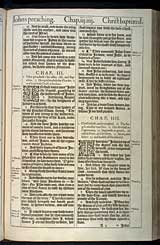