1 In the ende of the Sabbath, as it began to dawne towards the first day of the weeke, came Mary Magdalene, and the other Mary, to see the sepulchre.

2 And behold, there was a great earthquake, for the Angel of the Lord descended from heauen, and came and rolled backe the stone from the doore, and sate vpon it.

3 His countenance was like lightning, and his raiment white as snowe.

4 And for feare of him, the keepers did shake, and became as dead men.

5 And the Angel answered, and said vnto the women, Feare not ye: for I know that ye seeke Iesus, which was crucified.

6 He is not here: for he is risen, as hee said: Come, see the place where the Lord lay.

7 And goe quickly, and tell his disciples that he is risen from the dead. And behold, hee goeth before you into Galilee, there shall ye see him: loe, I haue told you.

8 And they departed quickly from the sepulchre, with feare and great ioy, and did run to bring his disciples word.

9 ¶ And as they went to tell his disciples, behold, Iesus met them, saying, All haile. And they came, and held him by the feet, and worshipped him.

10 Then said Iesus vnto them, Be not afraid: Goe tell my brethren that they goe into Galilee, and there shall they see me.

11 ¶ Now when they were going, behold, some of the watch came into the citie, and shewed vnto the chiefe Priests all the things that were done.

12 And when they were assembled with the Elders, and had taken counsell, they gaue large money vnto the souldiers,

13 Saying, Say ye, His disciples came by night, and stole him away while we slept.

14 And if this come to the gouernours eares, wee will perswade him, and secure you.

15 So they tooke the money, and did as they were taught. And this saying is commonly reported among the Iewes vntill this day.

16 ¶ Then the eleuen disciples went away into Galilee, into a mountaine where Iesus had appointed them.

17 And when they saw him, they worshipped him: but some doubted.

18 And Iesus came, and spake vnto them, saying, All power is giuen vnto me in heauen and in earth.

19 ¶ Goe ye therefore, and teach all nations, baptizing them in the Name of the Father, and of the Sonne, and of the holy Ghost:

20 Teaching them to obserue all things, whatsoeuer I haue commanded you: and loe, I am with you alway, euen vnto the end of the world. Amen.

Christ's resurrection. (1-8) He appears to the women. (9,10) Confession of the soldiers. (11-15) Christ's commission to his disciples. (16-20)1-8 Christ rose the third day after his death; that was the time he had often spoken of. On the first day of the first week God commanded the light to shine out of darkness. On this day did He who is the Light of the world, shine out of the darkness of the grave; and this day is from henceforward often mentioned in the New Testament, as the day which Christians religiously observed in solemn assemblies, to the honour of Christ. Our Lord Jesus could have rolled back the stone by his own power, but he chose to have it done by an angel. The resurrection of Christ, as it is the joy of his friends, so it is the terror and confusion of his enemies. The angel encouraged the women against their fears. Let the sinners in Zion be afraid. Fear not ye, for his resurrection will be your consolation. Our communion with him must be spiritual, by faith in his word. When we are ready to make this world our home, and to say, It is good to be here, then let us remember our Lord Jesus is not here, he is risen; therefore let our hearts rise, and seek the things that are above. He is risen, as he said. Let us never think that strange which the word of Christ has told us to expect; whether the sufferings of this present time, or the glory that is to be revealed. It may have a good effect upon us, by faith to view the place where the Lord lay. Go quickly. It was good to be there, but the servants of God have other work appointed. Public usefulness must be chosen before the pleasure of secret communion with God. Tell the disciples, that they may be comforted under their present sorrows. Christ knows where his disciples dwell, and will visit them. Even to those at a distance from the plenty of the means of grace, he will graciously manifest himself. The fear and the joy together quickened their pace. The disciples of Christ should be forward to make known to each other their experiences of communion with their Lord; and should tell others what God has done for their souls.

9,10 God's gracious visits usually meet us in the way of duty; and to those who use what they have for others' benefit, more shall be given. This interview with Christ was unexpected; but Christ was nigh them, and still is nigh us in the word. The salutation speaks the good-will of Christ to man, even since he entered upon his state of exaltation. It is the will of Christ that his people should be a cheerful, joyful people, and his resurrection furnishes abundant matter for joy. Be not afraid. Christ rose from the dead, to silence his people's fears, and there is enough in that to silence them. The disciples had just before shamefully deserted him in his sufferings; but, to show that he could forgive, and to teach us to do so, he calls them brethren. Notwithstanding his majesty and purity, and our meanness and unworthiness, he still condescends to call believers his brethren.

11-15 What wickedness is it which men will not be brought to by the love of money! Here was large money given to the soldiers for advancing that which they knew to be a lie, yet many grudge a little money for advancing what they know to be the truth. Let us never starve a good cause, when we see bad ones so liberally supported. The priests undertook to secure them from the sword of Pilate, but could not secure these soldiers from the sword of God's justice, which hangs over the heads of those that love and make a lie. Those men promise more than they can perform, who undertake to save a man harmless in doing a wilful sin. But this falsehood disproved itself. Had the soldiers been all asleep, they could not have known what passed. If any had been awake, they would have roused the others and prevented the removal; and certainly if they had been asleep, they never would have dared to confess it; while the Jewish rulers would have been the first to call for their punishment. Again, had there been any truth in the report, the rulers would have prosecuted the apostles with severity for it. The whole shows that the story was entirely false. And we must not charge such things to the weakness of the understanding, but to the wickedness of the heart. God left them to expose their own course. The great argument to prove Christ to be the Son of God, is his resurrection; and none could have more convincing proofs of the truth of that than these soldiers; yet they took bribes to hinder others from believing. The plainest evidence will not affect men, without the work of the Holy Spirit.

16-20 This evangelist passes over other appearances of Christ, recorded by Luke and John, and hastens to the most solemn; one appointed before his death, and after his resurrection. All that see the Lord Jesus with an eye of faith, will worship him. Yet the faith of the sincere may be very weak and wavering. But Christ gave such convincing proofs of his resurrection, as made their faith to triumph over doubts. He now solemnly commissioned the apostles and his ministers to go forth among all nations. The salvation they were to preach, is a common salvation; whoever will, let him come, and take the benefit; all are welcome to Christ Jesus. Christianity is the religion of a sinner who applies for salvation from deserved wrath and from sin; he applies to the mercy of the Father, through the atonement of the incarnate Son, and by the sanctification of the Holy Spirit, and gives up himself to be the worshipper and servant of God, as the Father, Son, and Holy Ghost, three Persons but one God, in all his ordinances and commandments. Baptism is an outward sign of that inward washing, or sanctification of the Spirit, which seals and evidences the believer's justification. Let us examine ourselves, whether we really possess the inward and spiritual grace of a death unto sin, and a new birth unto righteousness, by which those who were the children of wrath become the children of God. Believers shall have the constant presence of their Lord always; all days, every day. There is no day, no hour of the day, in which our Lord Jesus is not present with his churches and with his ministers; if there were, in that day, that hour, they would be undone. The God of Israel, the Saviour, is sometimes a God that hideth himself, but never a God at a distance. To these precious words Amen is added. Even so, Lord Jesus, be thou with us and all thy people; cause thy face to shine upon us, that thy way may be known upon earth, thy saving health among all nations.

View All Discussusion for Matthew Chapter 28... 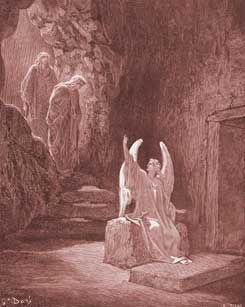 The Angel at the Empty Tomb 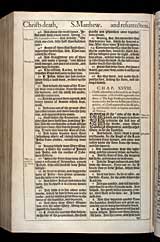