1 Then spake Iesus to the multitude, and to his disciples,

2 Saying, The Scribes and the Pharises sit in Moses seate:

3 All therefore whatsoeuer they bid you obserue, that obserue and doe, but doe not ye after their workes: for they say, and doe not.

4 For they binde heauie burdens, and grieuous to be borne, and lay them on mens shoulders, but they themselues will not mooue them with one of their fingers.

5 But all their workes they doe, for to be seene of men: they make broad their phylacteries, and enlarge the borders of their garments,

6 And loue the vppermost roomes at feasts, and the chiefe seats in the Synagogues,

7 And greetings in the markets, and to be called of men, Rabbi, Rabbi.

8 But be not ye called Rabbi: for one is your Master, euen Christ, and all ye are brethren.

10 Neither be ye called masters: for one is your Master, euen Christ.

11 But hee that is greatest among you, shall be your seruant.

13 ¶ But woe vnto you, Scribes and Pharisees, hypocrites; for yee shut vp the kingdom of heauen against men: For yee neither goe in your selues, neither suffer ye them that are entring, to goe in.

14 Woe vnto you Scribes and Pharisees, hypocrites; for yee deuoure widowes houses, and for a pretence make long prayer; therefore ye shall receiue the greater damnation.

15 Woe vnto you Scribes and Pharises, hypocrites; for yee compasse Sea and land to make one Proselyte, and when hee is made, yee make him two fold more the childe of hell then your selues.

17 Ye fooles and blind: for whether is greater, the gold, or the Temple that sanctifieth the gold?

18 And whosoeuer shall sweare by the Altar, it is nothing: but whosoeuer sweareth by the gift that is vpon it, he is guiltie.

19 Ye fooles and blind: for whether is greater, the gift, or the Altar that sanctifieth the gift?

20 Who so therefore shall sweare by the Altar, sweareth by it, and by all things thereon.

21 And who so shall sweare by the Temple, sweareth by it, and by him that dwelleth therein.

22 And he that shall sweare by heauen, sweareth by the throne of God, and by him that sitteth thereon.

23 Woe vnto you Scribes and Pharisees, hypocrites; for yee pay tithe of mint, and annise, and cummine, and haue omitted the weightier matters of the Law, iudgement, mercie and faith: these ought ye to haue done, and not to leaue the other vndone.

24 Ye blind guides, which straine at a gnat, and swallow a camel.

25 Woe vnto you Scribes and Pharisees, hypocrites; for yee make cleane the outside of the cup, and of the platter, but within they are full of extortion and excesse.

26 Thou blind Pharisee, cleanse first that which is within the cup and platter, that the outside of them may bee cleane also.

27 Woe vnto you Scribes and Pharisees, hypocrites, for yee are like vnto whited sepulchres, which indeed appeare beautifull outward, but are within full of dead mens bones, and of all vncleannesse.

28 Euen so, yee also outwardly appeare righteous vnto men, but within ye are full of hypocrisie and iniquitie.

29 Woe vnto you Scribes and Pharisees, hypocrites, because ye build the tombes of the Prophets, and garnish the sepulchres of the righteous,

30 And say, If wee had beene in the dayes of our fathers, wee would not haue bene partakers with them in the blood of the Prophets.

31 Wherefore ye bee witnesses vnto your selues, that yee are the children of them which killed the Prophets.

32 Fil ye vp then the measure of your fathers.

33 Yee serpents, yee generation of vipers, How can yee escape the damnation of hell?

34 ¶ Wherefore behold, I send vnto you Prophets, and wisemen, and Scribes, and some of them yee shall kill and crucifie, and some of them shall yee scourge in your synagogues, and persecute them from citie to citie:

35 That vpon you may come all the righteous blood shed vpon the earth, from the blood of righteous Abel, vnto the blood of Zacharias, sonne of Barachias, whom yee slew betweene the temple and the altar.

36 Uerily I say vnto you, All these things shal come vpon this generation.

37 O Hierusalem, Hierusalem, thou that killest the Prophets, and stonest them which are sent vnto thee, how often would I haue gathered thy children together, euen as a hen gathereth her chickens vnder her wings, and yee would not?

38 Behold, your house is left vnto you desolate.

39 For I say vnto you, yee shall not see me henceforth, till ye shall say, Blessed is he that commeth in the Name of the Lord.

Jesus reproves the scribes and Pharisees. (1-12) Crimes of the Pharisees. (13-33) The guilt of Jerusalem. (34-39)1-12 The scribes and Pharisees explained the law of Moses, and enforced obedience to it. They are charged with hypocrisy in religion. We can only judge according to outward appearance; but God searches the heart. They made phylacteries. These were scrolls of paper or parchment, wherein were written four paragraphs of the law, to be worn on their foreheads and left arms, #Ex 13:2-10; 13:11-16; De 6:4-9; 11:13-21|. They made these phylacteries broad, that they might be thought more zealous for the law than others. God appointed the Jews to make fringes upon their garments, #Nu 15:38|, to remind them of their being a peculiar people; but the Pharisees made them larger than common, as if they were thereby more religious than others. Pride was the darling, reigning sin of the Pharisees, the sin that most easily beset them, and which our Lord Jesus takes all occasions to speak against. For him that is taught in the word to give respect to him that teaches, is commendable; but for him that teaches, to demand it, to be puffed up with it, is sinful. How much is all this against the spirit of Christianity! The consistent disciple of Christ is pained by being put into chief places. But who that looks around on the visible church, would think this was the spirit required? It is plain that some measure of this antichristian spirit prevails in every religious society, and in every one of our hearts.

13-33 The scribes and Pharisees were enemies to the gospel of Christ, and therefore to the salvation of the souls of men. It is bad to keep away from Christ ourselves, but worse also to keep others from him. Yet it is no new thing for the show and form of godliness to be made a cloak to the greatest enormities. But dissembled piety will be reckoned double iniquity. They were very busy to turn souls to be of their party. Not for the glory of God and the good of souls, but that they might have the credit and advantage of making converts. Gain being their godliness, by a thousand devices they made religion give way to their worldly interests. They were very strict and precise in smaller matters of the law, but careless and loose in weightier matters. It is not the scrupling a little sin that Christ here reproves; if it be a sin, though but a gnat, it must be strained out; but the doing that, and then swallowing a camel, or, committing a greater sin. While they would seem to be godly, they were neither sober nor righteous. We are really, what we are inwardly. Outward motives may keep the outside clean, while the inside is filthy; but if the heart and spirit be made new, there will be newness of life; here we must begin with ourselves. The righteousness of the scribes and Pharisees was like the ornaments of a grave, or dressing up a dead body, only for show. The deceitfulness of sinners' hearts appears in that they go down the streams of the sins of their own day, while they fancy that they should have opposed the sins of former days. We sometimes think, if we had lived when Christ was upon earth, that we should not have despised and rejected him, as men then did; yet Christ in his Spirit, in his word, in his ministers, is still no better treated. And it is just with God to give those up to their hearts' lusts, who obstinately persist in gratifying them. Christ gives men their true characters.

34-39 Our Lord declares the miseries the inhabitants of Jerusalem were about to bring upon themselves, but he does not notice the sufferings he was to undergo. A hen gathering her chickens under her wings, is an apt emblem of the Saviour's tender love to those who trust in him, and his faithful care of them. He calls sinners to take refuge under his tender protection, keeps them safe, and nourishes them to eternal life. The present dispersion and unbelief of the Jews, and their future conversion to Christ, were here foretold. Jerusalem and her children had a large share of guilt, and their punishment has been signal. But ere long, deserved vengeance will fall on every church which is Christian in name only. In the mean time the Saviour stands ready to receive all who come to him. There is nothing between sinners and eternal happiness, but their proud and unbelieving unwillingness.

View All Discussusion for Matthew Chapter 23... 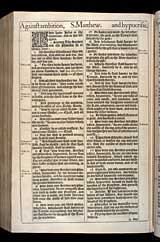