1 Now when Iesus was borne in Bethlehem of Iudea, in the dayes of Herod the king, behold, there came Wise men from the East to Hierusalem,

2 Saying, Where is he that is borne King of the Iewes? for we haue seene his Starre in the East, and are come to worship him.

3 When Herod the king had heard these things, he was troubled, and all Hierusalem with him.

4 And when he had gathered all the chiefe Priests and Scribes of the people together, hee demanded of them where Christ should be borne.

5 And they said vnto him, In Bethlehem of Iudea: For thus it is written by the Prophet;

6 And thou Bethlehem in the land of Iuda, art not the least among the Princes of Iuda: for out of thee shall come a Gouernour, that shall rule my people Israel.

7 Then Herod, when he had priuily called the Wise men, enquired of them diligently what time the Starre appeared:

8 And he sent them to Bethlehem, and said, Goe, and search diligently for the yong child, and when ye haue found him, bring me word againe, that I may come and worship him also.

9 When they had heard the King, they departed, and loe, the Starre which they saw in the East, went before them, till it came and stood ouer where the young childe was.

10 When they saw the Starre, they reioyced with exceeding great ioy.

11 ¶ And when they were come into the house, they saw the yong child with Mary his mother, and fell downe, and worshipped him: and when they had opened their treasures, they presented vnto him gifts, gold, and frankincense, and myrrhe.

12 And being warned of God in a dreame, that they should not returne to Herode, they departed into their owne countrey another way.

13 And when they were departed, behold, the Angel of the Lord appeareth to Ioseph in a dreame, saying, Arise and take the young childe, and his mother, and flee into Egypt, and bee thou there vntill I bring thee word: for Herode will seeke the young childe, to destroy him.

14 When he arose, he tooke the yong childe and his mother by night, and departed into Egypt:

15 And was there vntill the death of Herode, that it might be fulfilled which was spoken of the Lord by the Prophet, saying, Out of Egypt haue I called my sonne.

16 ¶ Then Herode, when hee saw that hee was mocked of the Wise men, was exceeding wroth, and sent foorth, and slewe all the children that were in Bethlehem, and in all the coasts thereof, from two yeeres olde and vnder, according to the time, which he had diligently enquired of the Wise men.

17 Then was fulfilled that which was spoken by Ieremie the Prophet, saying,

18 In Rama was there a voice heard, lamentation, and weeping, and great mourning, Rachel weeping for her children, and would not be comforted, because they are not.

19 ¶ But when Herode was dead, behold, an Angel of the Lord appeareth in a dreame to Ioseph in Egypt,

21 And he arose, and tooke the yong childe and his mother, and came into the land of Israel.

22 But when he heard that Archelaus did reigne in Iudea in the roome of his father Herod, hee was afraid to goe thither: notwithstanding, beeing warned of God in a dreame, he turned aside into the parts of Galilee:

23 And hee came and dwelt in a city called Nazareth, that it might be fulfilled which was spoken by the Prophets, He shalbe called a Nazarene.

The wise men's search after Christ. (1-8) The wise men worship Jesus. (9-12) Jesus carried into Egypt. (13-15) Herod causes the infants of Bethlehem to be massacred. (16-18) Death of Herod, Jesus brought to Nazareth. (19-23)1-8 Those who live at the greatest distance from the means of grace often use most diligence, and learn to know the most of Christ and his salvation. But no curious arts, or mere human learning, can direct men unto him. We must learn of Christ by attending to the word of God, as a light that shineth in a dark place, and by seeking the teaching of the Holy Spirit. And those in whose hearts the day-star is risen, to give them any thing of the knowledge of Christ, make it their business to worship him. Though Herod was very old, and never had shown affection for his family, and was not himself likely to live till a new-born infant had grown up to manhood, he began to be troubled with the dread of a rival. He understood not the spiritual nature of the Messiah's kingdom. Let us beware of a dead faith. A man may be persuaded of many truths, and yet may hate them, because they interfere with his ambition, or sinful indulgences. Such a belief will make him uneasy, and the more resolved to oppose the truth and the cause of God; and he may be foolish enough to hope for success therein.

9-12 What joy these wise men felt upon this sight of the star, none know so well as those who, after a long and melancholy night of temptation and desertion, under the power of a spirit of bondage, at length receive the Spirit of adoption, witnessing with their spirits that they are the children of God. We may well think what a disappointment it was to them, when they found a cottage was his palace, and his own poor mother the only attendant he had. However, these wise men did not think themselves baffled; but having found the King they sought, they presented their gifts to him. The humble inquirer after Christ will not be stumbled at finding him and his disciples in obscure cottages, after having in vain sought them in palaces and populous cities. Is a soul busy, seeking after Christ? Would it worship him, and does it say, Alas! I am a foolish and poor creature, and have nothing to offer? Nothing! Hast thou not a heart, though unworthy of him, dark, hard, and foul? Give it to him as it is, and be willing that he use and dispose of it as it pleases him; he will take it, and will make it better, and thou shalt never repent having given it to him. He shall frame it to his own likeness, and will give thee himself, and be thine for ever. The gifts the wise men presented were gold, frankincense, and myrrh. Providence sent these as a seasonable relief to Joseph and Mary in their present poor condition. Thus our heavenly Father, who knows what his children need, uses some as stewards to supply the wants of others, and can provide for them, even from the ends of the earth.

13-15 Egypt had been a house of bondage to Israel, and particularly cruel to the infants of Israel; yet it is to be a place of refuge to the holy Child Jesus. God, when he pleases, can make the worst of places serve the best of purposes. This was a trial of the faith of Joseph and Mary. But their faith, being tried, was found firm. If we and our infants are at any time in trouble, let us remember the straits in which Christ was when an infant. #16-18| Herod killed all the male children, not only in Bethlehem, but in all the villages of that city. Unbridled wrath, armed with an unlawful power, often carries men to absurd cruelties. It was no unrighteous thing with God to permit this; every life is forfeited to his justice as soon as it begins. The diseases and deaths of little children are proofs of original sin. But the murder of these infants was their martyrdom. How early did persecution against Christ and his kingdom begin! Herod now thought that he had baffled the Old Testament prophecies, and the efforts of the wise men in finding Christ; but whatever crafty, cruel devices are in men's hearts, the counsel of the Lord shall stand.

19-23 Egypt may serve to sojourn in, or take shelter in, for awhile, but not to abide in. Christ was sent to the lost sheep of the house of Israel, to them he must return. Did we but look upon the world as our Egypt, the place of our bondage and banishment, and heaven only as our Canaan, our home, our rest, we should as readily arise and depart thither, when we are called for, as Joseph did out of Egypt. The family must settle in Galilee. Nazareth was a place held in bad esteem, and Christ was crucified with this accusation, Jesus the Nazarene. Wherever Providence allots the bounds of our habitation, we must expect to share the reproach of Christ; yet we may glory in being called by his name, sure that if we suffer with him, we shall also be glorified with him.

View All Discussusion for Matthew Chapter 2... 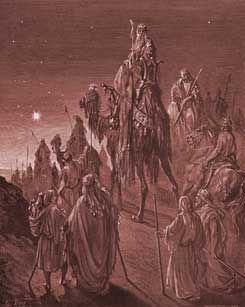 The Magi from the East 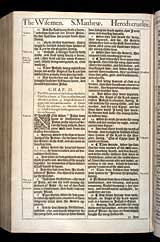