1 At the same time came the Disciples vnto Iesus, saying, Who is the greatest in the Kingdome of heauen?

2 And Iesus called a little child vnto him, and set him in the midst of them,

3 And said, Uerily I say vnto you, Except yee be conuerted, and become as little children, yee shall not enter into the kingdome of heauen.

4 Whosoeuer therefore shall humble himselfe as this little childe, the same is greatest in the Kingdome of heauen.

5 And who so shall receiue one such little child in my name, receiueth me.

6 But who so shall offend one of these little ones which beleeue in me, it were better for him that a milstone were hanged about his necke, and that hee were drowned in the depth of the Sea.

7 ¶ Woe vnto the world because of offences: for it must needs be that offences come: but wo to that man by whom the offence commeth.

8 Wherefore if thy hand or thy foote offend thee, cut them off, and cast them from thee: it is better for thee to enter into life halt or maimed, rather then hauing two hands or two feete, to be cast into euerlasting fire.

9 And if thine eie offend thee, plucke it out, and cast it from thee: it is better for thee to enter into life with one eie, rather then hauing two eies, to be cast into hell fire.

10 Take heed that yee despise not one of these little ones: for I say vnto you, that in heauen their Angels do alwaies behold the face of my father which is in heauen.

11 For the sonne of man is come to saue that which was lost.

12 How thinke yee? if a man haue an hundred sheepe, and one of them be gone astray, doth he not leaue the ninetie and nine, and goeth into the mountaines, and seeketh that which is gone astray?

13 And if so be that he find it, Uerily I say vnto you, hee reioyceth more of that sheepe, then of the ninetie and nine which went not astray.

14 Euen so, it is not the will of your father which is in heauen, that one of these little ones should perish.

15 ¶ Moreouer, if thy brother shall trespasse against thee, goe and tell him his fault betweene thee and him alone: if he shall heare thee, thou hast gained thy brother.

16 But if he will not heare thee, then take with thee one or two more, that in the mouth of two or three witnesses, euery word may be established.

19 Againe I say vnto you, that if two of you shall agree on earth as touching any thing that they shall aske, it shall bee done for them of my father which is in heauen.

20 For where two or three are gathered together in my Name, there am I in the midst of them.

21 ¶ Then came Peter to him, and said, Lord, how oft shall my brother sinne against mee, and I forgiue him? till seuen times?

23 ¶ Therefore is the kingdome of heauen likened vnto a certaine king, which would take accompt of his seruants.

24 And when hee had begun to reckon, one was brought vnto him which ought him ten thousand talents.

25 But forasmuch as hee had not to pay, his lord commanded him to bee sold, and his wife, and children, and all that he had, and payment to be made.

26 The seruant therfore fell downe, and worshipped him, saying, Lord, haue patience with mee, and I will pay thee all.

27 Then the Lord of that seruant was moued with compassion, and loosed him, and forgaue him the debt.

28 But the same seruant went out, and found one of his fellow-seruants, which ought him an hundred pence: and hee layd handes on him, and tooke him by the throte, saying, Pay mee that thou owest.

29 And his fellow seruant fell downe at his feete, and besought him, saying, Haue patience with me, and I will pay thee all.

30 And he would not: but went and cast him into prison, till hee should pay the debt.

31 So when his fellow-seruants saw what was done, they were very sorie, and came, and told vnto their lord all that was done.

32 Then his lord, after that hee had called him, said vnto him, O thou wicked seruant, I forgaue thee all that debt because thou desiredst me:

33 Shouldest not thou also haue had compassion on thy fellow-seruant, euen as I had pitie on thee?

34 And his lord was wroth, and deliuered him to the tormentors, till hee should pay all that was due vnto him.

35 So likewise shall my heauenly Father doe also vnto you, if yee from your hearts forgiue not euery one his brother their trespasses.

The importance of humility. (1-6) Caution against offences. (7-14) The removal of offences. (15-20) Conduct towards brethren, The parable of the unmerciful servant. (21-35)1-6 Christ spoke many words of his sufferings, but only one of his glory; yet the disciples fasten upon that, and overlook the others. Many love to hear and speak of privileges and glory, who are willing to pass by the thoughts of work and trouble. Our Lord set a little child before them, solemnly assuring them, that unless they were converted and made like little children, they could not enter his kingdom. Children, when very young, do not desire authority, do not regard outward distinctions, are free from malice, are teachable, and willingly dependent on their parents. It is true that they soon begin to show other dispositions, and other ideas are taught them at an early age; but these are marks of childhood, and render them proper emblems of the lowly minds of true Christians. Surely we need to be daily renewed in the spirit of our minds, that we may become simple and humble, as little children, and willing to be the least of all. Let us daily study this subject, and examine our own spirits.

7-14 Considering the cunning and malice of Satan, and the weakness and depravity of men's hearts, it is not possible but that there should be offences. God permits them for wise and holy ends, that those who are sincere, and those who are not, may be made known. Being told before, that there will be seducers, tempters, persecutors, and bad examples, let us stand on our guard. We must, as far as lawfully we may, part with what we cannot keep without being entangled by it in sin. The outward occasions of sin must be avoided. If we live after the flesh, we must die. If we, through the Spirit, mortify the deeds of the body, we shall live. Christ came into the world to save souls, and he will reckon severely with those who hinder the progress of others who are setting their faces heavenward. And shall any of us refuse attention to those whom the Son of God came to seek and to save? A father takes care of all his children, but is particularly tender of the little ones.

15-20 If a professed Christian is wronged by another, he ought not to complain of it to others, as is often done merely upon report, but to go to the offender privately, state the matter kindly, and show him his conduct. This would generally have all the desired effect with a true Christian, and the parties would be reconciled. The principles of these rules may be practised every where, and under all circumstances, though they are too much neglected by all. But how few try the method which Christ has expressly enjoined to all his disciples! In all our proceedings we should seek direction in prayer; we cannot too highly prize the promises of God. Wherever and whenever we meet in the name of Christ, we should consider him as present in the midst of us.

21-35 Though we live wholly on mercy and forgiveness, we are backward to forgive the offences of our brethren. This parable shows how much provocation God has from his family on earth, and how untoward his servants are. There are three things in the parable: 1. The master's wonderful clemency. The debt of sin is so great, that we are not able to pay it. See here what every sin deserves; this is the wages of sin, to be sold as a slave. It is the folly of many who are under strong convictions of their sins, to fancy they can make God satisfaction for the wrong they have done him. 2. The servant's unreasonable severity toward his fellow-servant, notwithstanding his lord's clemency toward him. Not that we may make light of wronging our neighbour, for that is also a sin against God; but we should not aggravate our neighbour's wronging us, nor study revenge. Let our complaints, both of the wickedness of the wicked, and of the afflictions of the afflicted, be brought to God, and left with him. 3. The master reproved his servant's cruelty. The greatness of sin magnifies the riches of pardoning mercy; and the comfortable sense of pardoning mercy, does much to dispose our hearts to forgive our brethren. We are not to suppose that God actually forgives men, and afterwards reckons their guilt to them to condemn them; but this latter part of the parable shows the false conclusions many draw as to their sins being pardoned, though their after-conduct shows that they never entered into the spirit, or experienced the sanctifying grace of the gospel. We do not forgive our offending brother aright, if we do not forgive from the heart. Yet this is not enough; we must seek the welfare even of those who offend us. How justly will those be condemned, who, though they bear the Christian name, persist in unmerciful treatment of their brethren! The humbled sinner relies only on free, abounding mercy, through the ransom of the death of Christ. Let us seek more and more for the renewing grace of God, to teach us to forgive others as we hope for forgiveness from him.

View All Discussusion for Matthew Chapter 18... 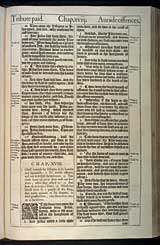