1 Then came to Iesus Scribes and Pharisees, which were of Hierusalem, saying,

2 Why do thy disciples transgresse the tradition of the Elders? for they wash not their handes when they eat bread.

3 But hee answered, and said vnto them, Why doe you also transgresse the Commandement of God by your tradition?

4 For God commaunded, saying, Honour thy father and mother: And hee that curseth father or mother, let him die the death.

5 But yee say, Whosoeuer shall say to his father or his mother, It is a gift by whatsoeuer thou mightest bee profited by me,

6 And honour not his father or his mother, hee shall be free. Thus haue yee made the Commaundement of God of none effect by your tradition.

7 Yee hypocrites, well did Esaias prophecie of you, saying,

9 But in vaine they do worship me, teaching for doctrines, the commandements of men.

10 ¶ And he called the multitude, and said vnto them, Heare and vnderstand.

12 Then came his disciples, and said vnto him, Knowest thou that the Pharisees were offended after they heard this saying?

13 But he answered and said, Euery plant which my heauenly father hath not planted, shalbe rooted vp.

15 Then answered Peter, and said vnto him, Declare vnto vs this parable.

16 And Iesus said, Are yee also yet without vnderstanding?

17 Doe not yee yet vnderstand, that whatsoeuer entreth in at the mouth, goeth into the belly, and is cast out into the draught?

18 But those things which proceed out of the mouth, come forth from the heart, and they defile the man.

20 These are the things which defile a man: But to eate with vnwashen hands, defileth not a man.

21 ¶ Then Iesus went thence, and departed into the coastes of Tyre and Sidon.

22 And behold, a woman of Canaan came out of the same coasts, & cried vnto him, saying, Haue mercy on me, O Lord, thou sonne of Dauid, my daughter is grieuously vexed with a deuill.

23 But he answered her not a word. And his disciples came, and besought him, saying, Send her away, for she cryeth after vs.

24 But he answered, and said, I am not sent, but vnto the lost sheepe of the house of Israel.

25 Then came she, and worshipped him, saying, Lord, helpe me.

26 But he answered, and said, It is not meete to take the childrens bread, and to cast it to dogs.

27 And she said, Trueth Lord: yet the dogs eat of the crummes which fall from their masters table.

28 Then Iesus answered, and said vnto her, O woman, great is thy faith: be it vnto thee euen as thou wilt. And her daughter was made whole from that very houre.

29 And Iesus departed frō thence, and came nigh vnto the sea of Galile, and went vp into a mountaine, and sate downe there.

30 And great multitudes came vnto him, hauing with them those that were lame, blinde, dumbe, maimed, and many others, and cast them downe at Iesus feet, and he healed them:

31 Insomuch that the multitude wondred, when they saw the dumbe to speake, the maimed to be whole, the lame to walke, and the blind to see: and they glorified the God of Israel.

32 ¶ Then Iesus called his disciples vnto him, and said, I haue compassion on the multitude, because they continue with me now three dayes, and haue nothing to eate: and I will not send them away fasting, lest they faint in the way.

33 And his disciples say vnto him, Whence should we haue so much bread in the wildernesse, as to fill so great a multitude?

34 And Iesus saith vnto them, How many loaues haue yee? And they said, Seuen, and a few little fishes.

35 And hee commaunded the multitude to sit downe on the ground.

36 And he tooke the seuen loaues and the fishes, and gaue thankes, and brake them, and gaue to his disciples, and the disciples to the multitude.

37 And they did all eate, and were filled: and they tooke vp of the broken meate that was left, seuen baskets full.

38 And they that did eat, were foure thousand men, beside women and children.

39 And he sent away the multitude, and tooke ship, and came into the coasts of Magdala.

Jesus discourses about human traditions. (1-9) He warns against things which really defile. (10-20) He heals the daughter of a Syrophenician woman. (21-28) Jesus heals the sick, and miraculously feeds four thousand. (29-39)1-9 Additions to God's laws reflect upon his wisdom, as if he had left out something which was needed, and which man could supply; in one way or other they always lead men to disobey God. How thankful ought we to be for the written word of God! Never let us think that the religion of the Bible can be improved by any human addition, either in doctrine or practice. Our blessed Lord spoke of their traditions as inventions of their own, and pointed out one instance in which this was very clear, that of their transgressing the fifth commandment. When a parent's wants called for assistance, they pleaded, that they had devoted to the temple all they could spare, even though they did not part with it, and therefore their parents must expect nothing from them. This was making the command of God of no effect. The doom of hypocrites is put in a little compass; "In vain do they worship me." It will neither please God, nor profit themselves; they trust in vanity, and vanity will be their recompence.

10-20 Christ shows that the defilement they ought to fear, was not from what entered their mouths as food, but from what came out of their mouths, which showed the wickedness of their hearts. Nothing will last in the soul but the regenerating graces of the Holy Spirit; and nothing should be admitted into the church but what is from above; therefore, whoever is offended by a plain, seasonable declaration of the truth, we should not be troubled at it. The disciples ask to be better taught as to this matter. Where a weak head doubts concerning any word of Christ, an upright heart and a willing mind seek for instruction. It is the heart that is desperately wicked, #Jer 17:9|, for there is no sin in word or deed, which was not first in the heart. They all come out of the man, and are fruits of that wickedness which is in the heart, and is wrought there. When Christ teaches, he will show men the deceitfulness and wickedness of their own hearts; he will teach them to humble themselves, and to seek to be cleansed in the Fountain opened for sin and uncleanness.

21-28 The dark corners of the country, the most remote, shall share Christ's influences; afterwards the ends of the earth shall see his salvation. The distress and trouble of her family brought a woman to Christ; and though it is need that drives us to Christ, yet we shall not therefore be driven from him. She did not limit Christ to any particular instance of mercy, but mercy, mercy, is what she begged for: she pleads not merit, but depends upon mercy. It is the duty of parents to pray for their children, and to be earnest in prayer for them, especially for their souls. Have you a son, a daughter, grievously vexed with a proud devil, an unclean devil, a malicious devil, led captive by him at his will? this is a case more deplorable than that of bodily possession, and you must bring them by faith and prayer to Christ, who alone is able to heal them. Many methods of Christ's providence, especially of his grace, in dealing with his people, which are dark and perplexing, may be explained by this story, which teaches that there may be love in Christ's heart while there are frowns in his face; and it encourages us, though he seems ready to slay us, yet to trust in him. Those whom Christ intends most to honour, he humbles to feel their own unworthiness. A proud, unhumbled heart would not have borne this; but she turned it into an argument to support her request. The state of this woman is an emblem of the state of a sinner, deeply conscious of the misery of his soul. The least of Christ is precious to a believer, even the very crumbs of the Bread of life. Of all graces, faith honours Christ most; therefore of all graces Christ honours faith most. He cured her daughter. He spake, and it was done. From hence let such as seek help from the Lord, and receive no gracious answer, learn to turn even their unworthiness and discouragements into pleas for mercy.

29-39 Whatever our case is, the only way to find ease and relief, is to lay it at Christ's feet, to submit it to him, and refer it to his disposal. Those who would have spiritual healing from Christ, must be ruled as he pleases. See what work sin has made; what various diseases human bodies are subject to. Here were such diseases as fancy could neither guess the cause nor the cure of, yet these were subject to the command of Christ. The spiritual cures that Christ works are wonderful. When blind souls are made to see by faith, the dumb to speak in prayer, the maimed and the lame to walk in holy obedience, it is to be wondered at. His power was also shown to the multitude, in the plentiful provision he made for them: the manner is much the same as before. All did eat, and were filled. Those whom Christ feeds, he fills. With Christ there is bread enough, and to spare; supplies of grace for more than seek it, and for those that seek for more. Christ sent away the people. Though he had fed them twice, they must not look for miracles to find their daily bread. Let them go home to their callings and their own tables. Lord, increase our faith, and pardon our unbelief, teaching us to live upon thy fulness and bounty, for all things pertaining to this life, and that which is to come.

View All Discussusion for Matthew Chapter 15... 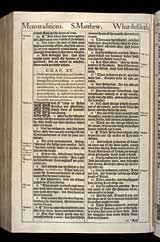