1 At that time Herod the Tetrarch heard of the fame of Iesus,

2 And said vnto his seruants, This is Iohn the Baptist, hee is risen from the dead, and therfore mighty workes doe shew foorth themselues in him.

3 ¶ For Herode had layd hold on Iohn, and bound him, and put him in prison for Herodias sake, his brother Philips wife.

4 For Iohn said vnto him, It is not lawfull for thee to haue her.

5 And when he would haue put him to death, hee feared the multitude, because they counted him as a Prophet.

6 But when Herods birth day was kept, the daughter of Herodias daunced before them, and pleased Herode.

7 Whereupon he promised with an oath, to giue her whatsoeuer she would aske.

8 And she, being before instructed of her mother, said, Giue me heere Iohn Baptists head in a charger.

9 And the king was sorie: neuerthelesse for the othes sake, and them which sate with him at meate, he commanded it to be giuen her:

10 And he sent, and beheaded Iohn in the prison.

11 And his head was brought in a charger, and giuen to the Damsell: and she brought it to her mother.

12 And his Disciples came, and took vp the body, and buried it, and went and told Iesus.

13 ¶ When Iesus heard of it, he departed thence by ship, into a desert place apart: and when the people had heard thereof, they followed him on foote, out of the cities.

14 And Iesus went forth, and saw a great multitude, and was mooued with compassion toward them, and he healed their sicke.

15 ¶ And when it was euening, his Disciples came to him, saying, This is a desert place, and the time is now past; send the multitude away, that they may goe into the villages, and buy themselues victuals.

16 But Iesus said vnto them, They neede not depart; giue yee them to eate.

17 And they say vnto him, We haue heere but fiue loaues, and two fishes.

19 And hee commanded the multitude to sit downe on the grasse, & tooke the fiue loaues, and the two fishes, and looking vp to heauen, hee blessed, and brake, and gaue the loaues to his Disciples, and the Disciples to the multitude.

20 And they did all eat, & were filled: and they tooke vp of the fragments that remained twelue baskets full.

21 And they that had eaten, were about fiue thousand men, beside women and children.

22 ¶ And straightway Iesus constrained his Disciples to get into a ship, and to goe before him vnto the other side, while he sent the multitudes away.

23 And when he had sent the multitudes away, he went vp into a mountaine apart to pray: and when the euening was come, he was there alone:

24 But the ship was now in the midst of the Sea, tossed with waues: for the wind was contrary.

25 And in the fourth watch of the night, Iesus went vnto them, walking on the Sea.

26 And when the Disciples saw him walking on the Sea, they were troubled, saying, It is a spirit: and they cried out for feare.

27 But straightway Iesus spake vnto them, saying, Be of good cheere: it is I, be not afraid.

28 And Peter answered him, and said, Lord, if it be thou, bid me come vnto thee on the water.

29 And he said, Come. And when Peter was come downe out of the ship, he walked on the water, to go to Iesus.

30 But when he saw the wind boysterous, he was afraid: and beginning to sinke, he cried, saying, Lord saue me.

31 And immediately Iesus stretched foorth his hand, and caught him, and said vnto him, O thou of little faith, wherefore didst thou doubt?

32 And when they were come into the ship, the wind ceased.

33 Then they that were in the ship, came and worshipped him, saying, Of a trueth thou art the sonne of God.

34 ¶ And when they were gone ouer, they came into þe land of Genesaret.

35 And when the men of that place had knowledge of him, they sent out into all that countrey round about, and brought vnto him al that were diseased,

36 And besought him, that they might onely touch the hemme of his garment; and as many as touched, were made perfectly whole.

Death of John the Baptist. (1-12) Five thousand people miraculously fed. (13-21) Jesus walks upon the sea. (22-33) Jesus healing the sick. (34-36)1-12 The terror and reproach of conscience, which Herod, like other daring offenders, could not shake off, are proofs and warnings of a future judgment, and of future misery to them. But there may be the terror of convictions, where there is not the truth of conversion. When men pretend to favour the gospel, yet live in evil, we must not favour their self-delusion, but must deliver our consciences as John did. The world may call this rudeness and blind zeal. False professors, or timid Christians, may censure it as want of civility; but the most powerful enemies can go no further than the Lord sees good to permit. Herod feared that the putting of John to death might raise a rebellion among the people, which it did not; but he never feared it might stir up his own conscience against him, which it did. Men fear being hanged for what they do not fear being damned for. And times of carnal mirth and jollity are convenient times for carrying on bad designs against God's people. Herod would profusely reward a worthless dance, while imprisonment and death were the recompence of the man of God who sought the salvation of his soul. But there was real malice to John beneath his consent, or else Herod would have found ways to get clear of his promise. When the under shepherds are smitten, the sheep need not be scattered while they have the Great Shepherd to go to. And it is better to be drawn to Christ by want and loss, than not to come to him at all.

13-21 When Christ and his word withdraw, it is best for us to follow, seeking the means of grace for our souls before any worldly advantages. The presence of Christ and his gospel, makes a desert not only tolerable, but desirable. This little supply of bread was increased by Christ's creating power, till the whole multitude were satisfied. In seeking the welfare of men's souls, we should have compassion on their bodies likewise. Let us also remember always to crave a blessing on our meals, and learn to avoid all waste, as frugality is the proper source of liberality. See in this miracle an emblem of the Bread of life, which came down from heaven to sustain our perishing souls. The provisions of Christ's gospel appear mean and scanty to the world, yet they satisfy all that feed on him in their hearts by faith with thanksgiving.

22-33 Those are not Christ's followers who cannot enjoy being alone with God and their own hearts. It is good, upon special occasions, and when we find our hearts enlarged, to continue long in secret prayer, and in pouring out our hearts before the Lord. It is no new thing for Christ's disciples to meet with storms in the way of duty, but he thereby shows himself with the more grace to them and for them. He can take what way he pleases to save his people. But even appearances of deliverance sometimes occasion trouble and perplexity to God's people, from mistakes about Christ. Nothing ought to affright those that have Christ near them, and know he is theirs; not death itself. Peter walked upon the water, not for diversion or to boast of it, but to go to Jesus; and in that he was thus wonderfully borne up. Special supports are promised, and are to be expected, but only in spiritual pursuits; nor can we ever come to Jesus, unless we are upheld by his power. Christ bade Peter come, not only that he might walk upon the water, and so know his Lord's power, but that he might know his own weakness. And the Lord often lets his servants have their choice, to humble and prove them, and to show the greatness of his power and grace. When we look off from Christ, and look at the greatness of opposing difficulties, we shall begin to fall; but when we call to him, he will stretch out his arm, and save us. Christ is the great Saviour; those who would be saved, must come to him, and cry to him, for salvation; we are never brought to this, till we find ourselves sinking: the sense of need drives us to him. He rebuked Peter. Could we but believe more, we should suffer less. The weakness of faith, and the prevailing of our doubts, displease our Lord Jesus, for there is no good reason why Christ's disciples should be of a doubtful mind. Even in a stormy day he is to them a very present help. None but the world's Creator could multiply the loaves, none but its Governor could tread upon the waters of the sea: the disciples yield to the evidence, and confess their faith. They were suitably affected, and worshipped Christ. He that comes to God, must believe; and he that believes in God, will come, #Heb 11:6|.

34-36 Whithersoever Christ went, he was doing good. They brought unto him all that were diseased. They came humbly beseeching him to help them. The experiences of others may direct and encourage us in seeking for Christ. As many as touched, were made perfectly whole. Those whom Christ heals, he heals perfectly. Were men more acquainted with Christ, and with the diseased state of their souls, they would flock to receive his healing influences. The healing virtue was not in the finger, but in their faith; or rather, it was in Christ, whom their faith took hold upon.

View All Discussusion for Matthew Chapter 14... 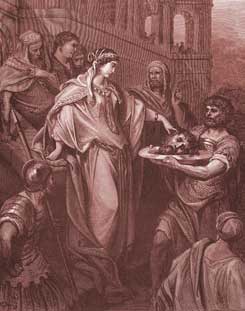 Herod's Daughter Receives the Head of John the Baptist 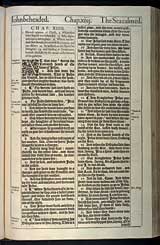