1 Then came together vnto him the Pharises, and certain of the Scribes, which came from Hierusalem.

2 And when they saw some of his disciples eate bread with defiled (that is to say, with vnwashen) hands, they found fault.

3 For the Pharises and all the Iewes, except they wash their hands oft, eate not, holding the tradition of the elders.

4 And when they come from the market, except they wash, they eate not. And many other things there be, which they haue receiued to hold, as the washing of cups and pots, brasen vessels, and of tables.

5 Then the Pharises and Scribes asked him, Why walke not thy disciples according to the tradition of the Elders, but eate bread with vnwashen hands?

6 He answered and said vnto them, Well hath Esaias prophesied of you Hypocrites, as it is written, This people honoureth mee with their lips, but their heart is farre from me.

7 Howbeit in vaine doe they worship me, teaching for doctrines, the commandements of men.

8 For laying aside the Commandement of God, yee hold the tradition of men, as the washing of pots, and cups: and many other such like things ye doe.

9 And he said vnto them, Full well ye reiect the Commandement of God, that ye may keepe your owne tradition.

10 For Moses said, Honour thy father & thy mother: and who so curseth father or mother, let him die the death.

11 But ye say, If a man shall say to his father or mother, It is Corban, that is to say, a gift, by whatsoeuer thou mightest be profited by me: he shalbe free.

12 And ye suffer him no more to doe ought for his father, or his mother:

13 Making the word of God of none effect through your tradition, which ye haue deliuered: And many such like things doe ye.

14 ¶ And when he had called all the people vnto him, hee said vnto them, Hearken vnto me euery one of you, and vnderstand.

15 There is nothing from without a man that entring into him, can defile him: but the things which come out of of him, those are they that defile the man.

16 If any man haue eares to heare, let him heare.

17 And when hee was entred into the house from the people, his disciples asked him concerning the parable.

18 And he saith vnto them, Are ye so without vnderstanding also? Doe yee not perceiue that whatsoeuer thing from without entreth into the man, it cannot defile him,

19 Because it entreth not into his heart, but into the belly, and goeth out into the draught, purging all meats?

20 And he said, That which commeth out of the man, that defileth the man.

21 For from within, out of the heart of men, proceed euill thoughts, adulteries, fornications, murders,

23 All these euill things come from within, and defile the man.

24 ¶ And from thence he arose, and went into the borders of Tyre and Sidon, and entred into an house, and would haue no man know it, but hee could not be hid.

25 For a certaine woman, whose yong daughter had an vncleane spirit, heard of him, and came and fell at his feete.

26 (The woman was a Greek: a Syrophenician by nation:) and she besought him that he would cast forth the deuill out of her daughter.

27 But Iesus said vnto her, Let the children first be filled: for it is not meet to take the childrens bread, and to cast it vnto the dogges.

28 And she answered and said vnto him, Yes Lord, yet the dogges vnder the table eat of the childrens crummes.

29 And hee said vnto her, For this saying, goe thy way, the deuill is gone out of thy daughter.

30 And when shee was come to her house, she found the deuill gone out, and her daughter laied vpon the bed.

31 ¶ And againe departing from the coastes of Tyre and Sidon, he came vnto the sea of Galilee, thorow the midst of the coasts of Decapolis.

32 And they bring vnto him one that was deafe, and had an impediment in his speech: and they beseech him to put his hand vpon him.

33 And he tooke him aside from the multitude, and put his fingers into his eares, and he spit, and touched his tongue,

34 And looking vp to heauen, hee sighed, and saith vnto him, Ephphatha, that is, Be opened.

35 And straightway his eares were opened, and the string of his tongue was loosed, and he spake plaine.

37 And were beyond measure astonished, saying, Hee hath done all things well: hee maketh both the deafe to heare, and the dumbe to speake.

The traditions of the elders. (1-13) What defiles the man. (14-23) The woman of Canaan's daughter cured. (24-30) Christ restores a man to hearing and speech. (31-37)1-13 One great design of Christ's coming was, to set aside the ceremonial law; and to make way for this, he rejects the ceremonies men added to the law of God's making. Those clean hands and that pure heart which Christ bestows on his disciples, and requires of them, are very different from the outward and superstitious forms of Pharisees of every age. Jesus reproves them for rejecting the commandment of God. It is clear that it is the duty of children, if their parents are poor, to relieve them as far as they are able; and if children deserve to die that curse their parents, much more those that starve them. But if a man conformed to the traditions of the Pharisees, they found a device to free him from the claim of this duty.

14-23 Our wicked thoughts and affections, words and actions, defile us, and these only. As a corrupt fountain sends forth corrupt streams, so does a corrupt heart send forth corrupt reasonings, corrupt appetites and passions, and all the wicked words and actions that come from them. A spiritual understanding of the law of God, and a sense of the evil of sin, will cause a man to seek for the grace of the Holy Spirit, to keep down the evil thoughts and affections that work within.

24-30 Christ never put any from him that fell at his feet, which a poor trembling soul may do. As she was a good woman, so a good mother. This sent her to Christ. His saying, Let the children first be filled, shows that there was mercy for the Gentiles, and not far off. She spoke, not as making light of the mercy, but magnifying the abundance of miraculous cures among the Jews, in comparison with which a single cure was but as a crumb. Thus, while proud Pharisees are left by the blessed Saviour, he manifests his compassion to poor humbled sinners, who look to him for children's bread. He still goes about to seek and save the lost.

31-37 Here is a cure of one that was deaf and dumb. Those who brought this poor man to Christ, besought him to observe the case, and put forth his power. Our Lord used more outward actions in the doing of this cure than usual. These were only signs of Christ's power to cure the man, to encourage his faith, and theirs that brought him. Though we find great variety in the cases and manner of relief of those who applied to Christ, yet all obtained the relief they sought. Thus it still is in the great concerns of our souls.

View All Discussusion for Mark Chapter 7... 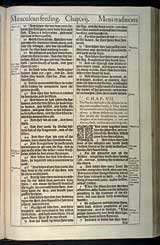