1 And they came ouer vnto the other side of the sea, into the countrey of the Gadarenes.

2 And when hee was come out of the ship, immediatly there met him out of the tombes, a man with an vncleane spirit,

3 Who had his dwelling among the tombs, and no man could binde him, no not with chaines:

4 Because that hee had bene often bound with fetters and chaines, and the chaines had bene plucked asunder by him, and the fetters broken in pieces: neither could any man tame him.

5 And alwayes night and day, hee was in the mountaines, and in the tombes, crying, and cutting himselfe with stones.

6 But when hee saw Iesus afarre off, he came and worshipped him,

7 And cried with a lowd voice, and said, What haue I to doe with thee, Iesus, thou Sonne of the most high God? I adiure thee by God, that thou torment me not.

8 (For he said vnto him, Come out of the man, thou vncleane spirit.)

9 And he asked him, What is thy name? And hee answered, saying, My name is Legion: for we are many.

10 And hee besought him much, that he would not send them away out of the countrey.

11 Now there was there nigh vnto the mountaines a great herd of swine, feeding.

12 And all the deuils besought him, saying, Send vs into the swine, that we may enter into them.

13 And forthwith Iesus gaue them leaue. And the vncleane spirits went out, and entred into the swine, and the herd ranne violently downe a steepe place into the sea (they were about two thousand) and were choked in the sea.

14 And they that fed the swine fled, and tolde it in the citie, and in the countrey. And they went out to see what it was that was done.

15 And they come to Iesus, and see him that was possessed with the deuill, and had the Legion, sitting, and clothed, and in his right minde: and they were afraid.

16 And they that saw it, tolde them how it befell to him that was possessed with the deuill, and also concerning the swine.

17 And they began to pray him to depart out of their coasts.

18 And when hee was come into the ship, he that had bene possessed with the deuill prayed him that hee might bee with him.

19 Howbeit Iesus suffered him not, but saith vnto him, Goe home to thy friends, and tel them how great things the Lord hath done for thee, and hath had compassion on thee.

20 And hee departed, and began to publish in Decapolis, how great things Iesus had done for him: and all men did marueile.

21 And when Iesus was passed ouer againe by ship vnto the other side, much people gathered vnto him, and he was nigh vnto the Sea.

22 And behold, there commeth one of the Rulers of the Synagogue, Iairus by name, and when he saw him, he fell at his feete,

23 And besought him greatly, saying, My litle daughter lieth at the point of death, I pray thee come and lay thy hands on her, that shee may be healed, and she shall liue.

24 And Iesus went with him, and much people followed him, and thronged him.

25 And a certaine woman which had an issue of blood twelue yeeres,

26 And had suffered many things of many Physicians, and had spent all that she had, and was nothing bettered, but rather grew worse,

27 When shee had heard of Iesus, came in the prease behinde, and touched his garment.

28 For she said, If I may touch but his clothes, I shalbe whole.

29 And straightway the fountaine of her blood was dried vp: and she felt in her body that she was healed of that plague.

30 And Iesus immediatly knowing in himselfe that vertue had gone out of him, turned him about in the preasse, and said, Who touched my clothes?

31 And his disciples said vnto him, Thou seest the multitude thronging thee, and sayest thou, Who touched me?

32 And he looked round about to see her that had done this thing.

33 But the woman fearing and trembling, knowing what was done in her, came and fell downe before him, and tolde him all the trueth.

34 And he said vnto her, Daughter, thy faith hath made thee whole, goe in peace, and be whole of thy plague.

35 While hee yet spake, there came from the Ruler of the Synagogues house, certaine which said, Thy daughter is dead, why troublest thou the Master any further?

36 Assoone as Iesus heard the word that was spoken, he saith vnto the Ruler of the Synagogue, Be not afraid, onely beleeue.

37 And he suffered no man to follow him, saue Peter, & Iames, and Iohn the brother of Iames.

38 And hee commeth to the house of the Ruler of the Synagogue, and seeth the tumult, and them that wept and wailed greatly.

39 And when he was come in, hee saith vnto them, Why make yee this adoe, and weepe? the damosell is not dead, but sleepeth.

40 And they laughed him to scorne: but when he had put them all out, hee taketh the father and the mother of the damosell, and them that were with him, and entreth in where the damosell was lying.

41 And he tooke the damosell by the hand, and said vnto her, Talitha cumi, which is, being interpreted, Damosell (I say vnto thee) Arise.

42 And straightway the damosell arose, and walked, for shee was of the age of twelue yeeres: and they were astonished with a great astonishment.

43 And hee charged them straitly, that no man should know it: and commanded that some thing should be giuen her to eate.

The demoniac healed. (1-20) A woman healed. (21-34) The daughter of Jairus raised. (35-43)1-20 Some openly wilful sinners are like this madman. The commands of the law are as chains and fetters, to restrain sinners from their wicked courses; but they break those bands in sunder; and it is an evidence of the power of the devil in them. A legion of soldiers consisted of six thousand men, or more. What multitudes of fallen spirits there must be, and all enemies to God and man, when here was a legion in one poor wretched creature! Many there are that rise up against us. We are not a match for our spiritual enemies, in our own strength; but in the Lord, and in the power of his might, we shall be able to stand against them, though there are legions of them. When the vilest transgressor is delivered by the power of Jesus from the bondage of Satan, he will gladly sit at the feet of his Deliverer, and hear his word, who delivers the wretched slaves of Satan, and numbers them among his saints and servants. When the people found that their swine were lost, they had a dislike to Christ. Long-suffering and mercy may be seen, even in the corrections by which men lose their property while their lives are saved, and warning given them to seek the salvation of their souls. The man joyfully proclaimed what great things Jesus had done for him. All men marvelled, but few followed him. Many who cannot but wonder at the works of Christ, yet do not, as they ought, wonder after him.

21-34 A despised gospel will go where it will be better received. One of the rulers of a synagogue earnestly besought Christ for a little daughter, about twelve years old, who was dying. Another cure was wrought by the way. We should do good, not only when in the house, but when we walk by the way, #De 6:7|. It is common with people not to apply to Christ till they have tried in vain all other helpers, and find them, as certainly they will, physicians of no value. Some run to diversions and gay company; others plunge into business, or even into intemperance; others go about to establish their own righteousness, or torment themselves by vain superstitions. Many perish in these ways; but none will ever find rest to the soul by such devices; while those whom Christ heals of the disease of sin, find in themselves an entire change for the better. As secret acts of sin, so secret acts of faith, are known to the Lord Jesus. The woman told all the truth. It is the will of Christ that his people should be comforted, and he has power to command comfort to troubled spirits. The more simply we depend on Him, and expect great things from him, the more we shall find in ourselves that he is become our salvation. Those who, by faith, are healed of their spiritual diseases, have reason to go in peace.

35-43 We may suppose Jairus hesitating whether he should ask Christ to go on or not, when told that his daughter was dead. But have we not as much occasion for the grace of God, and the comfort of his Spirit, for the prayers of our ministers and Christian friends, when death is in the house, as when sickness is there? Faith is the only remedy against grief and fear at such a time. Believe the resurrection, then fear not. He raised the dead child to life by a word of power. Such is the gospel call to those who are by nature dead in trespasses and sins. It is by the word of Christ that spiritual life is given. All who saw it, and heard of it, admired the miracle, and Him that wrought it. Though we cannot now expect to have our dead children or relatives restored, we may hope to find comfort under our trials.

View All Discussusion for Mark Chapter 5... 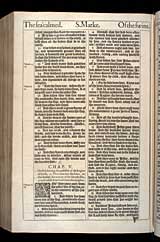