1 And he beganne againe to teach by the Sea side: and there was gathered vnto him a great multitude, so that he entred into a ship, and sate in the Sea: and the whole multitude was by the Sea on the land.

2 And he taught them many things by parables, and said vnto them in his doctrine,

3 Hearken, Behold, there went out a sower to sow:

4 And it came to passe as he sowed, some fell by the way side, and the foules of the aire came, & deuoured it vp.

5 And some fell on stonie ground, where it had not much earth: and immediately it sprang vp, because it had no depth of earth.

6 But when the Sunne was vp, it was scorched, and because it had no roote, it withered away.

7 And some fell among thornes, and the thornes grew vp, and choked it, and it yeelded no fruite.

8 And other fell on good ground, and did yeeld fruite that sprang vp, and increased, and brought foorth some thirtie, & some sixtie, & some an hundred.

9 And he said vnto them, He that hath eares to heare, let him heare.

10 And when hee was alone, they that were about him, with the twelue, asked of him the parable.

11 And he said vnto them, Unto you it is giuen to know the mystery of the kingdome of God: but vnto them that are without, all these things are done in parables:

12 That seeing they may see, and not perceiue, and hearing they may heare, and not vnderstand, lest at any time they should be conuerted, and their sinnes should be forgiuen them.

13 And he said vnto them, Know ye not this parable? And how then will you know all parables?

14 ¶ The Sower soweth the word.

15 And these are they by the way side, where the word is sowen, but when they haue heard, Satan commeth immediately, and taketh away the word that was sowen in their hearts.

16 And these are they likewise which are sowen on stonie ground, who when they haue heard the word, immediately receiue it with gladnesse:

17 And haue no roote in themselues, and so endure but for a time: afterward when affliction or persecution ariseth for the words sake, immediately they are offended.

18 And these are they which are sowen among thorns: such as heare the word,

19 And the cares of this world, and the deceitfulnesse of riches, and the lusts of other things entring in, choke the word, and it becommeth vnfruitfull.

20 And these are they which are sowen on good ground, such as heare the word, and receiue it, & bring foorth fruit, some thirty fold, some sixtie, and some an hundred.

21 ¶ And he said vnto them, Is a candle brought to be put vnder a bushell, or vnder a bed? & not to be set on a candlesticke?

22 For there is nothing hid, which shall not be manifested: neither was any thing kept secret, but that it should come abroad.

23 If any man haue eares to heare, let him heare.

24 And he said vnto them, Take heed what you heare: With what measure ye mete, it shalbe measured to you: And vnto you that heare, shal more be giuen.

26 ¶ And he said, So is the kingdome of God, as if a man should cast seede into the ground,

27 And should sleepe, and rise night and day, and the seed should spring, and grow vp, he knoweth not how.

28 For the earth bringeth foorth fruite of herselfe, first the blade, then the eare, after that the full corne in the eare.

29 But when the fruite is brought foorth, immediately he putteth in the sickle, because the haruest is come.

30 ¶ And he said, Wherunto shal we liken the kingdome of God? Or with what comparison shall we compare it?

31 It is like a graine of mustard seed: which when it is sowen in the earth, is lesse then all the seedes that be in the earth.

32 But when it is sowen, it groweth vp, and becommeth greater then all herbes, & shooteth out great branches, so that the fowles of the aire may lodge vnder the shadow of it.

33 And with many such parables spake hee the word vnto them, as they were able to heare it.

34 But without a parable spake he not vnto them, and when they were alone, hee expounded all things to his disciples.

35 And the same day, when the Euen was come, he saith vnto them, Let vs passe ouer vnto the other side.

36 And when they had sent away the multitude, they tooke him, euen as he was in the ship, and there were also with him other litle ships.

37 And there arose a great storme of wind, and the waues beat into the ship, so that it was now full.

38 And he was in the hinder part of the ship asleepe on a pillow: and they awake him, and say vnto him, Master, carest thou not, that we perish?

39 And hee arose, and rebuked the winde, and said vnto the sea, Peace, be still: and the winde ceased, and there was a great calme.

40 And he said vnto them, Why are ye so fearefull? How is it that you haue no faith?

41 And they feared exceedingly, and saide one to another, What maner of man is this, that euen the winde and the sea obey him?

The parable of the sower. (1-20) Other parables. (21-34) Christ stills the tempest. (35-41)1-20 This parable contained instruction so important, that all capable of hearing were bound to attend to it. There are many things we are concerned to know; and if we understand not the plain truths of the gospel, how shall we learn those more difficult! It will help us to value the privileges we enjoy as disciples of Christ, if we seriously consider the deplorable state of all who have not such privileges. In the great field of the church, the word of God is dispensed to all. Of the many that hear the word of the gospel, but few receive it, so as to bring forth fruit. Many are much affected with the word for the present, who yet receive no abiding benefit. The word does not leave abiding impressions upon the minds of men, because their hearts are not duly disposed to receive it. The devil is very busy about careless hearers, as the fowls of the air go about the seed that lies above ground. Many continue in a barren, false profession, and go down to hell. Impressions that are not deep, will not last. Many do not mind heart-work, without which religion is nothing. Others are hindered from profiting by the word of God, by abundance of the world. And those who have but little of the world, may yet be ruined by indulging the body. God expects and requires fruit from those who enjoy the gospel, a temper of mind and Christian graces daily exercised, Christian duties duly performed. Let us look to the Lord, that by his new-creating grace our hearts may become good ground, and that the good seed of the word may produce in our lives those good words and works which are through Jesus Christ, to the praise and glory of God the Father.

21-34 These declarations were intended to call the attention of the disciples to the word of Christ. By his thus instructing them, they were made able to instruct others; as candles are lighted, not to be covered, but to be placed on a candlestick, that they may give light to a room. This parable of the good seed, shows the manner in which the kingdom of God makes progress in the world. Let but the word of Christ have the place it ought to have in a soul, and it will show itself in a good conversation. It grows gradually: first the blade; then the ear; after that the full corn in the ear. When it is sprung up, it will go forward. The work of grace in the soul is, at first, but the day of small things; yet it has mighty products even now, while it is in its growth; but what will there be when it is perfected in heaven!

35-41 Christ was asleep in the storm, to try the faith of his disciples, and to stir them up to pray. Their faith appeared weak, and their prayers strong. When our wicked hearts are like the troubled sea which cannot rest, when our passions are unruly, let us think we hear the law of Christ, saying, Be silent, be dumb. When without are fightings, and within are fears, and the spirits are in a tumult, if he say, "Peace, be still," there is a great calm at once. Why are ye so fearful? Though there may be cause for some fear, yet not for such fear as this. Those may suspect their faith, who can have such a thought as that Jesus careth not though his people perish. How imperfect are the best of saints! Faith and fear take their turns while we are in this world; but ere long, fear will be overcome, and faith will be lost in sight.

View All Discussusion for Mark Chapter 4... 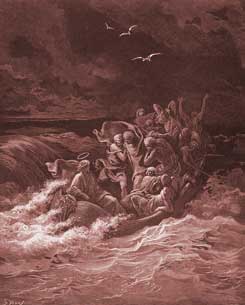 Jesus Calms the Storm at Sea 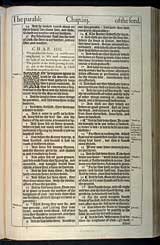