1 And againe hee entred into Capernaum after some dayes, and it was noysed that he was in the house.

2 And straightway many were gathered together, insomuch that there was no roome to receiue them, no not so much as about the doore: and he preached the word vnto them.

3 And they come vnto him, bringing one sicke of the palsie, which was borne of foure.

4 And when they could not come nigh vnto him for preasse, they vncouered the roofe where he was: and when they had broken it vp, they let downe the bed wherin the sick of the palsie lay.

5 When Iesus saw their faith, hee said vnto the sicke of the palsie, Sonne, thy sinnes be forgiuen thee.

6 But there were certaine of the Scribes sitting there, and reasoning in their hearts,

7 Why doeth this man thus speake blasphemies? Who can forgiue sinnes but God onely?

8 And immediatly, when Iesus perceiued in his Spirit, that they so reasoned within themselues, he said vnto them, Why reason ye these things in your hearts?

9 Whether is it easier to say to the sicke of the palsie, Thy sinnes be forgiuen thee: or to say, Arise, and take vp thy bed and walke?

10 But that yee may know that the Sonne of man hath power on earth to forgiue sinnes, (Hee saith to the sicke of the palsie,)

12 And immediatly he arose, tooke vp the bed, and went foorth before them all, insomuch that they were all amazed, and glorified God, saying, Wee neuer saw it on this fashion.

13 And he went foorth againe by the sea side, and all the multitude resorted vnto him, and he taught them.

14 And as he passed by, he saw Leui the son of Alpheus sitting at the receit of Custome, and said vnto him, Follow me. And he arose, and followed him.

15 And it came to passe, that as Iesus sate at meate in his house, many Publicanes and sinners sate also together with Iesus and his disciples: for there were many, & they followed him.

17 When Iesus heard it, he saith vnto them, They that are whole, haue no need of the Physition, but they that are sicke: I came not to call the righteous, but sinners to repentance.

20 But the dayes will come, when the Bridegrome shall bee taken away from them, and then shall they fast in those dayes.

21 No man also soweth a piece of new cloth on an old garment: else the new piece that filled it vp, taketh away from the old, & the rent is made worse.

22 And no man putteth new wine into old bottles, else the new wine doeth burst the bottles, and the wine is spilled, and the bottles will bee marred: But new wine must bee put into new bottles.

23 And it came to passe, that he went thorow the corne fields on the Sabbath day, & his disciples began as they went, to plucke the eares of corne.

24 And the Pharisees saide vnto him, Behold, why do they on the Sabbath day that which is not lawfull?

25 And he said vnto them, Haue ye neuer read what Dauid did, when hee had need, and was an hungred, he, and they that were with him?

26 How hee went into the house of God in the dayes of Abiathar the high Priest, and did eate the Shew-bread, which is not lawfull to eate, but for the Priests, and gaue also to them which were with him?

27 And hee said vnto them, The Sabbath was made for man, and not man for the Sabbath:

28 Therefore the Sonne of man is Lord also of the Sabbath.

Christ heals one sick of the palsy. (1-12) Levi's call, and the entertainment given to Jesus. (13-17) Why Christ's disciples did not fast. (18-22) He justifies his disciples for plucking corn on the sabbath. (23-28)1-12 It was this man's misery that he needed to be so carried, and shows the suffering state of human life; it was kind of those who so carried him, and teaches the compassion that should be in men, toward their fellow-creatures in distress. True faith and strong faith may work in various ways; but it shall be accepted and approved by Jesus Christ. Sin is the cause of all our pains and sicknesses. The way to remove the effect, is to take away the cause. Pardon of sin strikes at the root of all diseases. Christ proved his power to forgive sin, by showing his power to cure the man sick of the palsy. And his curing diseases was a figure of his pardoning sin, for sin is the disease of the soul; when it is pardoned, it is healed. When we see what Christ does in healing souls, we must own that we never saw the like. Most men think themselves whole; they feel no need of a physician, therefore despise or neglect Christ and his gospel. But the convinced, humbled sinner, who despairs of all help, excepting from the Saviour, will show his faith by applying to him without delay.

13-17 Matthew was not a good character, or else, being a Jew, he would never have been a publican, that is, a tax-gatherer for the Romans. However, Christ called this publican to follow him. With God, through Christ, there is mercy to pardon the greatest sins, and grace to change the greatest sinners, and make them holy. A faithful, fair-dealing publican was rare. And because the Jews had a particular hatred to an office which proved that they were subject to the Romans, they gave these tax-gatherers an ill name. But such as these our blessed Lord did not hesitate to converse with, when he appeared in the likeness of sinful flesh. And it is no new thing for that which is both well done and well designed, to be slandered, and turned to the reproach of the wisest and best of men. Christ would not withdraw, though the Pharisees were offended. If the world had been righteous, there had been no occasion for his coming, either to preach repentance, or to purchase forgiveness. We must not keep company with ungodly men out of love to their vain conversation; but we are to show love to their souls, remembering that our good Physician had the power of healing in himself, and was in no danger of taking the disease; but it is not so with us. In trying to do good to others, let us be careful we do not get harm to ourselves.

18-22 Strict professors are apt to blame all that do not fully come up to their own views. Christ did not escape slanders; we should be willing to bear them, as well as careful not to deserve them; but should attend to every part of our duty in its proper order and season.

23-28 The sabbath is a sacred and Divine institution; a privilege and benefit, not a task and drudgery. God never designed it to be a burden to us, therefore we must not make it so to ourselves. The sabbath was instituted for the good of mankind, as living in society, having many wants and troubles, preparing for a state of happiness or misery. Man was not made for the sabbath, as if his keeping it could be of service to God, nor was he commanded to keep it outward observances to his real hurt. Every observance respecting it, is to be interpreted by the rule of mercy.

View All Discussusion for Mark Chapter 2...

The Disciples Pick Corn on the Sabbath 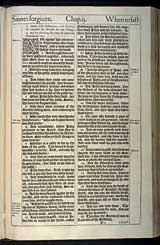