1 And when the Sabbath was past, Mary Magdalene, and Mary the mother of Iames, and Salome, had bought sweete spices, that they might come and anoint him.

2 And very early in the morning, the first day of the week they came vnto the sepulchre, at the rising of the sunne:

3 And they said among themselues, who shall roll vs away the stone from the doore of the sepulchre?

4 (And when they looked, they saw that the stone was rolled away) for it was very great.

5 And entring into the sepulchre, they sawe a young man sitting on the right side, clothed in a long white garment, and they were affrighted.

6 And hee sayth vnto them, Be not affrighted; ye seeke Iesus of Nazareth, which was crucified: he is risen, hee is not here: behold the place where they laide him.

7 But goe your way, tell his disciples, and Peter, that hee goeth before you into Galile, there shall ye see him, as he said vnto you.

8 And they went out quickely, and fledde from the sepulchre, for they trembled, and were amazed, neither sayd they any thing to any man, for they were afraid.

9 ¶ Now when Iesus was risen early, the first day of the weeke, he appeared first to Mary Magdalene, out of whom he had cast seuen deuils.

10 And she went and told them that had beene with him, as they mourned and wept.

11 And they, when they had heard that he was aliue, and had beene seene of her, beleeued not.

12 ¶ After that, he appeared in another forme vnto two of them, as they walked, and went into the countrey.

13 And they went and tolde it vnto the residue, neither beleeued they them.

14 ¶ Afterward he appeared vnto the eleuen, as they sate at meat, and vpbraided them with their vnbeliefe, and hardnesse of heart, because they beleeued not them, which had seene him after he was risen.

15 And he said vnto them, Goe yee into all the world, and preach the Gospel to euery creature.

17 And these signes shal follow them that beleeue, In my Name shall they cast out deuils, they shall speake with new tongues,

18 They shall take vp serpents, and if they drinke any deadly thing, it shall not hurt them, they shall lay hands on the sicke, and they shall recouer.

19 ¶ So then after the Lord had spoken vnto them, he was receiued vp into heauen, and sate on the right hand of God.

20 And they went foorth, and preached euery where, the Lord working with them, and confirming the worde with signes following. Amen.

Christ's resurrection made known the women. (1-8) Christ appears to Mary Magdalene and other disciples. (9-13) His commission to the apostles. (14-18) Christ's ascension. (19,20)1-8 Nicodemus brought a large quantity of spices, but these good women did not think that enough. The respect others show to Christ, should not hinder us from showing our respect. And those who are carried by holy zeal, to seek Christ diligently, will find the difficulties in their way speedily vanish. When we put ourselves to trouble and expense, from love to Christ, we shall be accepted, though our endeavours are not successful. The sight of the angel might justly have encouraged them, but they were affrighted. Thus many times that which should be matter of comfort to us, through our own mistake, proves a terror to us. He was crucified, but he is glorified. He is risen, he is not here, not dead, but alive again; hereafter you will see him, but you may here see the place where he was laid. Thus seasonable comforts will be sent to those that lament after the Lord Jesus. Peter is particularly named, Tell Peter; it will be most welcome to him, for he is in sorrow for sin. A sight of Christ will be very welcome to a true penitent, and a true penitent is very welcome to a sight of Christ. The men ran with all the haste they could to the disciples; but disquieting fears often hinder us from doing that service to Christ and to the souls of men, which, if faith and the joy of faith were strong, we might do.

9-13 Better news cannot be brought to disciples in tears, than to tell them of Christ's resurrection. And we should study to comfort disciples that are mourners, by telling them whatever we have seen of Christ. It was a wise providence that the proofs of Christ's resurrection were given gradually, and admitted cautiously, that the assurance with which the apostles preached this doctrine afterwards might the more satisfy. Yet how slowly do we admit the consolations which the word of God holds forth! Therefore while Christ comforts his people, he often sees it needful to rebuke and correct them for hardness of heart in distrusting his promise, as well as in not obeying his holy precepts.

14-18 The evidences of the truth of the gospel are so full, that those who receive it not, may justly be upbraided with their unbelief. Our blessed Lord renewed his choice of the eleven as his apostles, and commissioned them to go into all the world, to preach his gospel to every creature. Only he that is a true Christian shall be saved through Christ. Simon Magus professed to believe, and was baptized, yet he was declared to be in the bonds of iniquity: see his history in #Ac 8:13-25|. Doubtless this is a solemn declaration of that true faith which receives Christ in all his characters and offices, and for all the purposes of salvation, and which produces its right effect on the heart and life; not a mere assent, which is a dead faith, and cannot profit. The commission of Christ's ministers extends to every creature throughout the world, and the declarations of the gospel contain not only truths, encouragements, and precepts, but also most awful warnings. Observe what power the apostles should be endued with, for confirming the doctrine they were to preach. These were miracles to confirm the truth of the gospel, and means of spreading the gospel among nations that had not heard it.

19,20 After the Lord had spoken he went up into heaven. Sitting is a posture of rest, he had finished his work; and a posture of rule, he took possession of his kingdom. He sat at the right hand of God, which denotes his sovereign dignity and universal power. Whatever God does concerning us, gives to us, or accepts from us, it is by his Son. Now he is glorified with the glory he had before the world. The apostles went forth, and preached every where, far and near. Though the doctrine they preached was spiritual and heavenly, and directly contrary to the spirit and temper of the world; though it met with much opposition, and was wholly destitute of all worldly supports and advantages; yet in a few years the sound went forth unto the ends of the earth. Christ's ministers do not now need to work miracles to prove their message; the Scriptures are proved to be of Divine origin, and this renders those without excuse who reject or neglect them. The effects of the gospel, when faithfully preached, and truly believed, in changing the tempers and characters of mankind, form a constant proof, a miraculous proof, that the gospel is the power of God unto salvation, of all who believe.

View All Discussusion for Mark Chapter 16... 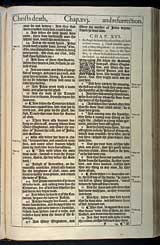