1 And hee began to speake vnto them by parables. A certaine man planted a vineyard, and set an hedge about it, and digged a place for the wine fat, and built a towre, and let it out to husbandmen, and went into a farre countrey.

3 And they caught him, and beat him, and sent him away emptie.

4 And againe, hee sent vnto them another seruant; and at him they cast stones, and wounded him in the head, and sent him away shamefully handled.

5 And againe, he sent another, and him they killed: and many others, beating some, and killing some.

6 Hauing yet therefore one sonne his welbeloued, he sent him also last vnto them, saying, They will reuerence my sonne.

7 But those husbandmen said amongst themselues, This is the heire, come, let vs kill him, and the inheritance shall be ours.

8 And they tooke him, and killed him, and cast him out of the vineyard.

9 What shall therefore the Lord of the vineyard doe? He will come and destroy the husbandmen, and will giue the vineyard vnto others.

10 And haue ye not read this Scripture? The stone which the builders reiected, is become the head of the corner:

11 This was the Lords doing, and it is maruellous in our eies.

12 And they sought to lay hold on him, but feared the people, for they knew that he had spoken the parable against them: and they left him, and went their way.

13 ¶ And they send vnto him certaine of the Pharises, and of the Herodians, to catch him in his words.

14 And when they were come, they say vnto him, Master, we know that thou art true, and carest for no man: for thou regardest not the person of men, but teachest the way of God in truth. Is it lawfull to giue tribute to Cesar, or not?

15 Shall we giue, or shall we not giue? But he knowing their hypocrisie, said vnto them, Why tempt yee mee? Bring me a penny that I may see it.

16 And they brought it: and he saith vnto them, Whose is this image and superscription? And they said vnto him, Cesars.

18 ¶ Then come vnto him the Sadducees, which say there is no resurrection, and they asked him, saying,

19 Master, Moses wrote vnto vs, If a mans brother die, and leaue his wife behind him, and leaue no children, that his brother should take his wife, and raise vp seed vnto his brother.

20 Now there were seuen brethren: and the first tooke a wife, and dying left no seede.

21 And the second tooke her, and died, neither left he any seed, and the third likewise.

22 And the seuen had her, and left no seede: last of all the woman died also.

23 In the resurrection therefore, when they shall rise, whose wife shall she be of them? for the seuen had her to wife.

24 And Iesus answering, said vnto them, Doe ye not therefore erre, because yee know not the scriptures, neither the power of God?

25 For when they shall rise from the dead, they neither marry, nor are giuen in marriage: but are as the Angels which are in heauen.

28 ¶ And one of the Scribes came, and hauing heard them reasoning together, and perceiuing that he had answered them well, asked him which is the first commandement of all.

29 And Iesus answered him, The first of al the commandements is, Heare, O Israel, the Lord our God is one Lord:

31 And the second is like, namely this, Thou shalt loue thy neighbour as thy selfe: there is none other commandement greater then these.

32 And the Scribe said vnto him, Well master, thou hast said the truth: for there is one God, and there is none other but he.

34 And when Iesus saw that he answered discreetly, hee saide vnto him, Thou art not far from the kingdome of God. And no man after that durst aske him any question.

35 ¶ And Iesus answered, and said, while hee taught in the Temple, How say the Scribes that Christ is the sonne of Dauid?

36 For Dauid himselfe said by the holy Ghost, The Lord said to my Lord, Sit thou on my right hand, til I make thine enemies thy footstoole.

37 Dauid therefore himselfe calleth him Lord, and whence is hee then his sonne? And the common people heard him gladly.

38 ¶ And he said vnto them in his doctrine, Beware of the Scribes, which loue to goe in long clothing, and loue salutations in the market places,

40 Which deuoure widowes houses, and for a pretence make long prayers: These shall receiue greater damnation.

41 ¶ And Iesus sate ouer against the treasurie, and beheld how the people cast money into the treasurie: and many that were rich, cast in much.

42 And there came a certaine poore widow, and she threw in two mites, which make a farthing.

43 And he called vnto him his disciples, and saith vnto them, Uerily I say vnto you, that this poore widow hath cast more in, then all they which haue cast into the treasurie.

44 For all they did cast in of their aboundance: but she of her want, did cast in all that she had, euen all her liuing.

The parable of the vineyard and husbandmen. (1-12) Question about tribute. (13-17) Concerning the resurrection. (18-27) The great command of the law. (28-34) Christ the Son and yet the Lord of David. (35-40) The poor widow commended. (41-44)1-12 Christ showed in parables, that he would lay aside the Jewish church. It is sad to think what base usage God's faithful ministers have met with in all ages, from those who have enjoyed the privileges of the church, but have not brought forth fruit answerable. God at length sent his Son, his Well-beloved; and it might be expected that he whom their Master loved, they also should respect and love; but instead of honouring him because he was the Son and Heir, they therefore hated him. But the exaltation of Christ was the Lord's doing; and it is his doing to exalt him in our hearts, and to set up his throne there; and if this be done, it cannot but be marvellous in our eyes. The Scriptures, and faithful preachers, and the coming of Christ in the flesh, call on us to render due praise to God in our lives. Let sinners beware of a proud, carnal spirit; if they revile or despise the preachers of Christ, they would have done so their Master, had they lived when he was upon earth.

13-17 The enemies of Christ would be thought desirous to know their duty, when really they hoped that which soever side he took of the question, they might find occasion to accuse him. Nothing is more likely to insnare the followers of Christ, than bringing them to meddle with disputes about worldly politics. Jesus avoided the snare, by referring to the submission they had already made as a nation; and all that heard him, marvelled at the great wisdom of his answer. Many will praise the words of a sermon, who will not be commanded by the doctrines of it.

18-27 A right knowledge of the Scripture, as the fountain whence all revealed religion now flows, and the foundation on which it is built, is the best preservative against error. Christ put aside the objection of the Sadducees, who were the scoffing infidels of that day, by setting the doctrine of the future state in a true light. The relation between husband and wife, though appointed in the earthly paradise, will not be known in the heavenly one. It is no wonder if we confuse ourselves with foolish errors, when we form our ideas of the world of spirits by the affairs of this world of sense. It is absurd to think that the living God should be the portion and happiness of a man if he is for ever dead; and therefore it is certain that Abraham's soul exists and acts, though now for a time separate from the body. Those that deny the resurrection greatly err, and ought to be told so. Let us seek to pass through this dying world, with a joyful hope of eternal happiness, and of a glorious resurrection.

28-34 Those who sincerely desire to be taught their duty, Christ will guide in judgment, and teach his way. He tells the scribe that the great commandment, which indeed includes all, is, that of loving God with all our hearts. Wherever this is the ruling principle in the soul, there is a disposition to every other duty. Loving God with all our heart, will engage us to every thing by which he will be pleased. The sacrifices only represented the atonements for men's transgressions of the moral law; they were of no power except as they expressed repentance and faith in the promised Saviour, and as they led to moral obedience. And because we have not thus loved God and man, but the very reverse, therefore we are condemned sinners; we need repentance, and we need mercy. Christ approved what the scribe said, and encouraged him. He stood fair for further advance; for this knowledge of the law leads to conviction of sin, to repentance, to discovery of our need of mercy, and understanding the way of justification by Christ.

35-40 When we attend to what the Scriptures declare, as to the person and offices of Christ, we shall be led to confess him as our Lord and God; to obey him as our exalted Redeemer. If the common people hear these things gladly, while the learned and distinguished oppose, the former are happy, and the latter to be pitied. And as sin, disguised with a show of piety, is double iniquity, so its doom will be doubly heavy.

41-44 Let us not forget that Jesus still sees the treasury. He knows how much, and from what motives, men give to his cause. He looks at the heart, and what our views are, in giving alms; and whether we do it as unto the Lord, or only to be seen of men. It is so rare to find any who would not blame this widow, that we cannot expect to find many who will do like to her; and yet our Saviour commends her, therefore we are sure that she did well and wisely. The feeble efforts of the poor to honour their Saviour, will be commended in that day, when the splendid actions of unbelievers will be exposed to contempt.

View All Discussusion for Mark Chapter 12... 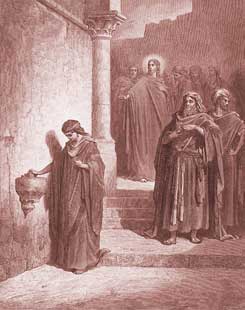 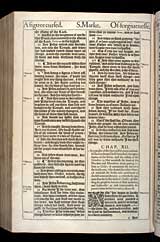