1 And it came to passe on the second Sabbath after the first, that he went thorow the corne fields: and his disciples plucked the eares of corne, and did eate, rubbing them in their hands.

2 And certaine of the Pharisees said vnto them, Why doe yee that which is not lawfull to doe on the Sabbath dayes?

3 And Iesus answering them, said, Haue yee not read so much as this what Dauid did, when himselfe was an hungred, and they which were with him:

4 How he went into the house of God, and did take and eate the Shew bread, and gaue also to them that were with him, which it is not lawful to eate but for the Priests alone?

5 And he said vnto them, That the sonne of man is Lord also of the Sabbath.

6 And it came to passe also on another Sabbath, that he entred into the Synagogue, and taught: and there was a man whose right hand was withered.

7 And the Scribes and Pharisees watched him, whether he would heale on the Sabbath day: that they might find an accusation against him.

8 But he knew their thoughts, and said to the man which had the withered hand, Rise vp, and stand foorth in the mids. And he arose, and stood foorth.

9 Then said Iesus vnto them, I will aske you one thing, Is it lawfull on the Sabbath dayes to doe good, or to doe euill? to saue life, or to destroy it?

10 And looking round about vpon them all, he said vnto the man, Stretch foorth thy hand. And he did so: and his hand was restored whole as the other.

11 And they were filled with madnesse, and communed one with another what they might doe to Iesus.

12 And it came to passe in those dayes, that hee went out into a mountaine to pray, and continued all night in prayer to God.

13 ¶ And when it was day, he called vnto him his disciples: and of them he chose twelue; whom also hee named Apostles:

14 Simon, (whom he also named Peter,) and Andrew his brother: Iames and Iohn, Philip and Bartholomew,

15 Matthew and Thomas, Iames the sonne of Alpheus, and Simon, called Zelotes,

17 ¶ And hee came downe with them, and stood in the plaine, and the company of his disciples, and a great multitude of people, out of all Iudea and Hierusalem, and from the Sea coast of Tyre and Sidon, which came to heare him, and to be healed of their diseases,

18 And they that were vexed with vncleane spirits: and they were healed.

19 And the whole multitude sought to touch him: for there went vertue out of him, and healed them all.

20 ¶ And hee lifted vp his eyes on his disciples, and said, Blessed be yee poore: for yours is the kingdome of God.

22 Blessed are yee when men shall hate you, and when they shall separate you from their company, and shal reproach you, and cast out your name as euill, for the Sonne of mans sake.

23 Reioice yee in that day, and leape for ioy: for behold, your reward is great in heauen for in the like maner did their fathers vnto the Prophets.

24 But woe vnto you that are rich: for yee haue receiued your consolation.

26 Woe vnto you when all men shall speake well of you: for so did their fathers to the false Prophets.

27 ¶ But I say vnto you which heare, Loue your enemies, doe good to them which hate you,

28 Blesse them that curse you, & pray for them which despitefully vse you.

29 And vnto him that smiteth thee on the one cheeke, offer also the other: and him that taketh away thy cloake, forbid not to take thy coat also.

30 Giue to euery man that asketh of thee, and of him that taketh away thy goods, aske them not againe.

31 And as yee would that men should doe to you, doe yee also to them likewise.

32 For if yee loue them which loue you, what thanke haue ye? for sinners also loue those that loue them.

33 And if ye doe good to them which doe good to you, What thanke haue ye? for sinners also doe euen the same.

34 And if ye lend to them of whom ye hope to receiue, What thanke haue ye? for sinners also lend to sinners, to receiue as much againe.

35 But loue yee your enemies, and doe good, and lend, hoping for nothing againe: and your reward shall bee great, and ye shalbe the children of the Highest: for hee is kinde vnto the vnthankfull, and to the euill.

36 Be ye therefore mercifull, as your Father also is mercifull.

38 Giue, and it shall bee giuen vnto you, good measure, preassed downe, and shaken together, and running ouer, shall men giue into your bosome: for with the same measure that ye mete withall, it shall bee measured to you againe.

39 And hee spake a parable vnto them, Can the blinde leade the blinde? Shall they not both fall into the ditch?

40 The disciple is not aboue his master: but euery one that is perfect shalbe as his master.

44 For euery tree is knowen by his owne fruit: for of thornes men doe not gather figs, nor of a bramble bush gather they grapes.

46 ¶ And why call ye mee Lord, Lord, and doe not the things which I say?

47 Whosoeuer commeth to me, and heareth my sayings, and doeth them, I will shew you to whom he is like.

48 He is like a man which built an house, and digged deepe, and layd the foundation on a rocke. And when the flood arose, the streame beat vehemently vpon that house, and could not shake it: for it was founded vpon a rocke.

49 But he that heareth, and doeth not, is like a man that without a foundation built an house vpon the earth: against which the streame did beate vehemently, and immediatly it fell, and the ruine of that house was great.

The disciples pluck corn on the sabbath. (1-5) Works of mercy suitable to the sabbath day. (6-11) The apostles chosen. (12-19) Blessings and woes declared. (20-26) Christ exhorts to mercy. (27-36) And to justice and sincerity. (37-49)1-5 Christ justifies his disciples in a work of necessity for themselves on the sabbath day, and that was plucking the ears of corn when they were hungry. But we must take heed that we mistake not this liberty for leave to commit sin. Christ will have us to know and remember that it is his day, therefore to be spent in his service, and to his honour.

6-11 Christ was neither ashamed nor afraid to own the purposes of his grace. He healed the poor man, though he knew that his enemies would take advantage against him for it. Let us not be drawn either from our duty or from our usefulness by any opposition. We may well be amazed, that the sons of men should be so wicked.

12-19 We often think one half hour a great deal to spend in meditation and secret prayer, but Christ was whole nights engaged in these duties. In serving God, our great care should be not to lose time, but to make the end of one good duty the beginning of another. The twelve apostles are here named; never were men so privileged, yet one of them had a devil, and proved a traitor. Those who have not faithful preaching near them, had better travel far than be without it. It is indeed worth while to go a great way to hear the word of Christ, and to go out of the way of other business for it. They came to be cured by him, and he healed them. There is a fulness of grace in Christ, and healing virtue in him, ready to go out from him, that is enough for all, enough for each. Men regard the diseases of the body as greater evils than those of their souls; but the Scripture teaches us differently.

20-26 Here begins a discourse of Christ, most of which is also found in #Mt 5; 7|. But some think that this was preached at another time and place. All believers that take the precepts of the gospel to themselves, and live by them, may take the promises of the gospel to themselves, and live upon them. Woes are denounced against prosperous sinners as miserable people, though the world envies them. Those are blessed indeed whom Christ blesses, but those must be dreadfully miserable who fall under his woe and curse! What a vast advantage will the saint have over the sinner in the other world! and what a wide difference will there be in their rewards, how much soever the sinner may prosper, and the saint be afflicted here!

27-36 These are hard lessons to flesh and blood. But if we are thoroughly grounded in the faith of Christ's love, this will make his commands easy to us. Every one that comes to him for washing in his blood, and knows the greatness of the mercy and the love there is in him, can say, in truth and sincerity, Lord, what wilt thou have me to do? Let us then aim to be merciful, even according to the mercy of our heavenly Father to us.

37-49 All these sayings Christ often used; it was easy to apply them. We ought to be very careful when we blame others; for we need allowance ourselves. If we are of a giving and a forgiving spirit, we shall ourselves reap the benefit. Though full and exact returns are made in another world, not in this world, yet Providence does what should encourage us in doing good. Those who follow the multitude to do evil, follow in the broad way that leads to destruction. The tree is known by its fruits; may the word of Christ be so grafted in our hearts, that we may be fruitful in every good word and work. And what the mouth commonly speaks, generally agrees with what is most in the heart. Those only make sure work for their souls and eternity, and take the course that will profit in a trying time, who think, speak, and act according to the words of Christ. Those who take pains in religion, found their hope upon Christ, who is the Rock of Ages, and other foundation can no man lay. In death and judgment they are safe, being kept by the power of Christ through faith unto salvation, and they shall never perish.

View All Discussusion for Luke Chapter 6... 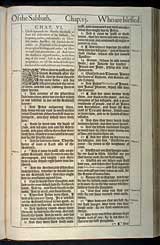