1 And he spake a parable vnto them, to this ende, that men ought alwayes to pray, and not to faint,

2 Saying, There was in a city a Iudge, which feared not God neither regarded man.

3 And there was a widowe in that citie, and she came vnto him, saying, Auenge me of mine aduersarie:

4 And hee would not for a while. But afterward he said within himselfe, Though I feare not God, nor regard man,

5 Yet because this widow troubleth me, I will auenge her, lest by her continuall comming, she wearie me.

6 And the Lord said, Heare what the vniust iudge saith.

7 And shall not God auenge his owne elect, which crie day and night vnto him, thogh he beare long with them?

8 I tell you that he wil auenge them speedily. Neuerthelesse, when the Son of man commeth, shall hee find faith on the earth?

9 And he spake this parable vnto certaine which trusted in themselues that they were righteous, & despised other:

10 Two men went vp into the Temple to pray, the one a Pharisee, and the other a Publicane.

11 The Pharisee stood and prayed thus with himselfe, God, I thank thee, that I am not as other men are, extortioners, vniust, adulterers, or euen as this Publicane.

12 I fast twise in the weeke, I giue tithes of all that I possesse.

13 And the Publicane standing afarre off, would not lift vp so much as his eyes vnto heauen: but smote vpon his breast, saying, God me mercifull to mee a sinner.

15 And they brought vnto him also infants, that he would touch them: but when his disciples saw it, they rebuked them.

16 But Iesus called them vnto him, and said, Suffer litle children to come vnto me, and forbid them not: for of such is the kingdome of God.

17 Uerely I say vnto you, whosoeuer shall not receiue the kingdome of God as a litle child, shal in no wise enter therein.

18 And a certaine ruler asked him, saying, Good master, what shall I doe to inherit eternall life?

19 And Iesus said vnto him, Why callest thou mee good? None is good saue one, that is God.

20 Thou knowest the commaundements, Doe not commit adulterie, Doe not kill, Doe not steale, Doe not beare false witnesse, Honour thy father and thy mother.

21 And he said, All these haue I kept from my youth vp.

22 Now when Iesus heard these things, hee said vnto him, Yet lackest thou one thing: Sell all that thou hast, and distribute vnto the poore, and thou shalt haue treasure in heauen, and come, follow me.

24 And when Iesus saw that hee was very sorrowfull, he said, How hardly shal they that haue riches, enter into the kingdome of God?

25 For it is easier for a camel to goe thorow a needles eye, then for a rich man to enter into the kingdom of God.

26 And they that heard it, said, Who then can be saued?

28 Then Peter said, Loe, we haue left all, and followed thee.

29 And he said vnto them, Uerily, I say vnto you, there is no man that hath left house, or parents, or brethren, or wife, or children, for the kingdome of Gods sake,

30 Who shall not receiue manifold more in this present time, and in the world to come life euerlasting.

31 ¶ Then hee tooke vnto him the twelue, and said vnto them, Behold, we goe vp to Hierusalem, and al things that are written by the Prophets concerning the sonne of man, shall be accomplished.

32 For he shall be deliuered vnto the Gentiles, and shall be mocked, and spitefully intreated, and spitted on:

33 And they shall scourge him, and put him to death, and the third day he shall rise againe.

34 And they vnderstood none of these things: and this saying was hid from them, neither knew they the things which were spoken.

35 ¶ And it came to passe, that as he was come nigh vnto Iericho, a certaine blinde man sate by the way side, begging,

36 And hearing the multitude passe by, he asked what it meant.

37 And they tolde him that Iesus of Nazareth passeth by.

38 And he cried, saying, Iesus thou sonne of Dauid, haue mercie on me.

39 And they which went before, rebuked him, that hee should holde his peace: but hee cried so much the more, Thou Sonne of Dauid, haue mercie on mee.

40 And Iesus stood and commanded him to be brought vnto him: and when he was come neere, he asked him,

41 Saying, What wilt thou that I shall doe vnto thee? And he said, Lord, that I may receiue my sight.

42 And Iesus said vnto him, Receiue thy sight, thy faith hath saued thee.

43 And immediately he receiued his sight, and followed him, glorifying God: and all the people when they saw it, gaue praise vnto God.

The parable of the importunate widow. (1-8) The Pharisee and the publican. (9-14) Children brought to Christ. (15-17) The ruler hindered by his riches. (18-30) Christ foreshows his death. (31-34) A blind man restored to sight. (35-43)1-8 All God's people are praying people. Here earnest steadiness in prayer for spiritual mercies is taught. The widow's earnestness prevailed even with the unjust judge: she might fear lest it should set him more against her; but our earnest prayer is pleasing to our God. Even to the end there will still be ground for the same complaint of weakness of faith.

9-14 This parable was to convince some who trusted in themselves that they were righteous, and despised others. God sees with what disposition and design we come to him in holy ordinances. What the Pharisee said, shows that he trusted to himself that he was righteous. We may suppose he was free from gross and scandalous sins. All this was very well and commendable. Miserable is the condition of those who come short of the righteousness of this Pharisee, yet he was not accepted; and why not? He went up to the temple to pray, but was full of himself and his own goodness; the favour and grace of God he did not think worth asking. Let us beware of presenting proud devotions to the Lord, and of despising others. The publican's address to God was full of humility, and of repentance for sin, and desire toward God. His prayer was short, but to the purpose; God be merciful to me a sinner. Blessed be God, that we have this short prayer upon record, as an answered prayer; and that we are sure that he who prayed it, went to his house justified; for so shall we be, if we pray it, as he did, through Jesus Christ. He owned himself a sinner by nature, by practice, guilty before God. He had no dependence but upon the mercy of God; upon that alone he relied. And God's glory is to resist the proud, and give grace to the humble. Justification is of God in Christ; therefore the self-condemned, and not the self-righteous, are justified before God.

15-17 None are too little, too young, to be brought to Christ, who knows how to show kindness to those not capable of doing service to him. It is the mind of Christ, that little children should be brought to him. The promise is to us, and to our seed; therefore He will bid them welcome to him with us. And we must receive his kingdom as children, not by purchase, and must call it our Father's gift.

18-30 Many have a great deal in them very commendable, yet perish for lack of some one thing; so this ruler could not bear Christ's terms, which would part between him and his estate. Many who are loth to leave Christ, yet do leave him. After a long struggle between their convictions and their corruptions, their corruptions carry the day. They are very sorry that they cannot serve both; but if one must be quitted, it shall be their God, not their wordly gain. Their boasted obedience will be found mere outside show; the love of the world in some form or other lies at the root. Men are apt to speak too much of what they have left and lost, of what they have done and suffered for Christ, as Peter did. But we should rather be ashamed that there has been any regret or difficulty in doing it.

31-34 The Spirit of Christ, in the Old Testament prophets, testified beforehand his sufferings, and the glory that should follow, #1Pe 1:11|. The disciples' prejudices were so strong, that they would not understand these things literally. They were so intent upon the prophecies which spake of Christ's glory, that they overlooked those which spake of his sufferings. People run into mistakes, because they read their Bibles by halves, and are only for the smooth things. We are as backward to learn the proper lessons from the sufferings, crucifixion, and resurrection of Christ, as the disciples were to what he told them as to those events; and for the same reason; self-love, and a desire of worldly objects, close our understandings.

35-43 This poor blind man sat by the wayside, begging. He was not only blind, but poor, the fitter emblem of the world of mankind which Christ came to heal and save. The prayer of faith, guided by Christ's encouraging promises, and grounded on them, shall not be in vain. The grace of Christ ought to be thankfully acknowledged, to the glory of God. It is for the glory of God if we follow Jesus, as those will do whose eyes are opened. We must praise God for his mercies to others, as well as for mercies to ourselves. Would we rightly understand these things, we must come to Christ, like the blind man, earnestly beseeching him to open our eyes, and to show us clearly the excellence of his precepts, and the value of his salvation.

View All Discussusion for Luke Chapter 18... 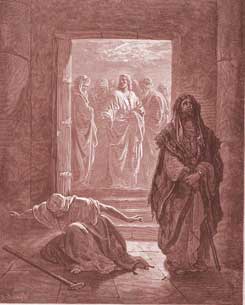 The Pharisee and the Publican 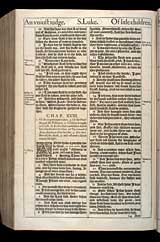