1 Then said he vnto the disciples, It is impossible but that offences will come, but wo vnto him through whom they come.

2 It were better for him that a milstone were hanged about his necke, and he cast into the Sea, then that he should offend one of these little ones.

3 ¶ Take heed to your selues: If thy brother trespasse against thee, rebuke him, and if he repent, forgiue him.

5 And the Apostles said vnto the Lord, Increase our faith.

6 And the Lord said, If yee had faith as a graine of mustard seede, yee might say vnto this Sycamine tree, Be thou plucked vp by the root, and be thou planted in the sea, & it should obey you.

7 But which of you hauing a seruant plowing, or feeding cattell, will say vnto him by & by when he is come from the field, Goe and sit downe to meate?

8 And will not rather say vnto him, Make ready wherewith I may suppe, and gird thy selfe, and serue me, till I haue eaten and drunken: and afterward thou shalt eate and drinke.

9 Doeth he thanke that seruant, because hee did the things that were commanded him? I trow not.

10 So likewise ye, when ye shal haue done all those things which are commanded you, say, Wee are vnprofitable seruants: Wee haue done that which was our duety to doe.

11 ¶ And it came to passe, as he went to Hierusalem, that hee passed thorow the mids of Samaria and Galile.

12 And as he entred into a certaine village, there met him tenne men that were lepers, which stood afarre off.

13 And they lifted vp their voices, and said, Iesus master haue mercy on vs.

14 And when he saw them, hee said vnto them, Goe shew your selues vnto the Priests. And it came to passe, that as they went, they were cleansed.

15 And one of them when hee sawe that he was healed, turned backe, and with a loud voice glorified God,

16 And fell downe on his face at his feet, giuing him thanks: and he was a Samaritane.

17 And Iesus answering, said, Were there not ten cleansed, but where are the nine?

18 There are not found that returned to giue glory to God, saue this stranger.

19 And he said vnto him, Arise, go thy way, thy faith hath made thee whole.

21 Neither shall they say, Loe here, or loe there: for behold, the kingdome of God is within you.

22 And hee said vnto the disciples, The dayes will come, when ye shall desire to see one of the dayes of the Sonne of man, and ye shall not see it.

23 And they shall say to you, See here, or see there: Goe not after them, nor follow them.

25 But first must hee suffer many things, & be reiected of this generation.

27 They did eate, they dranke, they married wiues, they were giuen in mariage, vntill the day that Noe entred into the arke: and the flood came, and destroyed them all.

28 Likewise also as it was in the dayes of Lot, they did eat, they dranke, they bought, they sold, they planted, they builded:

29 But the same day that Lot went out of Sodome, it rained fire and brimstone from heauen, & destroyed them all:

30 Euen thus shall it bee in the day when the Sonne of man is reuealed.

31 In that day he which shall be vpon the house top, and his stuffe in the house, let him not come downe to take it away: and he that is in the field, let him likewise not returne backe.

34 I tell you, in that night there shall be two men in one bed; the one shal be taken, the other shall be left.

35 Two women shall bee grinding together; the one shall be taken, and the other left.

36 Two men shall be in the field; the one shall be taken, and the other left.

37 And they answered, and said vnto him, Where, Lord? And he said vnto them, Wheresoeuer the body is, thither will the Eagles be gathered together.

To avoid offences, To pray for increase of faith, Humility taught.11-19. Ten lepers cleansed. (1-10) Christ's kingdom. (20-37)1-10 It is no abatement of their guilt by whom an offence comes, nor will it lessen their punishment that offences will come. Faith in God's pardoning mercy, will enable us to get over the greatest difficulties in the way of forgiving our brethren. As with God nothing is impossible, so all things are possible to him that can believe. Our Lord showed his disciples their need of deep humility. The Lord has such a property in every creature, as no man can have in another; he cannot be in debt to them for their services, nor do they deserve any return from him.

11-19 A sense of our spiritual leprosy should make us very humble whenever we draw near to Christ. It is enough to refer ourselves to the compassions of Christ, for they fail not. We may look for God to meet us with mercy, when we are found in the way of obedience. Only one of those who were healed returned to give thanks. It becomes us, like him, to be very humble in thanksgivings, as well as in prayers. Christ noticed the one who thus distinguished himself, he was a Samaritan. The others only got the outward cure, he alone got the spiritual blessing.

20-37 The kingdom of God was among the Jews, or rather within some of them. It was a spiritual kingdom, set up in the heart by the power of Divine grace. Observe how it had been with sinners formerly, and in what state the judgments of God, which they had been warned of, found them. Here is shown what a dreadful surprise this destruction will be to the secure and sensual. Thus shall it be in the day when the Son of man is revealed. When Christ came to destroy the Jewish nation by the Roman armies, that nation was found in such a state of false security as is here spoken of. In like manner, when Jesus Christ shall come to judge the world, sinners will be found altogether regardless; for in like manner the sinners of every age go on securely in their evil ways, and remember not their latter end. But wherever the wicked are, who are marked for eternal ruin, they shall be found by the judgments of God.

View All Discussusion for Luke Chapter 17... 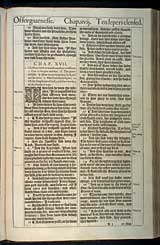