1 And hee said also vnto his disciples, There was a certaine rich man which had a Steward, and the same was accused vnto him that he had wasted his goods.

2 And hee called him, and said vnto him, How is it that I heare this of thee? Giue an accompt of thy stewardship: for thou mayest bee no longer Steward.

3 Then the Steward said within himselfe, What shall I doe, for my lord taketh away from mee the Stewardship? I cannot digge, to begge I am ashamed.

4 I am resolued what to doe, that when I am put out of the stewardship, they may receiue me into their houses.

5 So hee called euery one of his lords detters vnto him, and said vnto the first, How much owest thou vnto my lord?

6 And hee said, An hundred measures of oyle. And hee saide vnto him, Take thy bill, and sit downe quickly, and write fiftie.

7 Then said hee to another, And how much owest thou? And hee said, An hundred measures of wheat. And hee saide vnto him, Take thy bill and write fourescore.

9 And I say vnto you, Make to your selues friends of the Mammon of vnrighteousnesse, that when ye faile, they may receiue you into euerlasting habitations.

11 If therefore yee haue not bene faithfull in the vnrighteous Mammon, who will commit to your trust the true riches?

14 And the Pharisees also who were couetous, heard all these things: and they derided him.

15 And he said vnto them, Ye are they which iustifie your selues before men, but God knoweth your hearts: for that which is highly esteemed amongst men, is abomination in the sight of God.

16 The law and the Prophets were vntill Iohn: since that time the kingdome of God is preached, and euery man preasseth into it.

17 And it is easier for heauen and earth to passe, then one title of the law to faile.

19 ¶ There was a certaine rich man, which was clothed in purple and fine linnen, and fared sumptuously euery day.

20 And there was a certaine begger named Lazarus, which was layde at his gate full of sores,

21 And desiring to bee fed with the crummes which fel from the rich mans table: moreouer the dogges came and licked his sores.

22 And it came to passe that the begger died, and was caried by the Angels into Abrahams bosome: the rich man also died, and was buried.

23 And in hell he lift vp his eyes being in torments, and seeth Abraham afarre off, and Lazarus in his bosome:

24 And he cried, and said, Father Abraham, haue mercy on mee, and send Lazarus, that he may dip the tip of his finger in water, and coole my tongue, for I am tormented in this flame.

25 But Abraham saide, Sonne, remember that thou in thy life-time receiuedst thy good things, and likewise Lazarus euill things, but now he is comforted, and thou art tormented.

26 And besides all this, betweene vs and you there is a great gulfe fixed, so that they which would passe from hence to you, cannot, neither can they passe to vs, that would come from thence.

27 Then he said, I pray thee therefore father, that thou wouldest send him to my fathers house:

28 For I haue fiue brethren, that he may testifie vnto them, lest they also come into this place of torment.

29 Abraham saith vnto him, They haue Moses and the Prophets, let them heare them.

30 And hee said, Nay, father Abraham: but if one went vnto them from the dead, they will repent.

31 And hee said vnto him, If they heare not Moses and the Prophets, neither will they be perswaded, though one rose from the dead.

The parable of the unjust steward. (1-12) Christ reproves the hypocrisy of the covetous Pharisees. (13-18) The rich man and Lazarus. (19-31)1-12 Whatever we have, the property of it is God's; we have only the use of it, according to the direction of our great Lord, and for his honour. This steward wasted his lord's goods. And we are all liable to the same charge; we have not made due improvement of what God has trusted us with. The steward cannot deny it; he must make up his accounts, and be gone. This may teach us that death will come, and deprive us of the opportunities we now have. The steward will make friends of his lord's debtors or tenants, by striking off a considerable part of their debt to his lord. The lord referred to in this parable commended not the fraud, but the policy of the steward. In that respect alone is it so noticed. Worldly men, in the choice of their object, are foolish; but in their activity, and perseverance, they are often wiser than believers. The unjust steward is not set before us as an example in cheating his master, or to justify any dishonesty, but to point out the careful ways of worldly men. It would be well if the children of light would learn wisdom from the men of the world, and would as earnestly pursue their better object. The true riches signify spiritual blessings; and if a man spends upon himself, or hoards up what God has trusted to him, as to outward things, what evidence can he have, that he is an heir of God through Christ? The riches of this world are deceitful and uncertain. Let us be convinced that those are truly rich, and very rich, who are rich in faith, and rich toward God, rich in Christ, in the promises; let us then lay up our treasure in heaven, and expect our portion from thence.

13-18 To this parable our Lord added a solemn warning. Ye cannot serve God and the world, so divided are the two interests. When our Lord spoke thus, the covetous Pharisees treated his instructions with contempt. But he warned them, that what they contended for as the law, was a wresting of its meaning: this our Lord showed in a case respecting divorce. There are many covetous sticklers for the forms of godliness, who are the bitterest enemies to its power, and try to set others against the truth.

19-31 Here the spiritual things are represented, in a description of the different state of good and bad, in this world and in the other. We are not told that the rich man got his estate by fraud, or oppression; but Christ shows, that a man may have a great deal of the wealth, pomp, and pleasure of this world, yet perish for ever under God's wrath and curse. The sin of this rich man was his providing for himself only. Here is a godly man, and one that will hereafter be happy for ever, in the depth of adversity and distress. It is often the lot of some of the dearest of God's saints and servants to be greatly afflicted in this world. We are not told that the rich man did him any harm, but we do not find that he had any care for him. Here is the different condition of this godly poor man, and this wicked rich man, at and after death. The rich man in hell lifted up his eyes, being in torment. It is not probable that there are discourses between glorified saints and damned sinners, but this dialogue shows the hopeless misery and fruitless desires, to which condemned spirits are brought. There is a day coming, when those who now hate and despise the people of God, would gladly receive kindness from them. But the damned in hell shall not have the least abatement of their torment. Sinners are now called upon to remember; but they do not, they will not, they find ways to avoid it. As wicked people have good things only in this life, and at death are for ever separated from all good, so godly people have evil things only in this life, and at death they are for ever put from them. In this world, blessed be God, there is no gulf between a state of nature and grace, we may pass from sin to God; but if we die in our sins, there is no coming out. The rich man had five brethren, and would have them stopped in their sinful course; their coming to that place of torment, would make his misery the worse, who had helped to show them the way thither. How many would now desire to recall or to undo what they have written or done! Those who would make the rich man's praying to Abraham justify praying to saints departed, go far to seek for proofs, when the mistake of a damned sinner is all they can find for an example. And surely there is no encouragement to follow the example, when all his prayers were made in vain. A messenger from the dead could say no more than what is said in the Scriptures. The same strength of corruption that breaks through the convictions of the written word, would triumph over a witness from the dead. Let us seek to the law and to the testimony, #Isa 8:19,20|, for that is the sure word of prophecy, upon which we may rest, #2Pe 1:19|. Circumstances in every age show that no terrors, or arguments, can give true repentance without the special grace of God renewing the sinner's heart.

View All Discussusion for Luke Chapter 16... 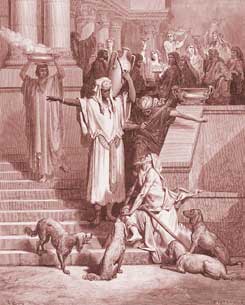 Lazarus at the Rich Man's House 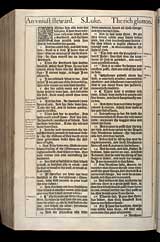