1 Then drew neere vnto him all the Publicanes and sinners, for to heare him.

2 And the Pharises and Scribes murmured, murmured, saying, This man receiueth sinners, and eateth with them.

3 ¶ And he spake this parable vnto them, saying,

4 What man of you hauing an hundred sheepe, if he loose one of them, doth not leaue the ninety and nine in the wildernesse, and goe after that which is lost, vntill he find it?

5 And when he hath found it, hee layeth it on his shoulders, reioycing.

6 And when he commeth home, he calleth together his friends, and neighbours, saying vnto them, Reioyce with me, for I haue found my sheepe which was lost.

7 I say vnto you, that likewise ioy shall be in heauen ouer one sinner that repenteth, more then ouer ninety and nine iust persons, which need no repentance.

8 ¶ Either what woman hauing ten pieces of siluer, if she lose one piece, doth not light a candle, and sweepe the house, and seeke diligently till shee find it?

9 And when she hath found it, she calleth her friends and her neighbours together, saying, Reioyce with me, for I haue found þe piece which I had lost.

10 Likewise I say vnto you, there is ioy in the presence of the Angels of God, ouer one sinner that repenteth.

11 ¶ And hee said, A certaine man had two sonnes:

12 And the yonger of them said to his father, Father, giue me the portion of goods that falleth to me. And he diuided vnto them his liuing.

13 And not many dayes after, the yonger sonne gathered al together, and tooke his iourney into a farre countrey, and there wasted his substance with riotous liuing.

14 And when he had spent all, there arose a mighty famine in that land, and he beganne to be in want.

15 And he went and ioyned himselfe to a citizen of that countrey, and he sent him into his fields to feed swine.

16 And he would faine haue filled his belly with the huskes that the swine did eate: & no man gaue vnto him.

17 And when he came to himselfe, he said, How many hired seruants of my fathers haue bread inough and to spare, and I perish with hunger?

18 I will arise and goe to my father, and will say vnto him, Father, I haue sinned against heauen and before thee.

19 And am no more worthy to be called thy sonne: make me as one of thy hired seruants.

20 And he arose and came to his father. But when he was yet a great way off, his father saw him, and had compassion, and ranne, and fell on his necke, and kissed him.

21 And the sonne said vnto him, Father, I haue sinned against heauen, and in thy sight, and am no more worthy to be called thy sonne.

22 But the father saide to his seruants, Bring foorth the best robe, and put it on him, and put a ring on his hand, and shooes on his feete.

23 And bring hither the fatted calfe, and kill it, and let vs eate and be merrie.

24 For this my sonne was dead, and is aliue againe; hee was lost, & is found. And they began to be merie.

25 Now his elder sonne was in the field, and as he came and drew nigh to the house, he heard musicke & dauncing,

26 And he called one of the seruants, and asked what these things meant.

27 And he said vnto him, Thy brother is come, and thy father hath killed the fatted calfe, because he hath receiued him safe and sound.

28 And he was angry, and would not goe in: therefore came his father out, and intreated him.

29 And he answering said to his father, Loe, these many yeeres doe I serue thee, neither transgressed I at any time thy commandement, and yet thou neuer gauest mee a kid, that I might make merry with my friends:

30 But as soone as this thy sonne was come, which hath deuoured thy liuing with harlots, thou hast killed for him the fatted calfe.

31 And he said vnto him, Sonne, thou art euer with me, and all that I haue is thine.

32 It was meete that we should make merry, and be glad: for this thy brother was dead, and is aliue againe: and was lost, and is found.

Parables of the lost sheep, and the piece of silver. (1-10) The prodigal son, his wickedness and distress. (11-16) His repentance and pardon. (17-24) The elder brother offended. (25-32)1-10 The parable of the lost sheep is very applicable to the great work of man's redemption. The lost sheep represents the sinner as departed from God, and exposed to certain ruin if not brought back to him, yet not desirous to return. Christ is earnest in bringing sinners home. In the parable of the lost piece of silver, that which is lost, is one piece, of small value compared with the rest. Yet the woman seeks diligently till she finds it. This represents the various means and methods God makes use of to bring lost souls home to himself, and the Saviour's joy on their return to him. How careful then should we be that our repentance is unto salvation!

11-16 The parable of the prodigal son shows the nature of repentance, and the Lord's readiness to welcome and bless all who return to him. It fully sets forth the riches of gospel grace; and it has been, and will be, while the world stands, of unspeakable use to poor sinners, to direct and to encourage them in repenting and returning to God. It is bad, and the beginning of worse, when men look upon God's gifts as debts due to them. The great folly of sinners, and that which ruins them, is, being content in their life-time to receive their good things. Our first parents ruined themselves and all their race, by a foolish ambition to be independent, and this is at the bottom of sinners' persisting in their sin. We may all discern some features of our own characters in that of the prodigal son. A sinful state is of departure and distance from God. A sinful state is a spending state: wilful sinners misemploy their thoughts and the powers of their souls, mispend their time and all their opportunities. A sinful state is a wanting state. Sinners want necessaries for their souls; they have neither food nor raiment for them, nor any provision for hereafter. A sinful state is a vile, slavish state. The business of the devil's servants is to make provision for the flesh, to fulfil the lusts thereof, and that is no better than feeding swine. A sinful state is a state constant discontent. The wealth of the world and the pleasures of the senses will not even satisfy our bodies; but what are they to precious souls! A sinful state is a state which cannot look for relief from any creature. In vain do we cry to the world and to the flesh; they have that which will poison a soul, but have nothing to give which will feed and nourish it. A sinful state is a state of death. A sinner is dead in trespasses and sins, destitute of spiritual life. A sinful state is a lost state. Souls that are separated from God, if his mercy prevent not, will soon be lost for ever. The prodigal's wretched state, only faintly shadows forth the awful ruin of man by sin. Yet how few are sensible of their own state and character!

17-24 Having viewed the prodigal in his abject state of misery, we are next to consider his recovery from it. This begins by his coming to himself. That is a turning point in the sinner's conversion. The Lord opens his eyes, and convinces him of sin; then he views himself and every object, in a different light from what he did before. Thus the convinced sinner perceives that the meanest servant of God is happier than he is. To look unto God as a Father, and our Father, will be of great use in our repentance and return to him. The prodigal arose, nor stopped till he reached his home. Thus the repenting sinner resolutely quits the bondage of Satan and his lusts, and returns to God by prayer, notwithstanding fears and discouragements. The Lord meets him with unexpected tokens of his forgiving love. Again; the reception of the humbled sinner is like that of the prodigal. He is clothed in the robe of the Redeemer's righteousness, made partaker of the Spirit of adoption, prepared by peace of conscience and gospel grace to walk in the ways of holiness, and feasted with Divine consolations. Principles of grace and holiness are wrought in him, to do, as well as to will.

25-32 In the latter part of this parable we have the character of the Pharisees, though not of them alone. It sets forth the kindness of the Lord, and the proud manner in which his gracious kindness is often received. The Jews, in general, showed the same spirit towards the converted Gentiles; and numbers in every age object to the gospel and its preachers, on the same ground. What must that temper be, which stirs up a man to despise and abhor those for whom the Saviour shed his precious blood, who are objects of the Father's choice, and temples of the Holy Ghost! This springs from pride, self-preference, and ignorance of a man's own heart. The mercy and grace of our God in Christ, shine almost as bright in his tender and gentle bearing with peevish saints, as his receiving prodigal sinners upon their repentance. It is the unspeakable happiness of all the children of God, who keep close to their Father's house, that they are, and shall be ever with him. Happy will it be for those who thankfully accept Christ's invitation.

View All Discussusion for Luke Chapter 15... 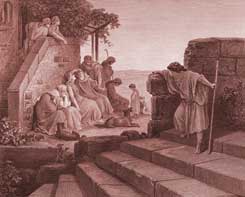 Return of the Prodigal Son 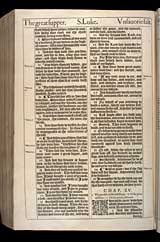