1 And it came to passe, as he went into the house of one of the chief Pharises to eat bread on þe Sabbath day, that they watched him.

2 And behold, there was a certaine man before him, which had the dropsie.

3 And Iesus answering, spake vnto the Lawyers and Pharises, saying, Is it lawfull to heale on the Sabbath day?

4 And they held their peace. And he tooke him, and healed him, & let him go,

5 And answered them, saying, Which of you shall haue an asse or an oxe fallen into a pit, and will not straightway pull him out on the Sabbath day?

6 And they could not answere him againe to these things.

7 ¶ And he put foorth a parable to those which were bidden, when he marked howe they chose out the chiefe roumes, saying vnto them,

8 When thou art bidden of any man to a wedding, sit not downe in the highest roume: lest a more honourable man then thou be bidden of him,

9 And hee that bade thee and him, come, and say to thee, Giue this man place: and thou begin with shame to take the lowest roume.

10 But when thou art bidden, goe and sit downe in the lowest roume, that when he that bade thee commeth, hee may say vnto thee, Friend, goe vp higher: then shalt thou haue worship in the presence of them that sit at meate with thee.

12 ¶ Then said hee also to him that bade him, When thou makest a dinner or a supper, call not thy friends, nor thy brethren, neither thy kinsemen, nor thy rich neighbours, lest they also bid thee againe, and a recompence be made thee.

13 But when thou makest a feast, call the poore, the maimed, the lame, the blinde,

15 ¶ And when one of them that sate at meate with him, heard these things, he said vnto him, Blessed is hee that shall eate bread in the kingdom of God.

16 Then said hee vnto him, A certaine man made a great supper, and bade many:

17 And sent his seruant at supper time, to say to them that were bidden, Come, for all things are now ready.

18 And they all with one consent began to make excuse: The first said vnto him, I haue bought a piece of ground, and I must needs goe and see it: I pray thee haue me excused.

19 And another said, I haue bought fiue yoke of oxen, and I goe to prooue them: I pray thee haue me excused.

20 And another said, I haue maried a wife: and therefore I cannot come.

21 So that seruant came, and shewed his lord these things. Then the master of the house being angry, sayde to his seruant, Goe out quickely into the streetes and lanes of the city, and bring in hither the poore, and the maimed, and the halt, and the blinde.

22 And the seruant said, Lord, it is done as thou hast commanded, and yet there is roume.

23 And the Lord said vnto the seruant, Goe out into the high wayes and hedges, and compell them to come in, that my house may be filled.

24 For I say vnto you, that none of those men which were bidden, shall taste of my supper.

25 ¶ And there went great multitudes with him: and hee turned, and said vnto them,

26 If any man come to me, and hate not his father, and mother, and wife, and children, and brethren, and sisters, yea and his owne life also, hee cannot be my disciple.

27 And whosoeuer doeth not beare his crosse, and come after me, cannot be my disciple.

28 For which of you intending to build a towre, sitteth not downe first, and counteth the cost, whether he haue sufficient to finish it?

29 Lest haply after hee hath laide the foundation, and is not able to finish it, all that behold it, begin to mock him,

30 Saying, This man beganne to build, and was not able to finish.

31 Or what king going to make war against another king, sitteth not downe first, and consulteth whether he be able with ten thousand, to meete him that commeth against him with twentie thousand?

32 Or else, while the other is yet a great way off, hee sendeth an ambassage, and desireth conditions of peace.

33 So likewise, whosoeuer he be of you, that forsaketh not all that he hath, he cannot be my disciple.

34 ¶ Salt is good: but if the salt haue lost his sauour, wherewith shall it be seasoned?

35 It is neither fit for the land, nor yet for the dunghill: but men cast it out. He that hath eares to heare, let him heare.

Christ heals a man on the sabbath. (1-6) He teaches humility. (7-14) Parable of the great supper. (15-24) The necessity of consideration and self-denial. (25-35)1-6 This Pharisee, as well as others, seems to have had an ill design in entertaining Jesus at his house. But our Lord would not be hindered from healing a man, though he knew a clamour would be raised at his doing it on the sabbath. It requires care to understand the proper connexion between piety and charity in observing the sabbath, and the distinction between works of real necessity and habits of self-indulgence. Wisdom from above, teaches patient perseverance in well-doing.

7-14 Even in the common actions of life, Christ marks what we do, not only in our religious assemblies, but at our tables. We see in many cases, that a man's pride will bring him low, and before honour is humility. Our Saviour here teaches, that works of charity are better than works of show. But our Lord did not mean that a proud and unbelieving liberality should be rewarded, but that his precept of doing good to the poor and afflicted should be observed from love to him.

15-24 In this parable observe the free grace and mercy of God shining in the gospel of Christ, which will be food and a feast for the soul of a man that knows its own wants and miseries. All found some pretence to put off their attendance. This reproves the Jewish nation for their neglect of the offers of Christ's grace. It shows also the backwardness there is to close with the gospel call. The want of gratitude in those who slight gospel offers, and the contempt put upon the God of heaven thereby, justly provoke him. The apostles were to turn to the Gentiles, when the Jews refused the offer; and with them the church was filled. The provision made for precious souls in the gospel of Christ, has not been made in vain; for if some reject, others will thankfully accept the offer. The very poor and low in the world, shall be as welcome to Christ as the rich and great; and many times the gospel has the greatest success among those that labour under worldly disadvantages and bodily infirmities. Christ's house shall at last be filled; it will be so when the number of the elect is completed.

25-35 Though the disciples of Christ are not all crucified, yet they all bear their cross, and must bear it in the way of duty. Jesus bids them count upon it, and then consider of it. Our Saviour explains this by two similitudes; the former showing that we must consider the expenses of our religion; the latter, that we must consider the perils of it. Sit down and count the cost; consider it will cost the mortifying of sin, even the most beloved lusts. The proudest and most daring sinner cannot stand against God, for who knows the power of his anger? It is our interest to seek peace with him, and we need not send to ask conditions of peace, they are offered to us, and are highly to our advantage. In some way a disciple of Christ will be put to the trial. May we seek to be disciples indeed, and be careful not to grow slack in our profession, or afraid of the cross; that we may be the good salt of the earth, to season those around us with the savour of Christ.

View All Discussusion for Luke Chapter 14... 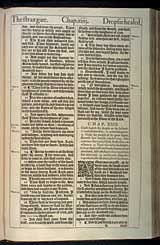