1 After these things, the Lord appointed other seuenty also, and sent them two and two before his face, into euery citie and place, whither hee himselfe would come.

2 Therefore said hee vnto them, The haruest truly is great, but the labourers are few; pray ye therefore the Lord of the haruest, that he would send foorth labourers into his haruest.

3 Go your wayes: Behold, I send you forth as lambes among wolues.

4 Cary neither purse nor scrip, nor shoes, and salute no man by the way.

5 And into whatsoeuer house yee enter, first say, Peace bee to this house.

6 And if the sonne of peace be there, your peace shall rest vpon it: if not, it shall turne to you againe.

7 And in the same house remaine, eating and drinking such things as they giue: For the labourer is worthy of his hire. Goe not from house to house.

8 And into whatsoeuer citie yee enter, and they receiue you, eate such things as are set before you:

9 And heale the sicke that are therein, and say vnto them, The kingdome of God is come nigh vnto you.

10 But into whatsoeuer citie yee enter, and they receiue you not, goe your waies out into the streetes of the same, and say,

11 Euen the very dust of your citie which cleaueth on vs, we doe wipe off against you: notwithstanding, be yee sure of this, that the kingdome of God is come nigh vnto you.

12 But I say vnto you, That it shall be more tolerable in that day for Sodome, then for that citie.

13 Woe vnto thee Chorazin, wo vnto thee Bethsaida: For if the mighty workes had beene done in Tyre and Sidon, which haue beene done in you, they had a great while agoe repented, sitting in sackcloth and ashes.

14 But it shall be more tolerable for Tyre and Sidon at the iudgment, then for you.

15 And thou Capernaum, which art exalted to heauen, shalt be thrust downe to hell.

17 ¶ And the seuenty returned againe with ioy, saying, Lord, euen the deuils are subiect vnto vs through thy name.

18 And he said vnto them, I beheld Satan as lightning fall from heauen.

19 Behold, I giue vnto you power to tread on serpents and scorpions, and ouer all the power of the enemie: and nothing shall by any meanes hurt you.

20 Notwithstanding in this reioyce not, that the spirits are subiect vnto you: but rather reioyce, because your names are written in heauen.

21 ¶ In that houre Iesus reioyced in spirit, and said, I thanke thee, O father, Lord of heauen and earth, that thou hast hid these things from the wise and prudent, and hast reuealed them vnto babes: euen so father, for so it seemed good in thy sight.

23 ¶ And he turned him vnto his disciples, and said priuately, Blessed are the eyes which see the things that yee see.

25 ¶ And behold, a certaine Lawyer stood vp, and tempted him, saying, Master, what shall I doe to inherite eternall life? He said vnto him,

26 What is written in the law? how readest thou?

28 And he said vnto him, Thou hast answered right: this do, and thou shalt liue.

29 But he willing to iustifie himselfe, said vnto Iesus, And who is my neighbour?

30 And Iesus answering, said, A certaine man went downe from Hierusalem to Iericho, and fel among theeues, which stripped him of his raiment, and wounded him, and departed, leauing him halfe dead.

31 And by chaunce there came downe a certaine Priest that way, and when he saw him, he passed by on the other side.

32 And likewise a Leuite, when hee was at the place, came and looked on him, and passed by on the other side.

33 But a certaine Samaritane as he iourneyed, came where he was; and when hee saw him, hee had compassion on him,

34 And went to him, and bound vp his wounds, powring in oile and wine, and set him on his owne beast, and brought him to an Inne, and tooke care of him.

35 And on the morrow when he departed, hee tooke out two pence, and gaue them to the hoste, and saide vnto him, Take care of him, and whatsoeuer thou spendest more, when I come againe I will repay thee.

36 Which now of these three, thinkest thou, was neighbour vnto him that fell among the theeues?

37 And he said, He that shewed mercie on him. Then said Iesus vnto him, Goe, and doe thou likewise.

38 ¶ Now it came to passe, as they went, that he entred into a certaine village: and a certaine woman named Martha, receiued him into her house.

39 And shee had a sister called Mary, which also sate at Iesus feet, and heard his word:

40 But Martha was cumbred about much seruing, and came to him, and said, Lord, doest thou not care that my sister hath left mee to serue alone? Bid her therefore that she helpe me.

41 And Iesus answered, and saide vnto her, Martha, Martha, thou art carefull, and troubled about many things:

42 But one thing is needefull, and Mary hath chosen that good part, which shall not bee taken away from her.

Seventy disciples sent forth. (1-16) The blessedness of Christ's disciples. (17-24) The good Samaritan. (25-37) Jesus at the house of Martha and Mary. (38-42)1-16 Christ sent the seventy disciples, two and two, that they might strengthen and encourage one another. The ministry of the gospel calls men to receive Christ as a Prince and a Saviour; and he will surely come in the power of his Spirit to all places whither he sends his faithful servants. But the doom of those who receive the grace of God in vain, will be very fearful Those who despise the faithful ministers of Christ, who think meanly of them, and look scornfully upon them, will be reckoned as despisers of God and Christ.

17-24 All our victories over Satan, are obtained by power derived from Jesus Christ, and he must have all the praise. But let us beware of spiritual pride, which has been the destruction of many. Our Lord rejoiced at the prospect of the salvation of many souls. It was fit that particular notice should be taken of that hour of joy; there were few such, for He was a man of sorrows: in that hour in which he saw Satan fall, and heard of the good success of his ministers, in that hour he rejoiced. He has ever resisted the proud, and given grace to the humble. The more simply dependent we are on the teaching, help, and blessing of the Son of God, the more we shall know both of the Father and of the Son; the more blessed we shall be in seeing the glory, and hearing the words of the Divine Saviour; and the more useful we shall be made in promoting his cause.

25-37 If we speak of eternal life, and the way to it, in a careless manner, we take the name of God in vain. No one will ever love God and his neighbour with any measure of pure, spiritual love, who is not made a partaker of converting grace. But the proud heart of man strives hard against these convictions. Christ gave an instance of a poor Jew in distress, relieved by a good Samaritan. This poor man fell among thieves, who left him about to die of his wounds. He was slighted by those who should have been his friends, and was cared for by a stranger, a Samaritan, of the nation which the Jews most despised and detested, and would have no dealings with. It is lamentable to observe how selfishness governs all ranks; how many excuses men will make to avoid trouble or expense in relieving others. But the true Christian has the law of love written in his heart. The Spirit of Christ dwells in him; Christ's image is renewed in his soul. The parable is a beautiful explanation of the law of loving our neighbour as ourselves, without regard to nation, party, or any other distinction. It also sets forth the kindness and love of God our Saviour toward sinful, miserable men. We were like this poor, distressed traveller. Satan, our enemy, has robbed us, and wounded us: such is the mischief sin has done us. The blessed Jesus had compassion on us. The believer considers that Jesus loved him, and gave his life for him, when an enemy and a rebel; and having shown him mercy, he bids him go and do likewise. It is the duty of us all , in our places, and according to our ability, to succour, help, and relieve all that are in distress and necessity.

38-42 A good sermon is not the worse for being preached in a house; and the visits of our friends should be so managed, as to make them turn to the good of their souls. Sitting at Christ's feet, signifies readiness to receive his word, and submission to the guidance of it. Martha was providing for the entertainment of Christ, and those that came with him. Here were respect to our Lord Jesus and right care of her household affairs. But there was something to be blamed. She was for much serving; plenty, variety, and exactness. Worldly business is a snare to us, when it hinders us from serving God, and getting good to our souls. What needless time is wasted, and expense often laid out, even in entertaining professors of the gospel! Though Martha was on this occasion faulty, yet she was a true believer, and in her general conduct did not neglect the one thing needful. The favour of God is needful to our happiness; the salvation of Christ is needful to our safety. Where this is attended to, all other things will be rightly pursued. Christ declared, Mary hath chosen the good part. For one thing is needful, this one thing that she has done, to give up herself to the guidance of Christ. The things of this life will be taken away from us, at the furthest, when we shall be taken away from them; but nothing shall separate from the love of Christ, and a part in that love. Men and devils cannot take it away from us, and God and Christ will not. Let us mind the one thing needful more diligently.

View All Discussusion for Luke Chapter 10... 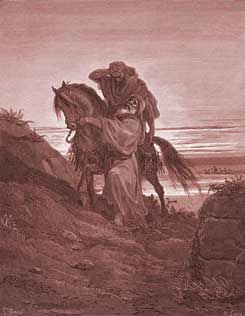 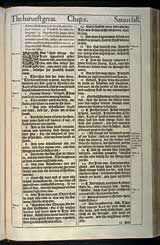