2 Speake vnto Aaron and vnto his sonnes, and vnto all the children of Israel, and say vnto them; This is the thing which the Lord hath commanded, saying;

5 To the end that the children of Israel may bring their sacrifices, which they offer in the open field, euen that they may bring them vnto the Lord, vnto the doore of the Tabernacle of the Congregation vnto the Priest, and offer them for peace offerings vnto the Lord.

6 And the Priest shall sprinckle the blood vpon the Altar of the Lord, at the doore of the Tabernacle of the Congregation, and burne the fat for a sweet sauour vnto the Lord.

7 And they shall no more offer their sacrifices vnto deuils, after whom they haue gone a whoring: This shall be a statute for euer vnto them throughout their generations.

8 ¶ And thou shalt say vnto them, whatsoeuer man there be of the house of Israel, or of the strangers which soiourne among you, that offreth a burnt offering or sacrifice,

9 And bringeth it not vnto the doore of the Tabernacle of the Congregation, to offer it vnto the Lord, euen that man shall be cut off from among his people.

10 ¶ And whatsoeuer man there be of the house of Israel, or of the strangers that soiourne among you, that eateth any maner of blood, I will euen set my face against that soule that eateth blood, and will cut him off from among his people.

12 Therefore I said vnto the children of Israel, No soule of you shall eat blood, neither shall any stranger that soiourneth among you, eat blood.

13 And whatsoeuer man there be of the children of Israel, or of the strangers that soiourne among you, which hunteth and catcheth any beast or foule that may be eaten, he shall euen powre out the blood thereof, and couer it with dust.

15 And euery soule that eateth that which died of it selfe, or that which was torne with beasts, whether it bee one of your owne countrey, or a stranger, he shall both wash his clothes, and bathe himselfe in water, and be vncleane vntill the Euen: then shall he be cleane.

16 But if he wash them not, nor bathe his flesh, then he shal beare his iniquity.

All sacrifices to be offered at the tabernacle. (1-9) Eating of blood, or of animals which died a natural death, forbidden. (10-16)1-9 All the cattle killed by the Israelites, while in the wilderness, were to be presented before the door of the tabernacle, and the flesh to be returned to the offerer, to be eaten as a peace-offering, according to the law. When they entered Canaan, this only continued in respect of sacrifices. The spiritual sacrifices we are now to offer, are not confined to any one place. We have now no temple or altar that sanctifies the gift; nor does the gospel unity rest only in one place, but in one heart, and the unity of the Spirit. Christ is our Altar, and the true Tabernacle; in him God dwells among men. It is in him that our sacrifices are acceptable to God, and in him only. To set up other mediators, or other altars, or other expiatory sacrifices, is, in effect, to set up other gods. And though God will graciously accept our family offerings, we must not therefore neglect attending at the tabernacle.

10-16 Here is a confirmation of the law against eating blood. They must eat no blood. But this law was ceremonial, and is now no longer in force; the coming of the substance does away the shadow. The blood of beasts is no longer the ransom, but Christ's blood only; therefore there is not now the reason for abstaining there then was. The blood is now allowed for the nourishment of our bodies; it is no longer appointed to make an atonement for the soul. Now the blood of Christ makes atonement really and effectually; to that, therefore, we must have regard, and not consider it as a common thing, or treat it with indifference.

View All Discussusion for Leviticus Chapter 17... 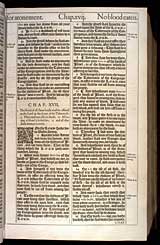