1 How hath the Lord couered the daughter of Zion with a cloud, in his anger, and cast downe from heauen vnto the earth the beautie of Israel, and remembred not his footstoole in the day of his anger?

2 The Lord hath swallowed vp all the habitations of Iacob, and hath not pitied: he hath throwen downe in his wrath the strong holds of the daughter of Iudah: he hath brought them down to the ground: hee hath polluted the kingdome and the princes thereof.

3 He hath cut off in his fierce anger all the horne of Israel: he hath drawen backe his right hand from before the enemy, and he burned against Iacob like a flaming fire which deuoureth round about.

4 He hath bent his bow like an enemy: he stood with his right hand as an aduersary, and slew all that were pleasant to the eye, in the tabernacle of the daughter of Zion: he powred out his furie like fire.

6 And he hath violently taken away his tabernacle, as if it were of a garden, hee hath destroyed his places of the assembly: the Lord hath caused the solemne feasts and Sabbaths to be forgotten in Zion, and hath despised in the indignation of his anger the King and the Priest.

7 The Lord hath cast off his Altar: hee hath abhorred his Sanctuarie: he hath giuen vp into the hand of the enemie the walles of her palaces: they haue made a noise in the house of the Lord, as in the day of a solemne Feast.

8 The Lord hath purposed to destroy the wall of the daughter of Zion: he hath stretched out a line: he hath not withdrawen his hand from destroying: therefore hee made the rampart and the wall to lament: they languished together.

9 Her gates are sunke into the ground: he hath destroyed and broken her barres: her King and her Princes are among the Gentiles: the Law is no more, her prophets also finde no vision from the Lord.

10 The Elders of the daughter of Zion sit vpon the ground and keepe silence: they haue cast vp dust vpon their heads: they haue girded themselues with sackcloth: the virgins of Ierusalem hang downe their heades to the ground.

11 Mine eyes doe faile with teares: my bowels are troubled: my liuer is powred vpon the earth, for the destruction of the daughter of my people, because the children and the sucklings swoone in the streets of the citie.

12 They say to their mothers, Where is corne and wine? when they swooned as the wounded in the streets of the citie, when their soule was powred out into their mothers bosome.

14 Thy Prophets haue seene vaine and foolish things for thee, and they haue not discouered thine iniquitie, to turne away thy captiuitie: but haue seene for thee false burdens, and causes of banishment.

15 All that passe by, clap their hands at thee: they hisse and wagge their head at the daughter of Ierusalem, saying, Is this the citie that men call the perfection of beauty, the ioy of the whole earth?

16 All thine enemies haue opened their mouth against thee: they hisse and gnash the teeth: they say, We haue swallowed her vp: certainly this is the day that we looked for: we haue found, we haue seene it.

17 The Lord hath done that which he had deuised: he hath fulfilled his word that he had commanded in the dayes of old: hee hath throwen downe and hath not pitied: and he hath caused thine enemie to reioyce ouer thee, hee hath set vp the horne of thine aduersaries.

18 Their heart cried vnto the Lord, O wall of the daughter of Zion, let teares runne downe like a riuer, day and night: giue thy selfe no rest, let not the apple of thine eyes cease.

19 Arise, cry out in the night: in the beginning of the watches powre out thine heart like water before the face of the Lord: lift vp thy handes toward him, for the life of thy yong children, that faint for hunger in the top of euery streete.

20 ¶ Behold, O Lord, and consider to whom thou hast done this: shal the women eat their fruit, and children of a spanne long? shall the priest and the prophet be slaine in the Sanctuary of the Lord?

21 The yong and the old lye on the ground in the streets: my virgins and my yong men are fallen by the sword: thou hast slaine them in the day of thy anger: thou hast killed, and not pitied.

22 Thou hast called as in a solemne day my terrours round about, so that in the day of the Lords anger, none escaped nor remained: those that I haue swadled and brought vp, hath mine enemy consumed.

Lamentation for the misery of Jerusalem.1-9 A sad representation is here made of the state of God's church, of Jacob and Israel; but the notice seems mostly to refer to the hand of the Lord in their calamities. Yet God is not an enemy to his people, when he is angry with them and corrects them. And gates and bars stand in no stead when God withdraws his protection. It is just with God to cast down those by judgments, who debase themselves by sin; and to deprive those of the benefit and comfort of sabbaths and ordinances, who have not duly valued nor observed them. What should they do with Bibles, who make no improvement of them? Those who misuse God's prophets, justly lose them. It becomes necessary, though painful, to turn the thoughts of the afflicted to the hand of God lifted up against them, and to their sins as the source of their miseries.

10-22 Causes for lamentation are described. Multitudes perished by famine. Even little children were slain by their mother's hands, and eaten, according to the threatening, #De 28:53|. Multitudes fell by the sword. Their false prophets deceived them. And their neighbours laughed at them. It is a great sin to jest at others' miseries, and adds much affliction to the afflicted. Their enemies triumphed over them. The enemies of the church are apt to take its shocks for its ruins; but they will find themselves deceived. Calls to lamentation are given; and comforts for the cure of these lamentations are sought. Prayer is a salve for every sore, even the sorest; a remedy for every malady, even the most grievous. Our business in prayer is to refer our case to the Lord, and leave it with him. His will be done. Let us fear God, and walk humbly before him, and take heed lest we fall.

View All Discussusion for Lamentations Chapter 2... 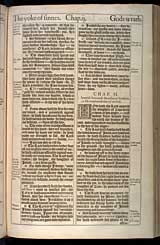