1 And in the eighteenth yeere, the two and twentieth day of the first month, there was talke in the house of Nabuchodonosor king of the Assyrians, that he should as he said auenge himselfe on all the earth.

2 So he called vnto him all his officers, and all his nobles, and communicated with them his secret counsell, and concluded the afflicting of the whole earth out of his owne mouth.

3 Then they decreed to destroy all flesh that did not obey the commaundement of his mouth.

4 And when he had ended his counsell, Nabuchodonosor king of the Assyrians called Olofernes the chiefe captaine of his army, which was next vnto him, and said vnto him,

5 Thus saith the great king, the Lord of the whole earth: behold, thou shalt goe forth from my presence, and take with thee men that trust in their owne strength, of footemen an hundred and twenty thousand, and the number of horses with their riders twelue thousand.

6 And thou shalt goe against all the West countrey, because they disobeyed my commandement.

7 And thou shalt declare vnto them that they prepare for me earth and water: for I will goe forth in my wrath against them, and will couer the whole face of the earth with the feete of mine armie, and I will giue them for a spoile vnto them.

8 So that their slaine shall fill their vallies, and brookes, and the riuer shall be filled with their dead, til it ouerflow.

9 And I will lead them captiues to the vtmost parts of all the earth.

10 Thou therefore shalt goe foorth, and take before hand for me all their coasts, and if they will yeeld themselues vnto thee, thou shalt reserue them for me till the day of their punishment.

11 But concerning them that rebell, let not thine eye spare them: but put them to the slaughter, and spoile them wheresoeuer thou goest.

12 For as I liue, and by the power of my kingdome, whatsoeuer I haue spoken, that will I doe by mine hand.

13 And take thou heede that thou transgresse none of the Commaundements of thy Lord, but accomplish them fully, as I haue commaunded thee, and deferre not to doe them.

14 Then Olofernes went foorth from the presence of his Lord, and called all the gouernours and Captaines, and the officers of the army of Assur.

15 And he mustered the chosen men for the battell, as his Lord had commaunded him, vnto an hundred and twenty thousand, & twelue thousand archers on Horsebacke.

16 And he ranged them as a great army is ordered for the warre.

17 And he tooke Camels, and Asses for their cariages a very great number, and sheepe, and Oxen, & Goates without number, for their prouision,

18 And plenty of vittaile for euery man of the army, and very much gold, and siluer, out of the Kings house.

19 Then he went foorth and all his power to go before King Nabuchodonosor in the voyage, and to couer al the face of the earth Westward with their charets, and horsemen, and their chosen footmen.

20 A great multitude also of sundry countries came with them, like locusts, and like the sand of the earth: for the multitude was without number.

21 And they went foorth of Nineue, three dayes iourney toward the plaine of Bectileth, and pitched from Bectileth neere the mountaine, which is at the left hand of the vpper Cilicia.

22 Then he tooke all his armie, his footmen, and horsemen and chariots, and went from thence into the hill countrey,

23 And destroyed Phud, and Lud: and spoiled all the children of Rasses, and the children of Ismael, which were toward the wildernesse at the South of the land of the Chellians.

24 Then he went ouer Euphrates, and went through Mesopotamia, and destroyed all the high cities that were vpon the riuer Arbonai, till you come to the sea.

25 And hee tooke the borders of Cilicia, and killed all that resisted him, and came to the borders of Iapheth, which were toward the South, ouer against Arabia.

26 He compassed also all the children of Madian, and burnt vp their tabernacles, and spoiled their sheepcoats.

27 Then hee went downe into the plaine of Damascus in the time of wheat haruest, and burnt vp all their fieldes, and destroyed their flockes, and heards, also he spoiled their cities, and vtterly wasted their countreys, and smote all their yong men with the edge of the sword.

28 Therefore the feare and dread of him, fell vpon all the inhabitants of the sea coastes, which were in Sidon and Tyrus, and them that dwelt in Sur, and Ocina, and all that dwelt in Ienmaan, and they that dwelt in Azotus, and Aschalon feared him greatly.

View All Discussusion for Judith Chapter 2... 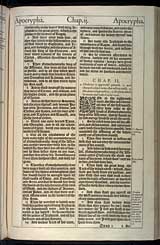