1 Then Ierubbaal (who is Gideon) and all the people that were with him, rose vp earely, and pitched beside the well of Harod: so that the hoste of the Midianites were on the North side of them by the hill of Moreh, in the valley.

2 And the Lord said vnto Gideon, The people that are with thee, are too many for me to giue the Midianites into their handes, lest Israel vaunt themselues against mee, saying, Mine owne hand hath saued me.

3 Now therefore go to, proclaime in the eares of the people, saying, Whosoeuer is fearefull and afraid, let him returne and depart earely from mount Gilead: and there returned of the people twentie and two thousand, & there remained ten thousand.

5 So he brought downe the people vnto the water: and the Lord sayd vnto Gideon, Euery one that lappeth of the water with his tongue as a dog lappeth, him shalt thou set by himselfe, likewise euery one that boweth downe vpon his knees to drinke.

6 And the number of them that lapped putting their hand to their mouth, were three hundred men: but all the rest of the people bowed downe vpon their knees to drinke water.

7 And the Lord said vnto Gideon, By the three hundred men that lapped, will I saue you, and deliuer the Midianites into thine hand: and let all the other people goe euery man vnto his place.

8 So the people tooke victuals in their hand, and their trumpets: and he sent all the rest of Israel, euery man vnto his tent, and reteined those three hundred men: and the hoste of Midian was beneath him in the valley.

9 ¶ And it came to passe the same night, that the Lord sayd vnto him, Arise, get thee downe vnto the hoste, for I haue deliuered it into thine hand.

10 But if thou feare to goe downe, goe thou with Phurah thy seruant downe to the hoste.

11 And thou shalt heare what they say, and afterward shall thine handes be strengthened to goe downe vnto the hoste. Then went hee downe, with Phurah his seruant, vnto the outside of the armed men, that were in the hoste.

12 And the Midianites, and the Amalekites, and all the children of the East, lay along in the valley like grashoppers for multitude, and their camels were without number, as the sand by the Sea side for multitude.

13 And when Gideon was come, beholde, there was a man that tolde a dreame vnto his fellow, and sayd, Behold, I dreamed a dreame, and loe, a cake of Barley bread tumbled into the hoste of Midian, and came vnto a tent, and smote it that it fell, and ouerturned it, that the tent lay along.

14 And his fellow answered, and said, This is nothing els saue the sword of Gideon the sonne of Ioash, a man of Israel: for into his hand hath God deliuered Midian, and all the hoste.

15 ¶ And it was so, when Gideon heard the telling of the dreame, and the interpretation thereof, that hee worshipped, and returned into the host of Israel, and sayd, Arise, for the Lord hath deliuered into your hand the host of Midian.

16 And he diuided the three hundred men into three companies, and hee put a trumpet in euery mans hand, with empty pitchers, and lampes within the pitchers,

17 And hee said vnto them, Looke on mee, and doe likewise; and beholde, when I come to the outside of the campe, it shall be that as I doe, so shall ye doe.

18 When I blow with a trumpet, I and all that are with mee, then blow ye the trumpets also on euery side of all the campe, and say, The sword of the Lord, and of Gideon.

19 ¶ So Gideon and the hundred men that were with him, came vnto the outside of the campe, in the beginning of the middle watch, and they had but newly set the watch, and they blew the trumpets, and brake the pitchers that were in their hands.

20 And the three companies blew the trumpets, and brake the pitchers, and held the lampes in their left hands, and the trumpets in their right hands to blow withall: and they cryed, The sword of the Lord, and of Gideon.

21 And they stood euery man in his place, round about the campe: and all the host ranne, and cried, and fled.

22 And the three hundred blew the trumpets, and the Lord set euery mans sword against his fellow, euen throughout all the host: and the host fled to Beth-shittah, in Zererath, and to the border of Abel Meholah, vnto Tabbath.

23 And the men of Israel gathered themselues together out of Naphtali, and out of Asher, and out of all Manasseh, and pursued after the Midianites.

25 And they tooke two Princes of the Midianites, Oreb, and Zeeb; and they slew Oreb vpon the rocke Oreb, and Zeeb they slew at the winepresse of Zeeb, and pursued Midian, and brought the heads of Oreb and Zeeb, to Gideon on the other side Iordan.

Gideon's army reduced. (1-8) Gideon is encouraged. (9-15) The defeat of the Midianites. (16-22) The Ephraimites take Oreb and Zeeb. (23-25)1-8. God provides that the praise of victory may be wholly to himself, by appointing only three hundred men to be employed. Activity and prudence go with dependence upon God for help in our lawful undertakings. When the Lord sees that men would overlook him, and through unbelief, would shrink from perilous services, or that through pride they would vaunt themselves against him, he will set them aside, and do his work by other instruments. Pretences will be found by many, for deserting the cause and escaping the cross. But though a religious society may thus be made fewer in numbers, yet it will gain as to purity, and may expect an increased blessing from the Lord. God chooses to employ such as are not only well affected, but zealously affected in a good thing. They grudged not at the liberty of the others who were dismissed. In doing the duties required by God, we must not regard the forwardness or backwardness of others, nor what they do, but what God looks for at our hands. He is a rare person who can endure that others should excel him in gifts or blessings, or in liberty; so that we may say, it is by the special grace of God that we regard what God says to us, and not look to men what they do.

9-15 The dream seemed to have little meaning in it; but the interpretation evidently proved the whole to be from the Lord, and discovered that the name of Gideon had filled the Midianites with terror. Gideon took this as a sure pledge of success; without delay he worshipped and praised God, and returned with confidence to his three hundred men. Wherever we are, we may speak to God, and worship him. God must have the praise of that which encourages our faith. And his providence must be acknowledged in events, though small and seemingly accidental.

16-22 This method of defeating the Midianites may be alluded to, as exemplifying the destruction of the devil's kingdom in the world, by the preaching of the everlasting gospel, the sounding that trumpet, and the holding forth that light out of earthen vessels, for such are the ministers of the gospel, #2Co 4:6,7|. God chose the foolish things of the world to confound the wise, a barley-cake to overthrow the tents of Midian, that the excellency of the power might be of God only. The gospel is a sword, not in the hand, but in the mouth: the sword of the Lord and of Gideon; of God and Jesus Christ, of Him that sits on the throne and the Lamb. The wicked are often led to avenge the cause of God upon each other, under the power of their delusions, and the fury of their passions. See also how God often makes the enemies of the church instruments to destroy one another; it is a pity that the church's friends should ever act like them.

23-25 Two chief commanders of the host of Midian were taken and slain by the men of Ephraim. It were to be wished that we all did as these did, and that where help is needed, that it were willingly and readily performed by another. And that if there were any excellent and profitable matter begun, we were willing to have fellow-labourers to the finishing and perfecting the same, and not, as often, hinder one another.

View All Discussusion for Judges Chapter 7... 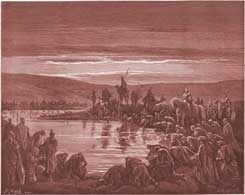 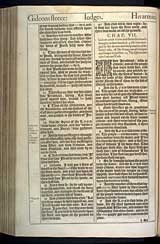