1 Then sang Deborah, and Barak the son of Abinoam, on that day, saying,

2 Praise ye the Lord, for the auenging of Israel, when the people willingly offered themselues.

4 Lord, when thou wentest out of Seir, when thou marchedst out of the field of Edom, the earth trembled, and the heauens dropped, the clouds also dropped water.

6 In the dayes of Shamgar the son of Anath, in the dayes of Iael, the high wayes were vnoccupied, and the traueilers walked thorow by-wayes.

7 The inhabitants of the villages ceased, they ceased in Israel, vntill that I Deborah arose, that I arose a mother in Israel.

8 They chose new gods; then was warre in the gates: was there a shield or speare seene among fourtie thousand in Israel?

9 My heart is toward the gouernours of Israel, that offered themselues willingly among the people: Blesse ye the Lord.

10 Speake yee that ride on white asses, yee that sit in Iudgement, and walke by the way.

14 Out of Ephraim was there a roote of them against Amalek, after thee Beniamin, among thy people: Out of Machir came downe gouernours, and out of Zebulun they that handle the pen of the writer.

15 And the princes of Issachar were with Deborah: euen Issachar, and also Barak, he was sent on foot into the valley: for the diuisions of Reuben, there were great thoughts of heart.

16 Why abodest thou among the sheepefolds, to heare the bleatings of the flocks? for the diuisions of Reuben there were great searchings of heart.

17 Gilead abode beyond Iordan: and why did Dan remaine in ships? Asher continued on the sea shore, and abode in his breaches.

18 Zebulun and Naphtali were a people that ieoparded their liues vnto the death, in the high places of the field.

19 The kings came and fought, then fought the kings of Canaan in Taanach by the waters of Megiddo, they tooke no gaine of money.

20 They fought from heauen, the starres in their courses fought against Sisera.

21 The riuer of Kishon swept them away, that ancient riuer, the riuer Kishon: O my soule, thou hast troden downe strength.

24 Blessed aboue women shal Iael the wife of Heber the Kenite be, blessed shall she be aboue women in the tent.

25 He asked water, and she gaue him milke, shee brought foorth butter in a lordly dish.

26 Shee put her hand to the naile, and her right hand to the workemens hammer: and with the hammer shee smote Sisera, shee smote off his head, when she had pearsed & striken through his temples.

28 The mother of Sisera looked out at a window, and cried through the lattesse, Why is his charet so long in comming? Why tarie the wheeles of his charets?

29 Her wise ladies answered her, yea she returned answere to her selfe,

31 So let all thine enemies perish, O Lord: but let them that loue him, be as the Sunne when he goeth foorth in his might. And the land had rest fourtie yeeres.

Praise and glory ascribed to God. (1-5) The distress and deliverance of Israel. (6-11) Some commended, others censured. (12-23) Sisera's mother disappointed. (24-31)1-5. No time should be lost in returning thanks to the Lord for his mercies; for our praises are most acceptable, pleasant, and profitable, when they flow from a full heart. By this, love and gratitude would be more excited and more deeply fixed in the hearts of believers; the events would be more known and longer remembered. Whatever Deborah, Barak, or the army had done, the Lord must have all the praise. The will, the power, and the success were all from Him.

6-11. Deborah describes the distressed state of Israel under the tyranny of Jabin, that their salvation might appear more gracious. She shows what brought this misery upon them. It was their idolatry. They chose new gods, with new names. But under all these images, Satan was worshipped. Deborah was a mother to Israel, by diligently promoting the salvation of their souls. She calls on those who shared the advantages of this great salvation, to offer up thanks to God for it. Let such as are restored, not only to their liberty as other Israelites, but to their rank, speak God's praises. This is the Lord's doing. In these acts of his, justice was executed on his enemies. In times of persecution, God's ordinances, the walls of salvation, whence the waters of life are drawn, are resorted to at the hazard of the lives of those who attend them. At all times Satan will endeavour to hinder the believer from drawing near to the throne of grace. Notice God's kindness to his trembling people. It is the glory of God to protect those who are most exposed, and to help the weakest. Let us notice the benefit we have from the public peace, the inhabitants of villages especially, and give God the praise.

12-23 Deborah called on her own soul to be in earnest. He that will set the hearts of other men on fire with the love of Christ, must himself burn with love. Praising God is a work we should awake to, and awake ourselves unto. She notices who fought against Israel, who fought for them, and who kept away. Who fought against them. They were obstinate enemies to God's people, therefore the more dangerous. Who fought for them. The several tribes that helped are here spoken of with honour; for though God is above all to be glorified, those who are employed must have their due praise, to encourage others. But the whole creation is at war with those to whom God is an enemy. The river of Kishon fought against their enemies. At most times it was shallow, yet now, probably by the great rain that fell, it was so swelled, and the stream so deep and strong, that those who attempted to pass, were drowned. Deborah's own soul fought against them. When the soul is employed in holy exercises, and heart-work is made of them, through the grace of God, the strength of our spiritual enemies will be trodden down, and will fall before us. She observes who kept away, and did not side with Israel, as might have been expected. Thus many are kept from doing their duty by the fear of trouble, the love of ease, and undue affection to their worldly business and advantage. Narrow, selfish spirits care not what becomes of God's church, so that they can but get, keep, and save money. All seek their own, #Php 2:21|. A little will serve those for a pretence to stay at home, who have no mind to engage in needful services, because there is difficulty and danger in them. But we cannot keep away from the contest between the Lord and his enemies; and if we do not actively endeavour to promote his cause in this wicked world, we shall fall under the curse against the workers of iniquity. Though He needs no human help, yet he is pleased to accept the services of those who improve their talents to advance his cause. He requires every man to do so.

24-31 Jael had a special blessing. Those whose lot is cast in the tent, in a low and narrow sphere, if they serve God according to the powers he has given them, shall not lose their reward. The mother of Sisera looked for his return, not in the least fearing his success. Let us take heed of indulging eager desires towards any temporal good, particularly toward that which cherishes vain-glory, for that was what she here doted on. What a picture does she present of an ungodly and sensual heart! How shameful and childish these wishes of an aged mother and her attendants for her son! And thus does God often bring ruin on his enemies when they are most puffed up. Deborah concludes with a prayer to God for the destruction of all his foes, and for the comfort of all his friends. Such shall be the honour, and joy of all who love God in sincerity, they shall shine for ever as the sun in the firmament.

View All Discussusion for Judges Chapter 5... 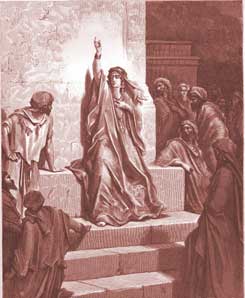 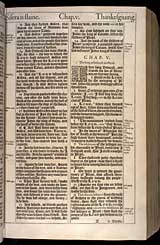