1 And the children of Israel againe did euil in the sight of the Lord, when Ehud was dead.

2 And the Lord sold them into the hande of Iabin king of Canaan: that reigned in Hazor, the captaine of whose host was Sisera, which dwelt in Harosheth of the Gentiles.

4 ¶ And Deborah a prophetesse, the wife of Lapidoth, shee iudged Israel at that time.

5 And shee dwelt vnder the palme tree of Deborah, betweene Ramah and Bethel in mount Ephraim: and the children of Israel came vp to her for iudgement.

7 And I wil draw vnto thee to the riuer Kishon, Sisera the captaine of Iabins army, with his charets, and his multitude, and I will deliuer him into thine hand.

9 And she said, I wil surely go with thee, notwithstanding the iourney that thou takest, shal not be for thine honor: for the Lord shall sell Sisera into the hand of a woman. And Deborah arose, & went with Barak to Kedesh.

10 ¶ And Barak called Zebulun, and Naphtali to Kedesh, and he went vp with ten thousand men at his feete: and Deborah went vp with him.

11 Now Heber the Kenite, which was of the children of Hobab the father in law of Moses, had seuered himselfe from the Kenites, and pitched his tent vnto the plaine of Zaanaim, which is by Kedesh.

12 And they shewed Sisera, that Barak the sonne of Abinoam was gone vp to mount Tabor.

13 And Sisera gathered together all his charets, euen nine hundred charets of iron, and al the people that were with him, from Harosheth of the Gentiles, vnto the riuer of Kishon.

14 And Deborah said vnto Barak, Up, for this is the day in which the Lord hath deliuered Sisera into thine hand: Is not the Lord gone out before thee? so Barak went downe from mount Tabor, and ten thousand men after him.

15 And the Lord discomfited Sisera, and all his charets, and all his hoste with the edge of the sword, before Barak: so that Sisera lighted downe off his charet, and fled away on his feet.

16 But Barak pursued after the charets, and after the hoste vnto Harosheth of the Gentiles, and all the host of Sisera fell vpon the edge of the sword; and there was not a man left.

18 ¶ And Iael went out to meete Sisera, and said vnto him, Turne in, my lord, turne in to me, feare not. And when hee had turned in vnto her, into the tent, shee couered him with a mantle.

19 And he said vnto her, Giue me, I pray thee, a litle water to drinke, for I am thirstie. And she opened a bottle of milke, and gaue him drinke, and couered him.

20 Againe he said vnto her, Stand in the doore of the tent, and it shall bee when any man doeth come and enquire of thee and say, Is there any man here? that thou shalt say, No.

21 Then Iael Hebers wife, tooke a naile of the tent, and tooke an hammer in her hand, and went softly vnto him, and smote the naile into his temples, and fastened it into the ground: (for he was fast asleepe, and weary;) so he died.

22 And behold, as Barak pursued Sisera, Iael came out to meet him, and said vnto him, Come, and I will shew thee the man whom thou seekest. And when he came into her tent, behold, Sisera lay dead, and the naile was in his temples.

23 So God subdued on that day, Iabin the king of Canaan, before the children of Israel.

24 And the hand of the children of Israel prospered, & preuailed against Iabin the king of Canaan, vntill they had destroyed Iabin king of Canaan.

Israel again revolts, and is oppressed by Jabin. (1-3) Deborah concerts their deliverance with Barak. (4-9) Sisera defeated. (10-16) Sisera put to death by Jael. (17-24)1-3. The land had rest for eighty years, which should have confirmed them in their religion; but it made them secure, and indulge their lusts. Thus the prosperity of fools destroys them. Jabin and his general Sisera, mightily oppressed Israel. This enemy was nearer than any of the former. Israel cried unto the Lord, when distress drove them to him, and they saw no other way of relief. Those who slight God in prosperity, will find themselves under a necessity of seeking him in trouble.

4-9 Deborah was a prophetess; one instructed in Divine knowledge by the inspiration of the Spirit of God. She judged Israel as God's mouth to them; correcting abuses, and redressing grievances. By God's direction, she ordered Barak to raise an army, and engage Jabin's forces. Barak insisted much upon her presence. Deborah promised to go with him. She would not send him where she would not go herself. Those who in God's name call others to their duty, should be ready to assist them in it. Barak values the satisfaction of his mind, and the good success of his enterprise, more than mere honour.

10-16. Siser's confidence was chiefly in his chariots. But if we have ground to hope that God goes before us, we may go on with courage and cheerfulness. Be not dismayed at the difficulties thou meetest with in resisting Satan, in serving God, or suffering for him; for is not the Lord gone before thee? Follow him then fully. Barak went down, though upon the plain the iron chariots would have advantage against him: he quitted the mountain in dependence on the Divine power; for in the Lord alone is the salvation of his people, #Jer 3:23|. He was not deceived in his confidence. When God goes before us in our spiritual conflicts, we must bestir ourselves; and when, by his grace, he gives us some success against the enemies of our souls, we must improve it by watchfulness and resolution.

17-24 Sisera's chariots had been his pride and his confidence. Thus are those disappointed who rest on the creature; like a broken reed, it not only breaks under them, but pierces them with many sorrows. The idol may quickly become a burden, #Isa 46:1|; what we were sick for, God can make us sick of. It is probable that Jael really intended kindness to Sisera; but by a Divine impulse she was afterwards led to consider him as the determined enemy of the Lord and of his people, and to destroy him. All our connexions with God's enemies must be broken off, if we would have the Lord for our God, and his people for our people. He that had thought to have destroyed Israel with his many iron chariots, is himself destroyed with one iron nail. Thus the weak things of the world confound the mighty. The Israelites would have prevented much mischief, if they had sooner destroyed the Canaanites, as God commanded and enabled them: but better be wise late, and buy wisdom by experience, than never be wise.

View All Discussusion for Judges Chapter 4... 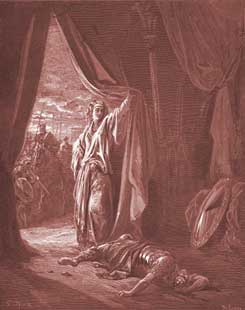 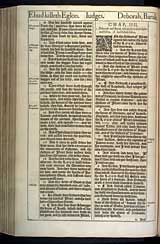