1 Now these are the nations which the Lord left, to prooue Israel by them, (euen as many of Israel as had not knowen all the warres of Canaan;

2 Onely that the generations of the children of Israel might know to teach them warre, at the least such as before knew nothing thereof:)

3 Namely fiue lords of the Philistines, and all the Canaanites, and the Sidonians, and the Hiuites that dwelt in mount Lebanon, from mount Baal-Hermon, vnto the entring in of Hamath.

4 And they were to prooue Israel by them, to know whether they would hearken vnto the Commandements of the Lord, which hee commaunded their fathers by the hand of Moses.

5 ¶ And the children of Israel dwelt among the Canaanites, Hittites, and Amorites, and Perizzites, and Hiuites, and Iebusites,

7 And the children of Israel did euill in the sight of the Lord, and forgate the Lord their God, and serued Baalim, and the groues.

11 And the land had rest forty yeres: and Othniel the sonne of Kenaz died.

13 And hee gathered vnto him the children of Ammon, and Amalek, and went and smote Israel, and possessed the city of Palme-trees.

14 So the children of Israel serued Eglon the King of Moab eighteene yeeres.

16 But Ehud made him a dagger (which had two edges) of a cubite length, and he did gird it vnder his raiment, vpon his right thigh,

17 And he brought the present vnto Eglon king of Moab: and Eglon was a very fat man.

18 And when he had made an end to offer the Present, he sent away the people that bare the Present.

19 But hee himselfe turned againe from the quarries that were by Gilgal, and said, I haue a secret errand vnto thee, O king: who said, Keepe silence. And all that stood by him, went out from him.

20 And Ehud came vnto him, and he was sitting in a Summer parlour, which hee had for himselfe alone: And Ehud said, I haue a message from God vnto thee. And he arose out of his seat.

21 And Ehud put forth his left hand, and tooke the dagger from his right thigh, and thrust it into his belly.

22 And the haft also went in after the blade: and the fatte closed vpon the blade, so that hee could not drawe the dagger out of his belly, and the dirt came out.

23 Then Ehud went forth through the porche, and shut the doores of the parlour vpon him, and locked them.

24 When he was gone out, his seruants came, and when they saw, that behold, the doores of the parlour were locked, they said, Surely he couereth his feet in his Summer chamber.

25 And they taried till they were ashamed: and behold, he opened not the doores of the parlour, therefore they tooke a key, and opened them: and behold, their lord was fallen downe dead on the earth.

26 And Ehud escaped while they taried: and passed beyond the quarries, and escaped vnto Seirath.

27 And it came to passe when hee was come, that hee blew a trumpet in the mountaine of Ephraim, and the children of Israel went downe with him from the mount, & he before them.

28 And hee said vnto them, Follow after me: for the Lord hath deliuered your enemies the Moabites into your hand. And they went downe after him, and tooke the foords of Iordan toward Moab, and suffered not a man to passe ouer.

29 And they slewe of Moab at that time about ten thousand men, all lusty, and all men of valour, and there escaped not a man.

30 So Moab was subdued that day vnder the hand of Israel: and the land had rest fourescore yeeres.

31 ¶ And after him was Shamgar the sonne of Anath, which slew of the Philistines sixe hundred men with an oxe goad, and he also deliuered Israel.

The nations left to prove Israel. (1-7) Othniel delivers Israel. (8-11) Ehud delivers Israel from Eglon. (12-30) Shamgar delivers and judges Israel. (31)1-7 As the Israelites were a type of the church on earth, they were not to be idle and slothful. The Lord was pleased to try them by the remains of the devoted nations they spared. Temptations and trials detect the wickedness of the hearts of sinners; and strengthen he graces of believers in their daily conflict with Satan, sin, and this evil world. They must live in this world, but they are not of it, and are forbidden to conform to it. This marks the difference between the followers of Christ and mere professors. The friendship of the world is more fatal than its enmity; the latter can only kill the body, but the former murders many precious souls.

8-11 The first judge was Othniel: even in Joshua's time Othniel began to be famous. Soon after Israel's settlement in Canaan their purity began to be corrupted, and their peace disturbed. But affliction makes those cry to God who before would scarcely speak to him. God returned in mercy to them for their deliverance. The Spirit of the Lord came upon Othniel. The Spirit of wisdom and courage to qualify him for the service, and the Spirit of power to excite him to it. He first judged Israel, reproved and reformed them, and then went to war. Let sin at home be conquered, that worst of enemies, then enemies abroad will be more easily dealt with. Thus let Christ be our Judge and Lawgiver, then he will save us.

12-30 When Israel sins again, God raises up a new oppressor. The Israelites did ill, and the Moabites did worse; yet because God punishes the sins of his own people in this world, Israel is weakened, and Moab strengthened against them. If lesser troubles do not do the work, God will send greater. When Israel prays again, God raises up Ehud. As a judge, or minister of Divine justice, Ehud put to death Eglon, the king of Moab, and thus executed the judgments of God upon him as an enemy to God and Israel. But the law of being subject to principalities and powers in all things lawful, is the rule of our conduct. No such commissions are now given; to pretend to them is to blaspheme God. Notice Ehud's address to Eglon. What message from God but a message of vengeance can a proud rebel expect? Such a message is contained in the word of God; his ministers are boldly to declare it, without fearing the frown, or respecting the persons of sinners. But, blessed be God, they have to deliver a message of mercy and of free salvation; the message of vengeance belongs only to those who neglect the offers of grace. The consequence of this victory was, that the land had rest eighty years. It was a great while for the land to rest; yet what is that to the saints' everlasting rest in the heavenly Canaan.

31 The side of the country which lay south-west, was infested by the Philistines. God raised up Shamgar to deliver them; having neither sword nor spear, he took an ox-goad, the instrument next at hand. God can make those serviceable to his glory and to his church's good, whose birth, education, and employment, are mean and obscure. It is no matter what the weapon is, if God directs and strengthens the arm. Often he works by unlikely means, that the excellency of the power may appear to be of God.

View All Discussusion for Judges Chapter 3... 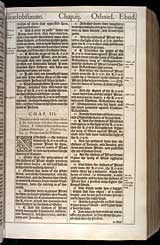