1 And an Angel of the Lord came vp from Gilgal to Bochim, and said, I made you to goe vp out of Egypt, and haue brought you vnto the land which I sware vnto your fathers, and I said, I will neuer breake my Couenant with you.

2 And yee shall make no league with the inhabitants of this land, you shal throw downe their altars: But ye haue not obeyed my voyce; Why haue ye done this?

3 Wherefore I also said, I will not driue them out from before you: but they shalbe as thornes in your sides, and their gods shalbe a snare vnto you.

4 And it came to passe when the Angel of the Lord spake these words vnto all the children of Israel, that the people lift vp their voice, and wept.

5 And they called the name of that place Bochim: and they sacrificed there vnto the Lord.

6 ¶ And when Ioshua had let the people goe, the children of Israel went euery man vnto his inheritance, to possesse the land.

8 And Ioshua the sonne of Nun, the seruant of the Lord died, being an hundred and ten yeeres old.

9 And they buried him in the border of his inheritance in Timnath-Heres, in the mount of Ephraim, on the North side of the hill Gaash.

10 And also all that generation were gathered vnto their fathers: and there arose another generation after them, which knew not the Lord, nor yet the woorkes which hee had done for Israel.

11 ¶ And the children of Israel did euil in the sight of the Lord, and serued Baalim:

12 And they forsooke the Lord God of their fathers, which brought them out of the land of Egypt, and followed other gods, of the gods of the people that were round about them, and bowed themselues vnto them, and prouoked the Lord to anger.

13 And they forsooke the Lord, and serued Baal and Ashtaroth.

16 ¶ Neuerthelesse, the Lord raysed vp Iudges, which deliuered them out of the hand of those that spoyled them.

17 And yet they would not hearken vnto their Iudges, but they went a whoring after other gods, and bowed themselues vnto them: they turned quickly out of the way, which their fathers walked in, obeying the Commandements of the Lord; but they did not so.

18 And when the Lord raised them vp Iudges, then the Lord was with the Iudge, and deliuered them out of the hand of their enemies, all the dayes of the Iudge (for it repented the Lord, because of their gronings by reason of them that oppressed them, and vexed them:)

19 And it came to passe when the Iudge was dead, that they returned, and corrupted themselues more then their fathers, in following other gods, to serue them, and to bow downe vnto them: they ceased not from their owne doings, nor from their stubborne way.

20 ¶ And the anger of the Lord was hote against Israel, and he said, Because that this people hath transgressed my Couenant which I commanded their fathers, and haue not hearkened vnto my voice:

21 I also will not henceforth driue out any from before them of the nations which Ioshua left when he died:

22 That through them I may proue Israel, whether they will keepe the way of the Lord, to walke therein, as their fathers did keepe it, or not.

23 Therefore the Lord left those nations, without driuing them out hastily, neither deliuered he them into the hand of Ioshua.

The angel of the Lord rebukes the people. (1-5) The wickedness of the new generation after Joshua. (6-23)1-5 It was the great Angel of the covenant, the Word, the Son of God, who spake with Divine authority as Jehovah, and now called them to account for their disobedience. God sets forth what he had done for Israel, and what he had promised. Those who throw off communion with God, and have fellowship with the unfruitful works of darkness, know not what they do now, and will have nothing to say for themselves in the day of account shortly. They must expect to suffer for this their folly. Those deceive themselves who expect advantages from friendship with God's enemies. God often makes men's sin their punishment; and thorns and snares are in the way of the froward, who will walk contrary to God. The people wept, crying out against their own folly and ingratitude. They trembled at the word, and not without cause. It is a wonder sinners can ever read the Bible with dry eyes. Had they kept close to God and their duty, no voice but that of singing had been heard in their congregation; but by their sin and folly they made other work for themselves, and nothing is to be heard but the voice of weeping. The worship of God, in its own nature, is joy, praise, and thanksgiving; our sins alone render weeping needful. It is pleasing to see men weep for their sins; but our tears, prayers, and even amendment, cannot atone for sin.

6-23 We have a general idea of the course of things in Israel, during the time of the Judges. The nation made themselves as mean and miserable by forsaking God, as they would have been great and happy if they had continued faithful to him. Their punishment answered to the evil they had done. They served the gods of the nations round about them, even the meanest, and God made them serve the princes of the nations round about them, even the meanest. Those who have found God true to his promises, may be sure that he will be as true to his threatenings. He might in justice have abandoned them, but he could not for pity do it. The Lord was with the judges when he raised them up, and so they became saviours. In the days of the greatest distress of the church, there shall be some whom God will find or make fit to help it. The Israelites were not thoroughly reformed; so mad were they upon their idols, and so obstinately bent to backslide. Thus those who have forsaken the good ways of God, which they have once known and professed, commonly grow most daring and desperate in sin, and have their hearts hardened. Their punishment was, that the Canaanites were spared, and so they were beaten with their own rod. Men cherish and indulge their corrupt appetites and passions; therefore God justly leaves them to themselves, under the power of their sins, which will be their ruin. God has told us how deceitful and desperately wicked our hearts are, but we are not willing to believe it, until by making bold with temptation we find it true by sad experience. We need to examine how matters stand with ourselves, and to pray without ceasing, that we may be rooted and grounded in love, and that Christ may dwell in our hearts by faith. Let us declare war against every sin, and follow after holiness all our days.

View All Discussusion for Judges Chapter 2... 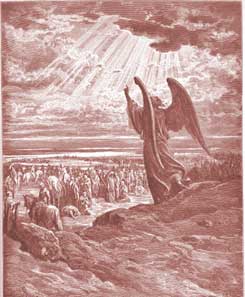 An Angel Appears to the Israelites 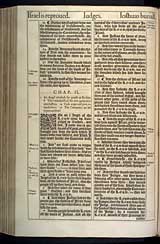