1 In those dayes there was no king in Israel: and in those daies the tribe of the Danites sought them an inheritance to dwel in: for vnto that day, all their inheritance had not fallen vnto them, among the tribes of Israel.

2 And the children of Dan sent of their family, fiue men from their coasts, men of valour, from Zorah, and from Eshtaol, to spy out the land, and to search it, and they said vnto them, Goe, search the land: Who when they came to mount Ephraim, to the house of Micah, they lodged there.

3 When they were by the house of Micah, they knew the voice of the yong man the Leuite: and they turned in thither, & said vnto him, Who brought thee hither? And what makest thou in this place? and what hast thou here?

4 And hee said vnto them, Thus and thus dealeth Micah with me, and hath hired me, and I am his Priest.

5 And they sayd vnto him, Aske counsell, we pray thee, of God, that we may know, whether our way which we goe, shall be prosperous.

6 And the Priest said vnto them, Goe in peace: before the Lord is your way wherein ye goe.

7 ¶ Then the fiue men departed, and came to Laish, and saw the people that were therein, how they dwelt carelesse, after the maner of the Zidonians, quiet and secure, and there was no magistrate in the land that might put them to shame in any thing, and they were farre from the Zidonians, and had no businesse with any man.

9 And they said, Arise, that we may goe vp against them: for we haue seene the land, and behold, it is very good: and are ye still? Bee not slothfull to goe, and to enter to possesse the land.

10 When ye goe, ye shall come vnto a people secure, and to a large land: for God hath giuen it into your handes: a place where there is no want of any thing, that is in the earth.

11 ¶ And there went from thence of the family of the Danites out of Zorah, and out of Eshtaol, sixe hundred men, appoynted with weapons of warre.

12 And they went vp, and pitched in Kiriath-iearim, in Iudah: Wherefore they called that place Mahaneh-Dan, vnto this day: behold, it is behinde Kiriath-iearim.

13 And they passed thence vnto mount Ephraim, and came vnto the house of Micah.

14 ¶ Then answered the fiue men that went to spie out the countrey of Laish, and saide vnto their brethren, Doe ye know that there is in these houses an Ephod, and Teraphim, and a grauen image, and a molten image? Now therefore consider what ye haue to doe.

16 And the six hundred men appointed with their weapons of war, which were of the children of Dan, stood by the entring of the gate.

17 And the fiue men that went to spie out the land, went vp and came in thither, and tooke the grauen image, and the Ephod, and the Teraphim, and the molten image: and the Priest stood in the entring of the gate, with the sixe hundreth men that were appointed with weapons of warre.

18 And these went into Micahs house, and fetched the carued image, the Ephod, and the Teraphim, and the molten image: then said the Priest vnto them, What doe ye?

19 And they said vnto him, Hold thy peace, lay thine hand vpon thy mouth, and goe with vs, and bee to vs a father and a Priest: Is it better for thee to bee a Priest vnto the house of one man, or that thou be a Priest vnto a tribe and a family in Israel?

20 And the Priests heart was glad, and he tooke the Ephod, and the Teraphim, and the grauen image, and went in the middest of the people.

21 So they turned, and departed, and put the little ones, and the cattell, and the cariage before them.

22 ¶ And when they were a good way from the house of Micah, the men that were in the houses neere to Micahs house, were gathered together, and ouertooke the children of Dan.

23 And they cried vnto the children of Dan: and they turned their faces, and said vnto Micah, What aileth thee, that thou commest with such a company?

24 And he said, Yee haue taken away my gods which I made, and the Priest, and ye are gone away: and what haue I more? and what is this that yee say vnto me, What aileth thee?

25 And the children of Dan said vnto him, Let not thy voyce bee heard among vs, lest angry fellowes run vpon thee, and thou lose thy life, with the liues of thy houshold.

26 And the children of Dan went their way: and when Micah sawe that they were too strong for him, he turned and went backe vnto his house.

27 And they tooke the things which Micah had made, and the Priest which hee had, and came vnto Laish, vnto a people that were at quiet, and secure, and they smote them with the edge of the sword, and burnt the citie with fire.

28 And there was no deliuerer, because it was farre from Zidon, and they had no businesse with any man: and it was in the valley that lieth by Beth-rehob, and they built a citie, and dwelt therein.

30 ¶ And the children of Dan set vp the grauen image: and Ionathan the sonne of Gershom, the sonne of Manasseh, hee and his sonnes, were Priests to the tribe of Dan, vntill the day of the captiuitie of the land.

31 And they set them vp Micahs grauen image, which hee made, all the time that the house of God was in Shiloh.

The Danites seek to enlarge their inheritance, and rob Micah.

- The Danites determined to take Micah's gods with them. Oh the folly of these Danites! How could they imagine those gods should protect them, that could not keep themselves from being stolen! To take them for their own use, was a double crime; it showed they neither feared God, nor regarded man, but were lost both to godliness and honesty. What a folly was it for Micah to call those his gods, which he had made, when He only is to be worshipped by us as God, that made us! That is put in God's place, which we are concerned about, as if our all were bound up in it. If people will walk in the name of their false gods, much more should we love and serve the true God!

View All Discussusion for Judges Chapter 18... 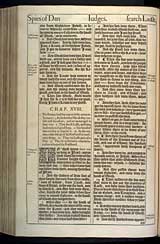