1 Then went Samson to Gaza, and saw there an harlot, and went in vnto her.

2 And it was told the Gazites, saying, Samson is come hither. And they compassed him in, and layd wait for him all night in the gate of the citie, and were quiet all the night, saying, In the morning when it is day, we shall kill him.

3 And Samson lay till midnight, and arose at midnight, and tooke the doores of the gate of the city, and the two posts, and went away with them, barre and all, and put them vpon his shoulders, and caried them vp to the toppe of an hill that is before Hebron.

4 ¶ And it came to passe afterward, that he loued a woman in the valley of Sorek, whose name was Delilah.

5 And the lords of the Philistines came vp vnto her, and said vnto her, Entice him, and see wherein his great strength lieth, and by what meanes we may preuaile against him, that we may bind him, to afflict him: and we will giue thee euery one of vs, eleuen hundreth pieces of siluer.

6 ¶ And Delilah said to Samson, Tel me, I pray thee, wherein thy great strength lyeth, and wherewith thou mightest be bound, to afflict thee.

7 And Samson said vnto her, If they binde mee with seuen greene withs, that were neuer dried, then shall I be weake, and be as another man.

8 Then the lords of the Philistines brought vp to her seuen greene withs, which had not bene dried, & she bound him with them.

9 Now there were men lying in wait, abiding with her in the chamber: and she said vnto him, The Philistines be vpon thee, Samson. And he brake the withs, as a threed of tow is broken, when it toucheth the fire: so his strength was not knowen.

11 And he said vnto her, If they bind me fast with newe ropes that neuer were occupied, then shall I bee weake, and be as another man.

12 Delilah therfore tooke new ropes, and bound him therewith, and said vnto him, The Philistines be vpon thee, Samson. (And there were liers in wait abiding in the chamber.) and hee brake them from off his armes, like a threed.

13 And Delilah said vnto Samson, Hitherto thou hast mocked me, and told me lies: tell me wherewith thou mightest be bound. And he said vnto her, If thou weauest the seuen lockes of my head with the web.

14 And she fastened it with the pinne, and said vnto him, The Philistines be vpon thee, Samson. And hee awaked out of his sleepe, and went away with the pinne of the beame, & with the web.

15 ¶ And shee said vnto him, How canst thou say, I loue thee, when thine heart is not with mee? Thou hast mocked mee these three times, and hast not told me wherin thy great strength lieth.

16 And it came to passe, when she pressed him daily with her wordes, and vrged him so that his soule was vexed vnto death,

17 That he told her all his heart, and said vnto her, There hath not come a rasor vpon mine head: for I haue bene a Nazarite vnto God from my mothers wombe: If I bee shauen, then my strength will goe from me, and I shall become weake, and bee like any other man.

19 And she made him sleepe vpon her knees, and she called for a man, and she caused him to shaue off the seuen lockes of his head, and she began to afflict him, and his strength went from him.

20 And she said, The Philistines be vpon thee, Samson. And hee awoke out of his sleepe, and said, I will go out as at other times before, and shake my selfe. And he wist not that the Lord was departed from him.

21 ¶ But the Philistines tooke him and put out his eyes, and brought him downe to Gaza, and bound him with fetters of brasse, and he did grind in the prison house.

22 Howbeit, the haire of his head began to grow againe, after he was shauen.

23 Then the lords of the Philistines gathered them together, for to offer a great sacrifice vnto Dagon their god, and to reioyce: for they said, Our god hath deliuered Samson our enemy into our hand.

24 And when the people saw him, they praised their god: for they said, Our god hath deliuered into our hands our enemy, and the destroyer of our countrey, which slew many of vs.

25 And it came to passe when their hearts were merry, that they said, Call for Samson, that hee may make vs sport. And they called for Samson out of the prison house, and he made them sport, and they set him betweene the pillars.

26 And Samson said vnto the lad that held him by the hand, Suffer mee, that I may feele the pillars whereupon the house standeth, that I may leane vpon them.

27 Now the house was full of men and women, and all the lords of the Philistines were there: and there were vpon the roofe about three thousand men and women, that behelde while Samson made sport.

28 And Samson called vnto the Lord, and said, O Lord God, remember me, I pray thee, & strengthen mee, I pray thee, onely this once, O God, that I may be at once auenged of the Philistines, for my two eyes.

29 And Samson tooke hold of the two middle pillars, vpon which the house stood, and on which it was borne vp, of the one with his right hand, and of the other with his left.

30 And Samson said, Let me die with the Philistines: & he bowed himselfe with all his might: and the house fel vpon the lords, and vpon all the people that were therein: so the dead which he slew at his death, were moe, then they which he slew in his life.

31 Then his brethren, and all the house of his father, came downe, and tooke him, and brought him vp, and buried him betweene Zorah and Eshtaol, in the burying place of Manoah his father: and hee iudged Israel twentie yeeres.

Samson's escape from Gaza. (1-3) Samson enticed to declare his strength lay. (4-17) The Philistines take Samson, and put out his eyes. (18-21) Samson's strength is renewed. (22-24) He destroys many of the Philistines. (25-31)1-3 Hitherto Samson's character has appeared glorious, though uncommon. In this chapter we find him behaving in so wicked a manner, that many question whether or not he were a godly man. But the apostle has determined this, #Heb 11:32|. By adverting to the doctrines and examples of Scripture, the artifices of Satan, the deceitfulness of the human heart, and the methods in which the Lord frequently deals with his people, we may learn useful lessons from this history, at which some needlessly stumble, while others cavil and object. The peculiar time in which Samson lived may account for many things, which, if done in our time, and without the special appointment of Heaven, would be highly criminal. And there might have been in him many exercises of piety, which, if recorded, would have reflected a different light upon his character. Observe Samson's danger. Oh that all who indulge their sensual appetites in drunkenness, or any fleshly lusts, would see themselves thus surrounded, way-laid, and marked for ruin by their spiritual enemies! The faster they sleep, the more secure they feel, the greater their danger. We hope it was with a pious resolution not to return to his sin, that he rose under a fear of the danger he was in. Can I be safe under this guilt? It was bad that he lay down without such checks; but it would have been worse, if he had laid still under them.

4-17 Samson had been more than once brought into mischief and danger by the love of women, yet he would not take warning, but is again taken in the same snare, and this third time is fatal. Licentiousness is one of the things that take away the heart. This is a deep pit into which many have fallen; but from which few have escaped, and those by a miracle of mercy, with the loss of reputation and usefulness, of almost all, except their souls. The anguish of the suffering is ten thousand times greater than all the pleasures of the sin.

18-21 See the fatal effects of false security. Satan ruins men by flattering them into a good opinion of their own safety, and so bringing them to mind nothing, and fear nothing; and then he robs them of their strength and honour, and leads them captive at his will. When we sleep our spiritual enemies do not. Samson's eyes were the inlets of his sin, (ver. #1|,) and now his punishment began there. Now the Philistines blinded him, he had time to remember how his own lust had before blinded him. The best way to preserve the eyes, is, to turn them away from beholding vanity. Take warning by his fall, carefully to watch against all fleshly lusts; for all our glory is gone, and our defence departed from us, when our separation to God, as spiritual Nazarites, is profaned.

22-24 Samson's afflictions were the means of bringing him to deep repentance. By the loss of his bodily sight the eyes of his understanding were opened; and by depriving him of bodily strength, the Lord was pleased to renew his spiritual strength. The Lord permits some few to wander wide and sink deep, yet he recovers them at last, and marking his displeasure at sin in their severe temporal sufferings, preserves them from sinking into the pit of destruction. Hypocrites may abuse these examples, and infidels mock at them, but true Christians will thereby be rendered more humble, watchful, and circumspect; more simple in their dependence on the Lord, more fervent in prayer to be kept from falling, and in praise for being preserved; and, if they fall, they will be kept from sinking into despair.

25-31 Nothing fills up the sins of any person or people faster than mocking and misusing the servants of God, even thought it is by their own folly that they are brought low. God put it into Samson's heart, as a public person, thus to avenge on them God's quarrel, Israel's, and his own. That strength which he had lost by sin, he recovers by prayer. That it was not from passion or personal revenge, but from holy zeal for the glory of God and Israel, appears from God's accepting and answering the prayer. The house was pulled down, not by the natural strength of Samson, but by the almighty power of God. In his case it was right he should avenge the cause of God and Israel. Nor is he to be accused of self-murder. He sought not his own death, but Israel's deliverance, and the destruction of their enemies. Thus Samson died in bonds, and among the Philistines, as an awful rebuke for his sins; but he died repentant. The effects of his death typified those of the death of Christ, who, of his own will, laid down his life among transgressors, and thus overturned the foundation of Satan's kingdom, and provided for the deliverance of his people. Great as was the sin of Samson, and justly as he deserved the judgments he brought upon himself, he found mercy of the Lord at last; and every penitent shall obtain mercy, who flees for refuge to that Saviour whose blood cleanses from all sin. But here is nothing to encourage any to indulge sin, from a hope they shall at last repent and be saved.

View All Discussusion for Judges Chapter 16... 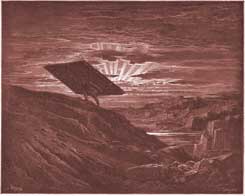 Samson Carries away the Gates of Gaza 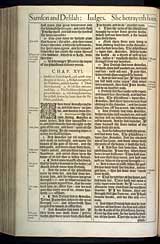