1 But it came to passe within a while after, in the time of wheat haruest, that Samson visited his wife with a kid, and he said, I will goe in to my wife into the chamber. But her father would not suffer him to goe in.

2 And her father saide, I verily thought that thou haddest vtterly hated her, therfore I gaue her to thy companion: is not her younger sister fairer then she? take her, I pray thee, in stead of her.

3 ¶ And Samson said concerning them, Now shal I be more blamelesse then the Philistines, though I do them a displeasure.

4 And Samson went and caught three hundred foxes, and tooke firebrands, and turned taile to taile, and put a firebrand in the midst betweene two tailes.

6 ¶ Then the Philistines saide, Who hath done this? and they answered, Samson the sonne in law of the Timnite, because hee had taken his wife, and giuen her to his companion. And the Philistines came vp, and burnt her and her father with fire.

7 ¶ And Samson said vnto them, Though ye haue done this, yet will I be auenged of you, and after that, I wil cease.

8 And he smote them hip and thigh, with a great slaughter; and hee went down and dwelt in the top of the rocke Etam.

9 ¶ Then the Philistines went vp, and pitched in Iudah, and spread themselues in Lehi.

10 And the men of Iudah said, Why are ye come vp against vs? and they answered, To bind Samson are we come vp, to doe to him, as he hath done to vs.

11 Then three thousand men of Iudah went to the top of the rocke Etam, and sayd to Samson; Knowest thou not that the Philistines are rulers ouer vs? What is this that thou hast done vnto vs? And he said vnto them, As they did vnto me, so haue I done vnto them.

12 And they said vnto him, Wee are come downe to binde thee, that we may deliuer thee into the hand of the Philistines. And Samson said vnto them, Sweare vnto me, that yee will not fall vpon me your selues.

13 And they spake vnto him, saying; No: but wee will binde thee fast, and deliuer thee into their hand: but surely we will not kill thee. And they bound him with two new cordes, and brought him vp from the rocke.

14 ¶ And when he came vnto Lehi, the Philistines shouted against him: and the Spirit of the Lord came mightily vpon him, and the cordes that were vpon his armes became as flaxe that was burnt with fire, & his bands loosed from off his hands.

15 And he found a new iawbone of an asse, and put foorth his hand, and tooke it, and slewe a thousand men therewith.

16 And Samson said, With the iawbone of an asse, heapes vpon heapes, with the iaw of an asse haue I slaine a thousand men.

17 And it came to passe when he had made an end of speaking, that hee cast away the iaw bone out of his hand, and called that place Ramath-Lehi.

19 But God claue an hollow place that was in the iawe, and there came water thereout, & when he had drunke, his spirit came againe, and he reuiued: wherefore hee called the name thereof En-hakkore, which is in Lehi, vnto this day:

20 And he iudged Israel in the dayes of the Philistines twentie yeeres.

Samson is denied his wife, He smites the Philistines. (1-8) Samson kills a thousand of the Philistines with a jaw-bone. (9-17) His distress from thirst. (18-20)1-8 When there are differences between relations, let those be reckoned the wisest and best, who are most forward to forgive or forget, and most willing to stoop and yield for the sake of peace. In the means which Samson employed, we must look at the power of God supplying them, and making them successful, to mortify the pride and punish the wickedness of the Philistines. The Philistines threatened Samson's wife that they would burn her and her father's house. She, to save herself and oblige her countrymen, betrayed her husband; and the very thing that she feared, and by sin sought to avoid, came upon her! She, and her father's house, were burnt with fire, and by her countrymen, whom she thought to oblige by the wrong she did to her husband. The mischief we seek to escape by any unlawful practices, we often pull down upon our own heads.

9-17 Sin dispirits men, it hides from their eyes the things that belong to their peace. The Israelites blamed Samson for what he had done against the Philistines, as if he had done them a great injury. Thus our Lord Jesus did many good works, and for those the Jews were ready to stone him. When the Spirit of the Lord came upon Samson, his cords were loosed: where the Spirit of the Lord is, there is liberty, and those are free indeed who are thus set free. Thus Christ triumphed over the powers of darkness that shouted against him, as if they had him in their power. Samson made great destruction among the Philistines. To take the bone of an ass for this, was to do wonders by the foolish things of the world, that the excellency of the power might be of God, not of man. This victory was not in the weapon, was not in the arm; but it was in the Spirit of God, which moved the weapon by the arm. We can do all things through Him that strengtheneth us. Seest thou a poor Christian, who is enabled to overcome a temptation by weak, feeble counsel, there is the Philistine vanquished by a sorry jaw-bone.

18-20 So little notice did the men of Judah take of their deliverer, that he was ready to perish for want of a draught of water. Thus are the greatest slights often put upon those who do the greatest services. Samson prayed to God in this distress. Those that forget to attend God their praises, may be compelled to attend him with their prayers. Past experiences of God's power and goodness, are excellent pleas in prayer for further mercy. He pleads his being exposed to God's enemies; our best pleas are taken from God's glory. The Lord sent him seasonable relief. The place of this action was, from the jaw-bone, called Lehi. And in the place thus called, God caused a fountain suddenly and seasonably to open, close by Samson. We should be more thankful for the mercy of water, did we consider how ill we can spare it. Israel submitted to him whom they had betrayed. God was with him; henceforward they were directed by him as their judge.

View All Discussusion for Judges Chapter 15... 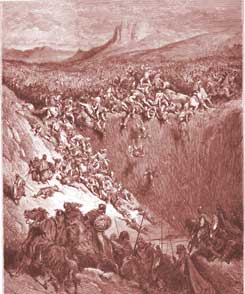 Samson Destroys the Philistines with an Ass' Jawbone 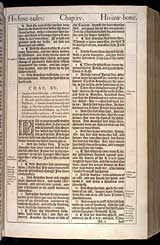