1 And Samson went down to Timnath, and sawe a woman in Timnath, of the daughters of the Philistines.

2 And hee came vp, and told his father and his mother, and said, I haue seene a woman in Timnath, of the daughters of the Philistines: nowe therefore get her for me to wife.

3 Then his father and his mother said vnto him, Is there neuer a woman among the daughters of thy brethren, or among all my people, that thou goest to take a wife of the vncircumcised Philistines? And Samson said vnto his father, Get her for me, for shee pleaseth me well.

4 But his father and his mother knew not that it was of the Lord, that hee sought an occasion against the Philistines: for at that time the Philistines had dominion ouer Israel.

5 ¶ Then went Samson downe, and his father & his mother, to Timnath, and came, to the vineyards of Timnath: and behold, a young Lion roared against him.

6 And the Spirit of the Lord came mightily vpon him, and hee rent him as he would haue rent a kid, and he had nothing in his hand: but hee told not his father or his mother what hee had done.

7 And hee went downe and talked with the woman, and she pleased Samson well.

9 And hee tooke thereof in his handes, and went on eating, and came to his father and mother, and hee gaue them, and they did eate: but he told not them that he had taken the hony out of the carkeis of the Lion.

10 ¶ So his father went downe vnto the woman, and Samson made there a feast: for so vsed the young men to doe.

11 And it came to passe when they saw him, that they brought thirtie companions to be with him.

12 ¶ And Samson said vnto them, I will now put foorth a riddle vnto you: if you can certeinly declare it me, within the seuen dayes of the feast, and finde it out, then I will giue you thirtie sheetes, and thirtie change of garments:

13 But if ye cannot declare it me, then shall yee giue me thirtie sheetes, and thirtie change of garments. And they said vnto him, Put foorth thy riddle, that we may heare it.

14 And hee said vnto them, Out of the eater came foorth meate, aud out of the strong came foorth sweetnesse. And they could not in three dayes expound the riddle.

15 And it came to passe on the seuenth day, that they said vnto Samsons wife, Entice thy husband, that hee may declare vnto vs the riddle, lest we burne thee and thy fathers house with fire: Haue yee called vs, to take that wee haue? is it not so?

16 And Samsons wife wept before him, and said, Thou doest but hate me, and louest me not: thou hast put foorth a riddle vnto the children of my people, and hast not tolde it me. And hee said vnto her, Behold, I haue not tolde it my father nor my mother, and shall I tell it thee?

17 And shee wept before him the seuen dayes, while the feast lasted: and it came to passe on the seuenth day, that he tolde her, because shee lay sore vpon him: and she tolde the riddle to the children of her people.

18 And the men of the city said vnto him on the seuenth day before the sunne went downe, What is sweeter then honie? and what is stronger then a Lion? And he said vnto them, If ye had not plowed with my heifer, yee had not found out my riddle.

19 ¶ And the Spirit of the Lord came vpon him, and hee went downe to Ashkelon, and slewe thirtie men of them, and tooke their spoile, and gaue change of garments vnto them which expounded the riddle, and his anger was kindled; and hee went vp to his fathers house.

20 But Samsons wife was giuen to his companion, whom hee had vsed as his friend.

Samson desires a wife of the Philistines. (1-4) Samson kills a lion. (5-9) Samson's riddle. (10-20)1-4 As far as Samson's marriage was a common case, it was weak and foolish of him to set his affections upon a daughter of the Philistines. Shall one, not only an Israelite, but a Nazarite, devoted to the Lord, covet to become one with a worshipper of Dagon? It does not appear that he had any reason to think her wise or virtuous, or any way likely to be a help meet for him; but he saw something in her agreeable to his fancy. He that, in the choice of a wife, is only guided by his eye, and governed by his fancy, must afterwards thank himself if he find a Philistine in his arms. Yet it was well done not to proceed till Samson had made his parents acquainted with the matter. Children ought not to marry, nor to move towards it, without the advice and consent of their parents. Samson's parents did well to dissuade him from yoking himself unequally with unbelievers. It seems that it pleased God to leave Samson to follow his own inclinations, intending to bring out good from his conduct; and his parents consented, because he was bent upon it. However, his example is not recorded for us to do likewise.

5-9 By enabling him to kill a lion, God let Samson know what he could do in the strength of the Spirit of the Lord, that he might never be afraid to look the greatest difficulties in the face. He was alone in the vineyards, whither he had rambled. Young people consider not how they exposed themselves to the roaring lion that seeks to devour, when they wander from their prudent, pious parents. Nor do men consider what lions lurk in the vineyards, the vineyards of red wines. Our Lord Jesus having conquered Satan, that roaring lion, believers, like Samson, find honey in the carcass abundant strength and satisfaction, enough for themselves, and for all their friends.

10-20 Samson's riddle literally meant no more than that he had got honey, for food and for pleasure, from the lion, which in its strength and fury was ready to devour him. But the victory of Christ over Satan, by means of his humiliation, agonies, and death, and the exaltation that followed to him, with the glory thence to the Father, and spiritual advantages to his people, seem directly alluded to. And even death, that devouring monster, being robbed of his sting, and stripped of his horror, forwards the soul to the realms of bliss. In these and other senses, out of the eater comes forth meat, and out of the strong, sweetness. Samson's companions obliged his wife to get the explanation from him. A worldly wife, or a worldly friend, is to a godly man as an enemy in the camp, who will watch every opportunity to betray him. No union can be comfortable or lasting, where secrets cannot be intrusted, without danger of being divulged. Satan, in his temptations, could not do us the mischief he does, if he did not plough with the heifer of our corrupt nature. His chief advantage against us arises from his correspondence with our deceitful hearts and inbred lusts. This proved an occasion of weaning Samson from his new relations. It were well for us, if the unkindness we meet with from the world, and our disappointments in it, obliged us by faith and prayer to return to our heavenly Father's house, and to rest there. See how little confidence is to be put in man. Whatever pretence of friendship may be made, a real Philistine will soon be weary of a true Israelite.

View All Discussusion for Judges Chapter 14... 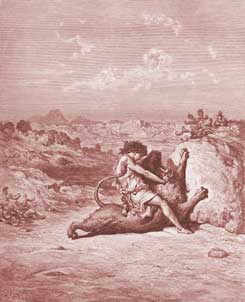 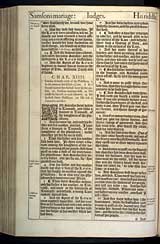